It took the U.S. Food and Drug Administration 108 days to review all the data Pfizer/BioNTech submitted in order to gain FDA approval for its Comirnaty COVID shot, which was licensed August 3, 2021.

Considering the agency claims there are 329,000 pages of data, the fact that they were able to read, analyze and draw conclusions about its safety and effectiveness in just 108 days — about 80,000 pages a month — is no small miracle. They must employ some very efficient speed readers.

And that is why the FDA’s claim that it now needs over half a century to review the documents before they can release them to the public doesn’t seem very credible. Even Reuters has expressed shock, and its former CEO is on the board of Pfizer.1

In September 2021, a group called Public Health and Medical Professionals for Transparency (PHMPT) filed a Freedom of Information Act (FOIA) request with the FDA to obtain the documentation used to approve Comirnaty.

This includes safety and effectiveness data, adverse reaction reports and lists of active and inactive ingredients. Approximately 400 additional FOIA requests by other individuals for all or part of this information have also been filed.2

In their FOIA application, the PHMPT asked the agency to expedite release of the documents — a reasonable request, considering we have no raw data and the shots are being pushed on children as young as 5.

FOIA guidelines include two conditions upon which a request may be expedited. One is “if the lack of expedited treatment could reasonably be expected to pose a threat to someone’s life or physical safety,” which one could easily argue is the case here.

The second condition is “if there is an urgency to inform the public about an actual or alleged federal government activity, if made by a person who is primarily engaged in disseminating information.” This too is clearly applicable.

“During a time when COVID-19 vaccine mandates are being implemented over the objection of those that have questions about the data and information supporting the safety and efficacy of the Pfizer Vaccine, and individuals with these questions are being expelled from employment, school, transportation, and the military, the public has an urgent and immediate need to have access to this data,” the PHMPT said in its request.3

When, after a month, the FDA still had not responded to the FOIA request, the PHMPT sued.4 The FDA is now asking a federal judge to allow them to delay the full release of all documents until 2076 — 55 years from now.

According to the U.S. Department of Justice (DOJ) attorney who represents the FDA in this case, the agency will be able to “provide more pages to more requesters” if allowed to stick to a rolling schedule of 500 pages per month, “thus avoiding a system where a few large requests monopolize finite processing resources.”

They claim they only have 10 employees assigned to FOIA releases, and before material can be released, an FDA official has to go through them and redact any information that might reveal personal information about clinical trial participants and any confidential business or trade secret information.

The 1967 FOIA law requires federal agencies to respond to FOIAs within 20 days unless “unusual circumstances” exist that prevent a timely release. Circumstances that might warrant an extended release schedule include:

The DOJ attorney points out that the court has allowed for a 500-page maximum per month release schedule in other cases, and should allow the FDA the same leeway here.

While it can conduct that intense review of Pfizer’s documents in 108 days, it now asks for over 20,000 days to make these documents available to the public. ~ Aaron Siri, attorney for PHPMT

Plaintiffs, on the other hand, argue the agency should be able to release everything by early March 2022, noting the FDA employs 18,000 people and has an annual budget of $6 billion. Between 2008 and 2017, the agency processed 114,938 FOIA requests, of which it granted 72.4%, either fully or partially.

Of those, 39.8% were designated as “complex,” and 81.5% of these complex FOIA requests were granted in 61 days or more. Considering these historical statistics, a backlog of 400 FOIA requests doesn’t appear excessively burdensome.

Then there’s the sticky issue that it has already proven its capacity for rapid review. Aaron Siri of the law firm Siri & Glimstad wrote in the PHMPT’s court filing:5,6,7,8

It took the FDA precisely 108 days from when Pfizer started producing the records for licensure to when the FDA licensed the Pfizer vaccine. Taking the FDA at its word, it conducted an intense, robust, thorough, and complete review and analysis of those documents in order to assure that the Pfizer vaccine was safe and effective for licensure.

While it can conduct that intense review of Pfizer’s documents in 108 days, it now asks for over 20,000 days to make these documents available to the public …

The entire purpose of the FOIA is to assure government transparency. It is difficult to imagine a greater need for transparency than immediate disclosure of the documents relied upon by the FDA to license a product that is now being mandated to over 100 million Americans under penalty of losing their careers, their income, their military service status, and far worse.”

Two months after the lawsuit against it was filed, the FDA released a batch of 91 pages,9 and if this batch is any indication, it’s not surprising that the FDA wants to slow-walk the release of the rest. In a November 21, 2021, substack article, Kyle Becker cites directly from the released documents:10

“’It is estimated that approximately [REDACTED] doses of BNT162b2 were shipped worldwide from the receipt of the first temporary authorization for emergency supply on 01 December 2020 through 28 February 2021,’ the document states. ‘Cumulatively, through 28 February 2021, there was a total of 42,086 case reports (25,379 medically confirmed and 16,707 non-medically confirmed) containing 158,893 events … 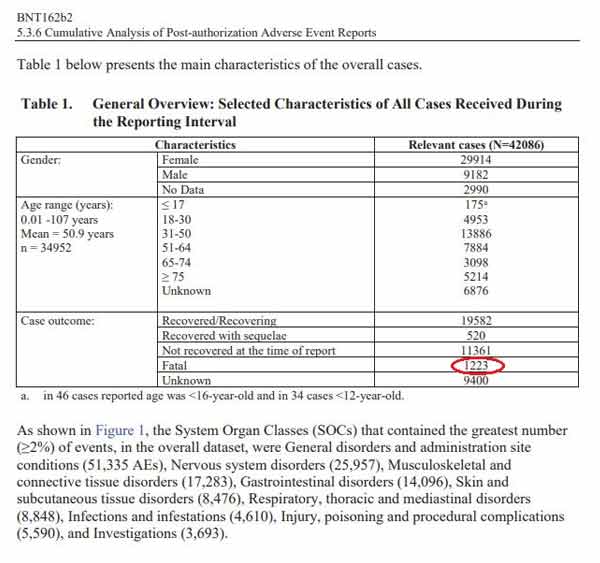 The chart lists 1,223 fatal outcomes in the Relevant Cases. Interestingly, the age range with the most relevant cases was 31-50 years old, which is not the age group considered to be at high risk from COVID-19.”

It’s worth noting that by redacting the specified number of doses shipped, it becomes more difficult to assess the potential ratio of injury. Still, even without that, 42,086 reports of injury, including 1,223 fatalities, are a significant signal in and of itself, especially when you consider that the 1976 swine flu vaccine was pulled after 25 deaths.

It’s even more disturbing when you consider that those 42,086 reports were received by Pfizer in just the first 2.5 months of the shot being rolled out. Pfizer even acknowledges the abnormal rate of injuries, but then sweeps it aside as being of no consequence. As noted by Siri, in a November 19, 2021 substack article, in which he discusses this first batch of documents:11

“Pfizer explains, on page 6, that ‘Due to the large numbers of spontaneous adverse event reports received for the product, [Pfizer] has prioritized the processing of serious cases…’

But no cause for alarm since Pfizer explains to the FDA: ‘The findings of these signal detection analyses are consistent with the known safety profile of the vaccine.’ So, if they knew these issues were going to arise, then why didn’t they appear to have enough staff to process this expected volume of reports?

The grand conclusion by Pfizer to the FDA: ‘The data do not reveal any novel safety concerns or risks requiring label changes and support a favorable benefit risk profile of to the BNT162b2 vaccine.’ Nothing to see here.”

Clearly, there’s plenty to be seen in the hundreds of thousands of documents Pfizer/BioNTech submitted to the FDA. The fact that the FDA is stonewalling and wants 55 years to redact them before they’re fit for public view is telling in and of itself.

You don’t need a fanciful imagination to comprehend what they might be hiding. It almost seems they want to make sure the responsible parties are all dead by the time the full data set is out in the open and people can be held to account for their decisions. Let’s hope the judge is more interested in public health than protecting the FDA’s dirty secrets.