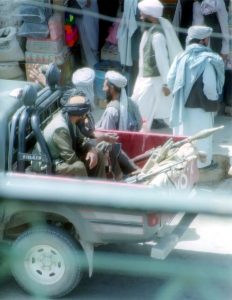 NEW DELHI (Morning Star News) – Threatened with death even before the Taliban took power in mid-August, a young Christian woman who fled to India could be forced to return to Afghanistan when her visa expires in a few days, she said.

Esin (name changed for security reasons), 24, fled Afghanistan just before the Taliban took control in mid-August. Risks of danger for converts were so high that she and her mother and brother only three years ago revealed to each other that they had left Islam to become Christians, as they feared violent backlash from other relatives and neighbors.

As Esin faced the greatest threat from Muslim neighbors threatening to kill her, her family managed to get her onto a flight to India in early August, she said. Her mother, brother and younger sister were in hiding in Afghanistan until they made it to another country this week.

In December 2020 Esin was reading the Bible at home when neighbors intruded into the house saying, “We will kill you…You are a Kafir, we cannot stay with you in the same locality,” she said.

“They found me reading the Bible and were shocked to see that,” Esin told Morning Star News.

A few days later, she said, the family found a message on their house gate: “Stop or we will kill you and your family.”

She received several warnings and threats in text messages on her cell phone, including threats of rape if she continued to follow Christ. The threats became especially chilling one day as she was walking to work, when she fled from a man with a knife who threatened to assault her, though she later learned he also tried to attack non-Christians.

In June, she said, her 7-year-old sister came home terrified, saying her friends wouldn’t walk with her to and from school because their parents had told them Esin was not Muslim, and that one day they would kill her. Esin’s mother then said the family must leave the country.

Esin applied for visa for the entire family, but they had only enough money to send her, she said.

“My mom said that because my life is in danger the most, I must leave first and that they would follow later,” Esin told Morning Star News.

The Taliban seized Kabul a few days later, ratcheting up her concern for her Christian family members.

“In a hurry, from India I booked tickets for them, exhausting the major chunk of money that I had with me, so that my family would not get stuck there,” she said. “My family was all set to leave but, sadly, the flights were all suspended the day they were to leave.”

Afghanistan is second only to North Korea on Christian support organization Open Doors’ 2021 World Watch List of the countries where it is most difficult to be a Christian. Conversion from Islam to another religion is considered apostasy, punishable by death, imprisonment, or confiscation of property.

Esin said her visa will expire soon, and she is meeting with officials to have it extended. She is one of six siblings from a Muslim family whose Christian members have since faced opposition, threats and intimidation.

Esin first heard the name of Jesus when her eldest brother mentioned it on the phone when she was 7 years old. Growing up without internet access in a country where selling Bibles was restricted, she could not pursue her natural curiosity about Christ, she said.

Her inquisitive nature led her to question Islam, and by the time she was challenging her university religious studies professors about the religion, several of her friends stopped associating with her and labeled her an “infidel,” she said.

Esin did not hear the name of Christ again until 2017, when a girl from the Philippines mentioned it; Esin insisted she tell her about Him. The next year, Esin began to believe in Jesus Christ with conviction.

“I lost myself, but fortunately my Father searched for me, found me and showed me the Way,” Esin said. “I am so grateful that now I am a Christian girl.”

Her older brother was a secret believer for years before she learned of his faith. He had left the war-crushed country in the late 1990s – the devastation was such that he left at age 11 in search of work – and had met Christians in China, Italy and Iran. He mostly rejected their efforts to give him aid because they were Christians, she said.

In Iran, he rebuffed a Christian who asked if he could pray for him, but two months later he accepted an offer from the same man to attend a prayer meeting.

“At the end of the meeting, the pastor offered to pray upon those who wished for it,” Esin said. “My brother said in his heart that if Jesus Christ brought comfort and peace to his heart, he will accept Him as his God; or else He will remain [just] a prophet for him.”

That night her brother sensed God’s touch; he felt his burdens and problems vanish, and he had the most peaceful sleep of his life, Esin said. He asked for a Bible from the Iranian and began to read it.

When Esin’s brother became a Christian in 2005 and was baptized, he received several threats from colleagues as he boldly professed his faith, though she had yet to learn of his conversion. An Afghan whom her brother had met in China found out about his faith and telephoned his own family in Afghanistan, informing them of the conversion, she said. He told his relatives to either drive Esin’s family away from the village or kill them.

At the time, no one in the family knew that the father was a secret Christian. When Esin’s brother phoned his father and revealed that he had become a Christian, she said, his father replied, “I am so happy, I know you have chosen the correct Way. For security reasons I could not tell others [of my own faith in Christ]. I feared and could not risk the lives of the other members of the family.”

Though Esin’s father did not tell anyone else that he was a secret Christian, he encouraged her when she brought a Bible home and started to read it. Esin did not get the opportunity to talk with her father about his faith, because he died the same year she became a Christian in 2018, she said.

That year she found out her older brother had a Bible and studied it regularly. Only then did Esin, her mother and brother tell each other of their faith in Christ, she said.

Esin said she believes with all her heart that she will be reunited with her mother, brother, and younger sister.

“I have hope and I will continue to kindle this hope, because the day my hope is lost, my faith is lost,” she said.