You are here: Home » Babylon » 1st Beast » The Dark Pearl from Out of the Deep
Share this post: 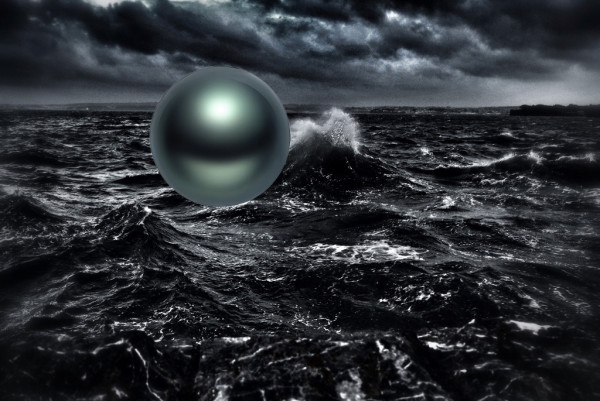 I had a dream back in 2007-2008.  I saw what I thought was an angel gliding down from above.  It was framed somehow as if I was looking through a window.  I was amazed.  It came from the right upper side across to the left lower side.

I then noticed that it didn’t shine, no glory attending.  It had a luster, as if from within.  I noticed that it did not have a face, but instead it looked like a dark pearl, a black pearl.  I was wondering what it actually was and why?

Then I heard this, “Test the spirit.”

As soon as that came, without a chance to wake up, I heard, “This is an angel of light.”

Since that time there has been much controversy about where Obama really came from, without any substantial evidence being offered.  In a speech he told the audience he came from Krypton. We are told he may have been born in Kenya or Hawaii. Have we seen authentic documents to support his birth, or records of any kind that place him anywhere? NO. The long form birth certificate posted on the White House website has been proven by a panel of experts to be a forgery. His birth records, school records, all of his background information has been cloaked and sealed.

Have we seen the real Mr O? NO. Do we know anything about him, really? NO. He is the faceless dark pearl from out of the deep, the sea. We have not yet seen the completion of his identity, or his work.

What I feel this dream spoke to me is that the one that comes from the sea is here now.

I believe the dream spoke symbolically of this dark pearl which represents dark wisdom. This fallen entity did not have a face, so it was not recognizable. It was able to transform itself into an angel of light. What did Mr. O run his campaign on?  Hope and change! He speaks the language of transformation.

Understand that the one who comes, comes in the spirit of Nimrod (antichrist).  That is evident, and that speaks of the establishment of Babylon. I believe we have the man, and we have the place that he comes from, now. I believe he is  the one that will become, and he is coming out of America, which I believe is Mystery Babylon.

Many are beginning to recognize and ponder these things. We must  be led by the Holy Spirit, through scripture and prayer, that we may discern the times.

And I  beheld another beast coming up out of the earth and he had two horns like a lamb, and he spake as a dragon.(Revelation 13:11)

Neither shall he regard the God of  his fathers, nor the desire of women, nor regard any god; for he shall magnify himself above all. (Daniel 11:37)

Then he brought me to the door of the gate of the LORD’S house which wastoward the north; and, behold, there sat women weeping for Tammuz. (Ezekiel 8:14)

For thou hast said in thine heart, I will ascend into heaven, I will exalt my throne above the stars of God: I will sit also upon the mount of the congregation, in the sides of the north: I will ascend above the heights of the clouds; I will be like the most High. (Isaiah 14:13,14.)

Again, the kingdom of heaven is like unto a merchant man, seeking goodly pearls: Who, when he had found one pearl of great price, went and sold all that he had, and bought it. (Matthew 13:45,46)

Bless you in the name of Jesus Christ. May all the visions and dreams you have or will have lead you deeper into the knowledge of Christ and in the purposes of God in your life. Bless you, sister.

Karen,
Thank-you for all of your Visions and interpretations. They provide much insight.

JM, I believe that you just spoke into my life, and I am sure Linda’s life also. I knew it when I read it early this morning, yet waited a while to let it come over me, because it was personal and from the heart, and spirit. Funny thing, what came to mind is loving your neighbor as yourself. Luke 27:10 And he answering said, Thou shalt love the Lord thy God with all thy heart, and with all thy soul, and with all thy strength, and with all thy mind; and thy neighbour as thyself. This was my very first standing verse, ever. Some years later the Lord gave me another standing verse, Proverbs 4:23 Keep thy heart with all diligence; for out of it are the issues of life. Then some time after that, my calling card, as I call it. Psalm 134 Behold, bless ye the Lord, all ye servants of the Lord, which by night stand in the house of thee Lord. Lift up your hands in the sanctuary, and bless the Lord. The Lord that made heaven and earth bless thee out of Zion. These things are available to all. We can love, guard our hearts, and intercede.

I followed a link from the Black Cube article posted by Linda. I found the VC material and in that I found a link about the curse of the black pearl. I never saw any of these films, but it is in reference to the ‘pirates’ and I just found this today, after the Dark Pearl article. A coincidence?
https://en.wikipedia.org/wiki/Pirates_of_the_Caribbean:_The_Curse_of_the_Black_Pearl

Linda and jm, I held onto this dream for several years. I felt that I was to wait, or keep it to myself for all this time. Even after the dream, although I knew what it meant, I didn’t need to be convinced, although I knew nothing else. I believe that God is pouring out His spirit. Since that time I have learned more and had many more dreams along this line, and it seems that now is the time to recall them and give pen to them that I can share them with others. jm, did you share something about Lake Victoria? If you did, I don’t know what article I posted a comment on, concerning the Nile. If it was you, then I ask you if you knew that there is a place on the Nile, not sure which part, but that it actually flows backward?