Jessica Berg Wilson, a 37-year-old stay-at-home mother from Washington, was a healthy and vibrant woman, according to her family who said she passed away suddenly on Sept. 7. A family member said doctors diagnosed her with vaccine-induced thrombotic thrombocytopenia (VITT).

VITT is a blood-clotting condition triggered by COVID vaccines that is sometimes fatal.

In an exclusive interview with The Defender, Tom Wilson, Jessica’s husband, and Thomas Invancie, her uncle, said Twitter’s fact-checkers — who have never spoken with their family to verify Jessica’s story — affixed “misleading” and “misinformation” labels to her obituary.

On Sept. 2, Jessica went to a Seattle pharmacy to get her COVID vaccine and was told she would be receiving the Johnson & Johnson (J&J) shot. Jessica had no underlying health conditions, her husband said.

Jessica was “vehemently opposed” to taking the vaccine, “considering her stay-at-home mom status, state of good health and young age in conjunction with the known and unknown risk of an unproven vaccine,” Wilson said.

But Jessica was pressured to get the vaccine due to a vaccine mandate at their child’s school requiring “room moms” who wished to serve in the classroom be fully vaccinated.

In an email to The Defender, Ivancie said Jessica immediately became ill after receiving J&J’s vaccine, and went to the emergency room at UW Medical Center.

“Jessica explained she had been vaccinated and was suffering various severe symptoms,” Invancie said. “Attending doctors kept her isolated for hours, insisted on giving her a COVID test and sent her home. They did not pursue any other protocol, even though Jessica protested.”

Once at home, Jessica fell into a coma and was taken by ambulance and admitted to Harborview Medical Center in Seattle, where doctors diagnosed her with VITT. A team of doctors worked to relieve pressure on Jessica’s brain, but ultimately, they determined she was brain dead, and life support was removed.

As a young mother, Jessica was a dedicated listener to Robert F. Kennedy Jr.’s “RFK, Jr. The Defender” podcast. She was well-informed about COVID vaccines and adamantly opposed to getting the injections, Ivancie said.

In Ivancie’s eulogy he said:

“Jessica died as a direct result of an experimental vaccine — a vaccine that she vehemently opposed taking. Jessica felt coerced. She felt robbed of her ability to choose. Her ability to say ‘no’ — to say no to a medical procedure she did not want — was taken from her.”

“During the last weeks of her life, the world turned dark with heavy-handed vaccine mandates. Local and state governments were determined to strip away her right to consult her wisdom and enjoy her freedom.

“Her passion to be actively involved in her children’s education — which included being a room mom in her child’s classroom — was, once again, blocked by government mandate.”

“Due to coercive pressure from the Seattle Catholic grade school and the Archdiocese of Seattle, she relented to taking the injection,” Ivancie said.

Ivancie said Jessica “was informed she could not enter her daughters’ school campus for any reason unless vaccinated, and as a dutiful mother, Jessica wanted to be able to take her children to school and volunteer there as needed. Thus, under duress, she relented and took the vaccine.”

Jessica’s husband said he received Pfizer’s vaccine “several months back” because his work involved traveling and being around a lot of people.

“It was best for our family that I got the vaccine,” Wilson said. But Jessica was “in a limited bubble as a stay-at-home mom, was of a young age and was concerned about the unproven nature of these vaccines.”

“She didn’t feel it was needed for her,” Wilson said. “But then as the mandates came out, Jessica and those mothers who are very very involved in their children’s lives — she wanted to be involved in every step of their lives. That was her main priority, her kids.”

In a memorial to his wife, Wilson wrote:

“Ultimately, this one-size-fits-all government policy cost Jessica her life, my children their mother, me my forever love and resulted in the loss of a very special person who touched many and was just making her dent felt on this world.”

“My view on this whole story is — I want the world leaders to take notice because Jessica’s life is irreplaceable. There was a high value on her life and what she did for our family and for others. She touched a lot of people and there’s no replacing Jessica.

“I just hope that those people who are in control, who are setting these mandates at the top, are listening to her story and how we can protect the next Jessica from having to take this vaccine should they not think it’s necessary for them.”

Wilson said physicians at the hospital “100%” recognized she had a vaccine adverse event and told him they reported it to the Vaccine Adverse Event Reporting System managed by the Centers for Disease Control and Prevention. Yet, no government official has contacted him about the report, he said.

Twitter was slammed on Monday for fact-checking Jesscia’s obituary, which attributed her death to blood clots brought on by J&J’s vaccine, the New York Post reported.

The tribute, published by The Oregonian, said the mother of two died from “COVID-19 vaccine-induced thrombotic thrombocytopenia.” It was marked as “misleading” by the social media giant over the weekend, according to Twitter users.

Twitter fact-checkers put a “misleading” label on Jessica’s obituary and prevented people from replying to, sharing or liking the tweet. 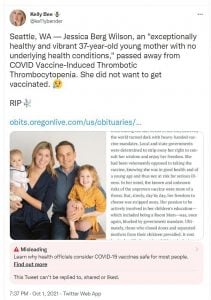 The fact-check warning was removed by Twitter on Monday morning following the backlash.

Wilson said he’s not on social media, but said he was disgusted when he learned from others that his wife’s obituary was being censored by big tech companies for being “misleading” or for containing “misinformation.”

Ivancie said he also received reports that Facebook was censoring Jessica’s obituary, and confirmed the family had not been contacted by fact-checkers from either tech company to verify Jessica’s story.

Ivancie said, “When you can’t have the truth come out, you’re thwarting people’s ability to make decisions. It is scary how these entities have the power to censor.”

Ivancie said it feels like a second death — a death of the truth at the hands of these massive powerful entities. “Imagine if we had a free and open exchange of truth, how this could change the narrative for others,” Ivancie said.

“We aren’t telling people not to get vaccinated,” Jessica’s husband said, “that’s not what we’re doing. We want people to understand Jessica’s story and her right to choose, and in her mind, she had no choice in the matter with all these mandates.”

“We’re just hoping people in these positions of power setting these mandates will listen to our story,” he said.