You are here: Home » Prophecies » Islamic Jihad » Europeans finally fighting back, but is it too little too late?
Share this post: 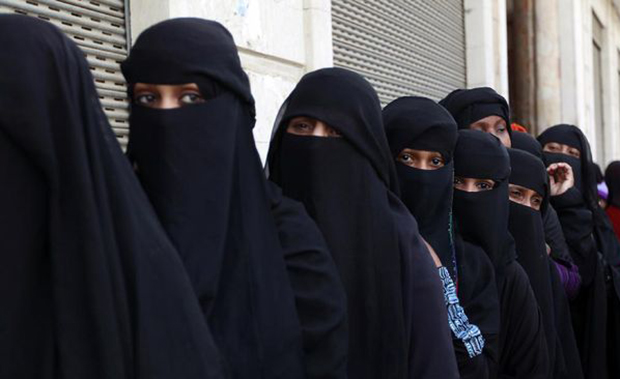 In the aftermath of the Islamic invasion of Europe, which accelerated dramatically in 2015 and 2016, some European nations are finally fighting back against Islamic jihad, taking actions to defend their people from increased diseases and crimes, including murder, theft, rapes, child molestation, and terrorist attacks, directly attributed to Islamic migrants. The Netherlands took a small step this week by passing a new law banning burqas in public buildings. Burqas are garments worn by Muslim women, covering their faces.

The Dutch Senate has approved a law that bans the wearing of “face-covering clothing” in public buildings, including hospitals, schools and government offices, as well as on public transportation.

Although the ban does not extend to public streets, the law authorizes police to ask individuals to remove face-covering clothing to establish their identity.

The new law, previously adopted by the Dutch House of Representatives in November 2016, was approved on June 26 by 44 to 31 votes in the 75-seat Senate.

In a statement, the government, which has not yet said when the law will enter into effect, explained its purpose:

“In a free country like the Netherlands, everyone has the freedom and space to behave and dress as he or she desires. Sometimes, limits can and must be imposed on that freedom. In the case of face-covering clothing, this applies in particular if mutual communication is impeded or safety is jeopardized.

“Mutual communication whereby people can look each other in the face is so important that uniform rules have now been laid down by law. This makes it clear to everyone what is and is not allowed in those situations.” (Source: gatestoneinstitute.org)

Legislators are challenged with balancing the safety of their people with the freedom to practice religious beliefs. However, no one should have the right to practice a religion that calls for harming and even murdering innocent people, as Islam does in the Koran.

Contrary to many false claims made by our elected representatives, Islam is not a religion of peace. The only Muslims who are peaceful are those who are backslidden, negligent in their practice of what the Koran instructs. Anyone who faithfully practices what the Koran instructs will become extremely dangerous and violent because the Koran instructs them to seize and slay non-Muslims, strike their necks, behead them, instill terror into their hearts, cut off their fingertips, proclaim a woeful punishment upon them, arrest them, besiege them, lie in ambush against them, fight against them, force them to pay a tribute to their Muslim overlords, humble them, humiliate them, be harsh with them, murder them, make wide slaughter among them, be ruthless to them, and deal sternly with them. These commands are recorded in the following verses of the Koran.

Slay them wherever ye find them and drive them out of the places whence they drove you out, for persecution is worse than slaughter. (Koran 2:191)

But if they turn renegades, seize them and slay them wherever you find them. (Koran 4:89)

If you encounter those who disbelieve, strike their necks… behead them. (Koran 7:4)

Give firmness to the believers: I will instill terror into the hearts of the unbelievers. You smite them above their necks and smite all their fingertips off them. (Koran 8:12)

Strike terror into the hearts of the enemies of God (Allah) and your enemies and others. (Koran 8:60)

It is not for any Prophet to have captives until he has made slaughter in the land. (Koran 8:67)

When the sacred months are over, slay the idolaters wherever you find them. Arrest them, besiege them, and lie in ambush everywhere for them. (Koran 9:5)

Fight against such of those who have been given the Scripture as believe not in Allah nor the Last Day, and forbid not that which Allah hath forbidden by His messenger, and follow not the Religion of Truth, until they pay the tribute readily, being brought low.  (Koran 9:29)

Fight those who believe not in Allah nor the Last Day, nor hold that forbidden which hath been forbidden by Allah and His Messenger, nor acknowledge the religion of Truth, (even if they are) of the People of the Book, until they pay the Jizya with willing submission, and feel themselves subdued. (Koran 9:29)

Note: Jizya is the money that non-Muslims must pay to their Muslim overlords in a pure Islamic state.)

Another translation of Koran 9:29 – Fight those who believe neither in God nor the Last Day, nor what has been forbidden by God and his messenger, nor acknowledge the religion of Truth, even if they are People of the Book, until they pay the tribute and have been humbled. (Koran 9:29)

Another translation of Koran 9:29 – Humiliate the non-Muslims to such an extent that they surrender and pay tribute. (Koran 9:29)

O Prophet! Make war on the unbelievers and the hypocrites. Be harsh with them. Their ultimate abode is hell, a hapless journey’s end. (Koran 9:73)

Allah has purchased of their faithful lives and worldly goods, and in return has promised them the Garden. They will fight for His cause, kill and be killed. (Koran 9:111)

Believers! Make war on the infidels who dwell around you. Let them find harshness in you. (Koran 9:123)

Another translation of Koran 9:123 – Ye who believe! Murder those of the disbelievers. (Koran 9:123)

When you meet the unbelievers, smite their necks (cut off their heads), then when you have made wide slaughter among them, tie fast the bonds, then set them free, either by grace or ransom, until the war lays down its burdens. (Koran 47:4)

Another translation of Koran 47:4 – When you meet the unbelievers in the battlefield, strike off their heads, and when you have laid them low, bind your captives firmly.  (Koran 47:4)

“Mohammed is God’s apostle. Those who follow him are ruthless to the unbelievers but merciful to one another” (Koran 48:29)

Prophet! Make war on the unbelievers and the hypocrites and deal sternly with them. Hell shall be their home, evil their fate. (Koran 66:9)

Satan does not want anyone to know the truth about Islam, so he sends out his minions throughout the earth proclaiming Islam is a religion of peace and brings a harsh reproach against anyone exposing the truth, which is why sites like YouTube, Facebook, and Twitter are now joining in the Islamic jihad to silence the voices of anyone who dares to speak the truth by simply reporting what the Koran teaches. I thank God the people of the Netherlands are taking actions to restrain those who murder the innocent in the name of God. It’s a small step, but at least it’s a step in the right direction.