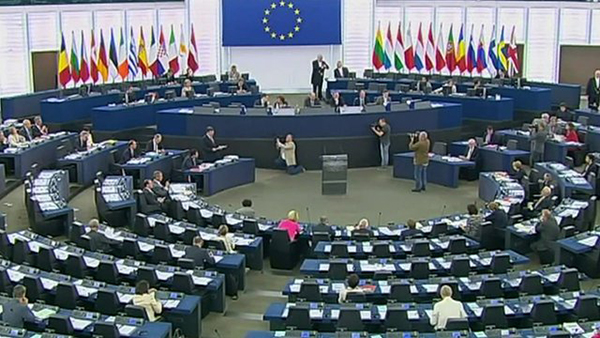 For anyone wondering why European nations opened their borders in recent years to an invasion of young Islamic males from Middle Eastern nations, the answer is getting clearer. The globalist agenda appears to be to first open the borders to increase Islamic attacks upon citizens, then use that as an excuse to ban gun ownership.

A press release from the European Commission yesterday announced the European Parliament and Council has reached a political agreement to make it harder to legally acquire high capacity firearms in the European Union. The agreement includes:

President Jean-Claude Juncker said, “We have fought hard for an ambitious deal that reduces the risk of shootings in schools, summer camps or terrorist attacks with legally held firearms. Of course we would have liked to go further, but I am confident that the current agreement represents a milestone in gun control in the EU.” (Source: Europa.eu)

The commission identified their goal is to “reduce the probability of dangerous but legally held weapons falling into the hands of criminals and terrorists.” Yet, missing from the commission’s new agreement and from Juncker’s statement is any mention of the connection between opening the borders and the recent increases in violent Islamic rapes and murders of innocent unarmed citizens.

Despite the increased number of attacks by Islamic immigrants, most mainstream political leaders across Europe say open borders underpin the European Union’s social cohesion and enable seamless trade. (Source: Wall Street Journal) No wonder the UK voted in June to exit the EU.

I am sharing the following dream that the Lord gave me about two years ago, about Italy. I live in Italy, and I know things are so shaky, but the main culture is in denial. Like if everything is not their problem… I do not know how to explain it. Here I share it: Dream about Italy and earthquakes: In this dream that the Lord gave me, I will share what is about to happen to this nation if it doesn’t turn back to the one true God. First part: I am sitting in my kitchen watching the news, and I see the journalist talking about a small earthquake that just hit the land. It was an earthquake of 3.5 in the Richter scale. The journalist was saying on the TV that the scare was over, people can go back to their houses, jobs, businesses and everything is back to normal. No major damages to the land, no collapsed buildings. As I was watching the report, I sensed a lot of injustice going around, citizens of class B, people that had everything stolen, suffered injustice. A lot of injustice towards this group of people, mistreated, unwelcome, treated with disgust (Italians and foreigners). They did not suffer the scare because they had nothing anyway. Normal people went back to their daily routines. Second part: I am sitting again on my kitchen, watching the news, and I see the same journalist talking about a second earthquake that just hit the land. The journalist was scared and nobody knew what to do. The earthquake hit the entire land, specially the heart of the country, it was disastrous. The earthquake was a 7.0 on the Richter scale and everything that was up came down. Everything collapsed: churches, famous towers, schools, museums, condominiums, government offices,… Read more »

Either the ignorance makes you wonder how these individuals are decision makers, they are deceived beyond comprehension, they’ve been bought off or someone else is totally in charge.

Most of Europe already has very strict national-level gun restrictions. The only European nation where guns are anywhere near normal is in Switzerland (not in the EU). Certainly this EU level law will add some additional restrictions, but the change will likely primarily be in helping EU nation police get records on people’s gun use from elsewhere in the EU, and create more of an even playing field when it comes to gun laws (rather than the patchwork of heavy restrictions per country that exist now).

To say the purpose of the entire movement of accepting refugees into Europe was to enact a law that only affects a very tiny number of Europeans (not even those who own guns, which is rare enough already, just those who want to sell them), and does not meaningfully change gun ownership in the EU (which was already so restrictive that few own them) seems a stretch. Such a law would have had broad European support before the refugee crisis. They didn’t need this to make it happen.

There is no deception at the top levels of power in the European Union and World ruling class these Luciferians are completely given over by The Most High God to establish and fulfill Biblical prophecy. They are willing participants in the Antichrist regime and their plans made visible to those with eyes to see. We are in the great unveiling of the things the prophet Danial could not see and understand, however those who seek out The true and risen Savior and are redeemed by the blood of our Lord Jesus will be aware and delivered through.

Charles, We should rejoice because the EU was to be a major step towards world government, Trump dislikes the UN, by the way. And the RINO’s said he wasn’t a true conservative!! He’s the quintessential conservative. But will he survive? I don’t see how in light of Bible prophesy. He could be God’s last chance for the church to repent but I don’t see that happening. Where are the Jerry Falwell’s? God couldn’t find a Christian leader to do the job but found Donald Trump who could be the greatest president of all time if the country repents…a BIG IF. The world’s condition is much worse than it was in 1776.

Well, let us remember where the idea of a European Union came from; the desires of peace and economic cooperation among countries tired of war and killing each other, a good thing! I agree that a spiritual vacuum over the years sure hasn’t helped, but there is plenty to mourn in the unraveling of the EU. Satan will use whatever you give him of course, but the U.N is far closer to world government than the EU. The unraveling of faith in governmental structures may have some elements of what’s right, but it’s at the expense of trust and unity and global psychology, out of which comes no good solution either! That’s what sets the stage for Revelation more than anything else, in my opinion. Hearts and minds.

God confused the languages at the tower of Babel. The UN is an effort by the elite to reverse God’s will and play God. Satan, through the A/C, would like to use world government in an effort to rule the world and the sheeple will follow him. God’s sheep know His voice and follow Him.

Thank God that Donald is a new born-again believer!

Still, it’s the Church’s responsibility to pray in the much-needed Revivals (2 Chronicles 7:14).

So, please pray unceasingly, do what HE ask you to do, and let the Holy Spirit work through the church & you to woo people to repentance (John 6:44,65).

PS- Most of Germany and Northern Europe were never part of the old Roman Empire. But the territories of today’s Libya, Egypt, Lebanon, Iraq, Iran and Turkey were.