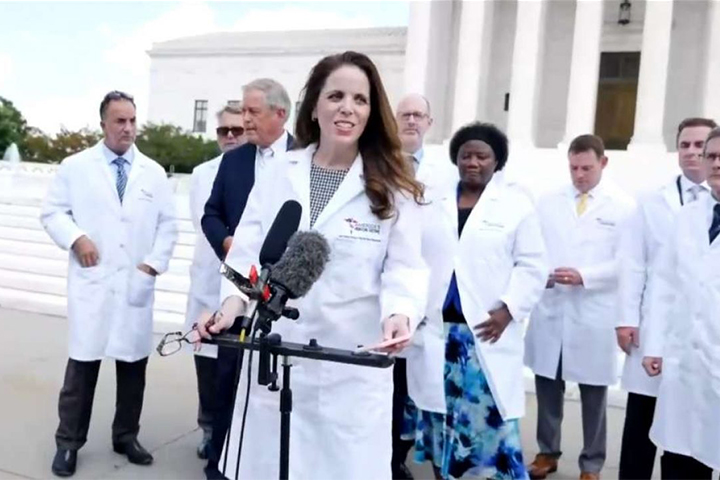 Dr. Simone Gold is a board certified emergency physician and a member of a volunteer organization called America’s Frontline Doctors. In this 56-minute video, she shares alarming facts about COVID-19. This message was shared at The River Church in Tampa FL.

She claims the National Institute of Health (NIH) is lying to us in their policy recommendation for patients infected with COVID-19 by stating, “Unless you are in the hospital requiring oxygen, there is no actual treatment available.” Their statement contradicts the facts that there are proven effective treatments, including hydroxychloroquine and ivermectin.

She cites other examples in which our health officials have acknowledged the existence of hydroxychloroquine but lied about its’ effectiveness and maligned it as unsafe. She explains it has been proven safe and effective based on decades of use as an over the counter drug in many other nations where it has been used for treating illnesses such as malaria, lupus and arthritis.

She has prescribed hydroxychloroquine to her own patients and had great success, but for doing so she was fired from the hospital where she worked. Her supervisor explained that he was firing her because the insurance company for their hospital was discouraging the use of it, even though he had no factual basis for opposing this method of treatment.

She exposes other lies regarding the threat posed by COVID-19. Contrary to the fear mongering from our public health officials, the survival rate for those infected with COVID-19 is extremely high based on the CDC’s own data, which is specifically for people who were infected AND received no treatment.

In addition, she explains that the majority of those whose deaths were reported as being caused by COVID-19 actually had other diseases, co-morbidities, such as pneumonia, causing their deaths.

She also shares other examples of the tyranny being imposed on us, including having her messages banned as soon as she began speaking up and sharing the facts.

First batch of vaccines due in next week and right on Que… lockdown! Starts at midnight.

Matt – Same for Vic .. dan enforced stage 4 L/D again ( over 13 supposedly confirmed botched holiday inn quarantine cases near the airport : returned travellers ,one was asthmatic used a vapour nebuliser in quarantine and now 13 cases who they think – some INFECTED carry the UK VARIANT hmm!! It’s like a revolving door.

l/ D from 11:59 pm Friday 12 th Feb for 5 days until Wed 17 th Feb .? Today via news he dan cannot reassure that it will finish on Wed .? Last longer as the first batches of vax poison arrive via planes later in the week.. As if we cannot discern what is happening ..for those awake & alert.

PM – S.M news pictures today gleefully holding up a vial of vax dressed in blue disposable cap, gown with Aussie flag face mask and so happy they have secured the first batches. Other health ministers gloating also.. One in particular who had a picture of himself & his bookshelf with a copy of WEF – Great Reset on the shelf. Says it all.

I read the NZ situ also ..sent a friend the same as it said 1 person died from the UK variant.in I think it was Aukland …. the friend we know was originally from NZ.

Thanks Anne,
Sadly 95% of Australians don’t even know these events are orchestrated.
FEAR and LOCKDOWN creates PANIC .only solution available is the VAX. Ivermectin and other safer drugs have been publicly demonised.
My brother in law has serious cancer. His specialist is compelling him to take the VAX. I will not win the argument. Short term protection possible but within 24 months months he may well be dead from a VAX damaged immune system. Very very sad,
Phillip

Phil it is very sad re your bother in law.. short of some sort of miracle .Knowing Jesus.!

Prayer is the only answer to the many things & situations we are facing ..It is very serious.

I was hoping amongst other things it would not arrive here.. !

Phil and Anne, yes I agree that very few can see the truth behind the plan demic and vax. My brother in the US took the vax a few weeks ago and was ready to line up for his second course. Nothing I could say would change his mind…. Sheep to slaughter.

No truth in the media here about the dangers. Just “Hurry up and get your shot!”

It breaks my heart that this is being so rushed in NZ.Please join with me in prayer that God will put a spanner in the works and upset this rushed vaccination in my country of NZ.God can intevene because He loves man and is not willing that any should perish.What sickens me most is that innocent people are looking foward to this vaccine of death.when people start having serious side effects and even dieing hopfully that will wake many up and there will be a stiff resistance to taking the shot.The Christian friends I have warned against taking it had already said no way will they take it.

I agree with you Michael for God to move in NZ to expose the truth about the vaccine and stop this demonic scheme.

I’ll be praying too. I’m a border worker too, I will not be taking this shot under any circumstances. I have been showing CDC VAERS data to any of my coworkers that will listen. I have also passed that info off to our union rep but sadly I just got a shoulder shrug and a response of “the government said it’s safe.”…. Sheep to slaughter.

The news media brain washing has been very effective.