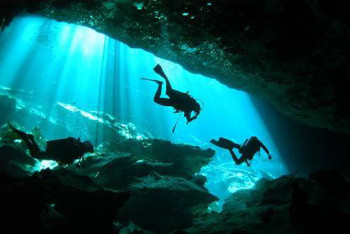 He recently shared a dream in which he was scuba diving with lots of other divers. They were all following President Obama as he led them down into deeper waters. He led them into an underwater cave. Dr. Daves felt very uncomfortable going in there, but he followed him anyway. As soon as the divers were all in the cave an earthquake caused rocks to fall at the entrance to the cave blocking their escape. It all happened so suddenly there was nothing they could do about it. They all knew they were going to die.

I shared the following interpretation with Dr. Daves, which he agreed is accurate.

The fact that they were underwater shows the condition of our country. We are underwater with $18 trillion in debt. The fact that President Obama led them deeper under water symbolizes how he has led the country into deeper debt. The national debt has doubled since he took office.

The divers following him represent investors. Obama is the front man for the shadow government, the financial elite who tell him what to do. After years of keeping interest rates at artificially low levels, near zero, the bankers have corralled the investors together in a place they have historically avoided, which is the risk assets in the stock market. In the same way that he felt uncomfortable swimming into the cave, many investors have historically felt uncomfortable with risk assets, but they have gone in anyway because the safe haven of the bond market no longer produces any income. Once they are all in there, sudden destruction comes upon them with no way of escape. Their finances are wiped out.

I have posted several of my dreams about the coming financial collapse, which all indicate a sudden disaster from which there will be no way to do anything about it after it happens. It will be too late. The only way to prepare for this event is to take the correct position before it happens. So I believe Dr. Daves dream reveals the same events that I saw coming in our economy.

Dr. Daves offers helpful resources to help prepare people financially for what is coming. Visit his website for more details.

Here is the dream. Is it possible that Obama is deep under water now because time is short, one is coming who will drain the swamp, the gig is up, exposure is coming, and Obama is forced to make a dark, critical decision to close out his agenda as President? Namely a parting shot at Israel? https://m.youtube.com/watch?v=Adi9uHRjV6A

Barack Obama sticks a dagger into the back of Israel, crafting a UN plan to deny Israelis the right to access their Temple Mount and most holy sites of their faith. The diabolically crafted Muslim, communist plan was erected as a parting shot from Obamas presidency. If you remember, I had a “dream #2” about Obama in 2008, and I believe that the dream has just unfolded and materialized. Gods voice can be heard in the heavens saying, “Get away from Him now!” I will post a video of the dream below. Here is the horrible story of the Communist UN vote to forbid Israel their sovereign right. May God empower Donald Trump to battle the UN by defunding them and send them packing as an “anti American” terror organization. http://www.breitbart.com/california/2016/12/24/defiant-chanukah-obamas-un-betrayal/

Could the earthquake in this dream be a literal earthquake? It keeps coming to mind that the stock market and dollar crash could be triggered by a natural disaster or terror attack. This would give the banksters perfect cover for their misdeeds – “Oh, the earthquake did it!”

> Judgment on Babylon (America) in Revelation 18:8 = “Therefore shall her plagues come in one day, death, and mourning, and famine.” Death and mourning could result from the earthquake, while the earthquake triggers the economic crash which leads to famine per the Black Horse. It comes in one day!

> Matt Smith’s prophetic poem: “From March until June, The spring season shall arrive, There will be many people, Found not to be alive.” Died from an earthquake? Poem continues: “During this same season, Another checkpoint will originate, Then another crushing blow, Will seal this nation’s fate. During these two seasons, The economy will decline, Look to Me My people, I say, ‘Your souls are mine.’” Checkpoint, crushing blow = market crash?

Anyone else seeing this confluence of natural disaster and market crash?

What do you know about Islamic banking? My research has shown Islamic banks weathered the last financial crisis relatively unscathed. I am a firm believer the antichrist system will arise out of islam, and if their banking system is seen as stable during turbulent waters, people will go to any apparent safe haven not realizing the cost. Have you thought about this before, and can you pray about it? I’m feeling very lead to believe this is the institutional framework that will be the mark of the beast that no one can buy or sell without taking the pledge of Islamic faith.

DO NOT WORRY SAINTS, READ THESS. 1 WE ALL BORN AGAIN BELIEVERS WILL BE CAUGHT UP
TO MEET THE LORD IN THE AIR TOGETHER WITH THE DEAD IN CHRIST, THEN WE WILL LIVE WITH HIM
FOREVER. IN MY FATHERS HOUSE THERE ARE MANY MANSIONS. JESUS WORDS.
REJOICE IN THE LORD ALWAYS AND AGAIN I SAY REJOICE
THE JOY OF THE LORD IS YOUR STRENGTH

many years ago I used to evaluate Islamic banks, there is no usury or what we call interest. I don’t recall fractual banking either so risk to debt less. however in some ways there is interest it just isn’t called interest, theyll invest in a biz or product for a steady annuity. the annuity acts like interest really. its complicated and I forget a lot