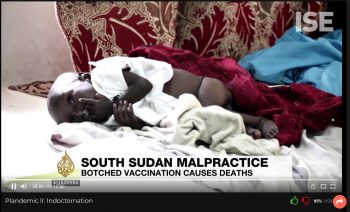 If you missed the first documentary, Plandemic, please see James’ post from May 7th with a summary of key points from this documentary here.

Plandemic II will connect the dots between all forms of media, the medical industry, politics and the financial industry to unmask the major conflicts of interests with the decision-makers that are currently managing this crisis.

I will summarize this as soon as I find time, but in the meantime, please watch this EYE-OPENING & very informative video.

Covers Event 201 (A Scripted Simulation – Oct. 2019 – 5 months prior to pandemic) – Listen to the FORESHADOWING of what we have been living

David Martin, Developer of Linguistic Genomics (1st platform to determine intent of communication) – Brought down one of the largest tax frauds (at that time) in U.S. history in early 2000. Involved in anything that blurs lines of biological & chemical weapons in 168 countries.

In 1999, there were 1 Million patents digitized by IBM. They realized that 1/3 of all patents filed in the U.S. were functional forgeries meaning that they had linguistic variations but covered the same subject matter.

In 1999, patents on coronavirus began showing up! In 2003, CDC saw the possibility for a “gold strike” following the 2003 coronavirus outbreak in Asia. They saw the coronavirus could be easily manipulated & that the virus was something that was very valuable.

Coronavirus was PATENTED in 2003 (held proprietary rights to the disease, the virus, and to its detection & all of the measurement of it). Fauci, CDC, Dr. Ralph Baric (professor of microbiology & immunology at University of North Carolina – Chapel Hill) & others all had 100% control of the cash flow (2003-2018) that built the empire around the industrial complex of coronavirus.

Either SARS coronavirus was manufactured making the patent legal or if it was from nature, it has been illegally patented. If it was manufactured, it was a violation of biological & chemical weapon treaties & laws.

History of the coronavirus

Discusses the biases in the “independent fact checkers”

President Ronald Reagan signing legislation protecting vaccine manufacturers from legal claims for harm done to humans by their vaccines. When a claim is paid through the Vaccine Injury Court, the taxpayers pay the settlement.

Discusses who Bill Gates really is (his background, the antitrust case against Microsoft in the late 1980’s, his actions as CEO of Microsoft, his donations to the WHO & GAVI, etc.).

Discusses the deaths of girls and paralysis and serious problems for multiple girls vaccinated with the HPV vaccine in India. A scathing report on the Bill & a Melinda Gates Foundation & the Foundation being thrown out of India before being allowed to return due to political influence gained by India’s leaders through a relationship with Bill & Melinda Gates.

Discusses how the Bill & Melinda Gates Foundation has paralyzed 490,000 children in India from 2000-2017 with their oral polio vaccine yet no action has been taken against them.

Damage done to children in Africa through vaccinations causing paralysis and partial paralysis.

Plans dating back to Henry Kissinger’s role in reducing population growth to zero in Africa to control Africa’s plentiful resources.

There is so much to see & learn in this documentary. If you do not have the time, make the time. Information of critical importance is shared. Also remember you can change the speed to 1.5 to shorten the time needed.

Please share this far & wide. People need to understand how we are & have been deceived through the very organization’s and governments that purport to protect us.

Expat Gal A BIG Thank you for sharing the information in this Post. It is TRULY SHOCKING that these children have suffered to this extent- HEART BREAKING !and their Govt allows such atrocities. it is shameful

Just one Que?. was the second video link- https://ise.media/video/plandemic-ii-indoctrination-.23html
meant to come up in the aqua blue coloured print to click on.. that is what i noticed.

I do know of another good Christian Group who have an Orphanage that they are supporting during the time of Covid crisis with Food and support for basics- It is called “‘Answer The Call”‘ .. Started by a lady named Leah- cannot remember her surname.( would have to look that up) A fellow christian believer in USA sent me their link via email a while ago .

Sorry Anne. I sometimes don’t embed the link to make it a hyperlink. I fixed it in the article above so just click on the blue hyperlink for “Plandemic II: Indoctornation”. Thanks for catching that.

Yes. It is shocking. I am currently dealing with new information of how the HPV vaccine screws up the immune system permanently & can cause death. This is hitting very close to home with someone I love & the anger, disgust, disappointment, sadness, etc. is intense. What I have basically learned is that this horrible “vaccine” is actually a biologic and is actually damaging the recipient’s immune system & setting them up for a lifetime of medical issues including insomnia leading to dementia, seizures, sepsis, etc. These people creating these damaging “vaccines” that pediatricians are led to push on parents & children are a level of evil that I can not wrap my mind around. ?. It is truly shocking to realize there are people in this world actively harming our children in all aspects – physically, mentally & emotionally.

Dear Expat Girl,
I provided a summary of the video and link to the video. Face – book refused to publish the post on a private group saying it was face checked as false.
Says a lot.
Face book clearly wish to protect Gates as much as possible and promote global vaccination.
I even removed the comment about the 490,000 children,
God bless,
Philip

Hi Philip – Yes! The same thing happened with me with the recent video by Dr. Carrie Madej. Stated it was partially false. All of this confirms Caroline Diadem’s (Watchwoman) first remark on a video about a week ago stating that censoring would increase & it went up yet another notch. I often take a picture of the Youtube video, title & Channel, circle these & then post it so AI has no idea what is in my post. I have been doing it now for about 9 months. ?

I am thankful we do not have issues with censoring here yet. Really tough times to “get the word out”, especially with greatly reduced social interactions.

I am praying for all the Aussie & Kiwis in our community. ?. I definitely feel that Satan is eager to kick things off as soon as God lifts His hand of protection. High watch dates 9/22-9/23. Going to do a post on this as predictive programming has shown these dates for years.

Hoping to do a much more in-depth summary later tonight on this. & post it. Watched it the first time through without taking notes & there were so many “jaw-dropping” details shared. Our systems and government agencies have become so corrupted & we, the people, pay the price!

Pretty exciting to be a week away from the start of spring. Hope your winter has not been too harsh.

Appreciate your significant efforts Expat Girl. At least our family are aware. We have extra food in our garage and about 30 kg of rice . Many Christians have no idea what is coming. They are unprepared ,
God bless and watch your back. I fully imagine someone is watching you and James bailey,
May God’s best angels protect you both
Phil

Phil -Sydney another face book blockage: = I just remember keeping this link open on my computer as I was looking @ stuff when Expat gal put up post on hydroxychloroquine.

it is an all out War between what is Good & what is Evil – we are all in a Big end time battle! but our Hope is in Father God! & Jesus.his son.

Just weighing in on this article: It was on 60 mins Sunday night; I felt sick when I saw it. !!

The candidate that comes out of the UK is now being tested by the British in Brazil & in South Africa – he told
reporter Tara Brown -60 mins.

He was all smiles ( cheesey) in the TV interview..also interesting was his answer re his relationship with D. Trump… he smiled & said a few things but said his relationship was complex with the President as he termed it.( from memory). The pictures & the body language say a lot I think.

Dear Anne,
The intellectual capability of Dr fauci has to be seriously questioned. As confirmed by professor tritto (Italy) on lifesitenews covid 19 has at least 10 strains potentially more , and these strains tend to have geographic zones.
The point is a vaccination tested in Brazil or South Africa may not terribly effective against a different strain of the virus that is now prevalent in Australia.
Really disturbing. We have highly powerful people setting health agenda with little common sense,
God bless
Philip

Yes Phil good points; re Professor Tritto – Italy. boy! he really said it like it is.. I recall his speech -talk in the Italian Parliament.

Comment @ end of the 60 mins report where Fauci states he is a scientist,physician, health official, is to protect the US & entire world because we live in a global community.. that says it all also..

What a fake Fauci is. He has been a key player in this entire situation, stands to make millions if not billions off the vaccine that he has a huge financial stake in & he knows, that this type of “vaccine” has never been developed & proven effective in doing anything since 2014! Also magically, a typical 15 year process can be done in under a year due to “technological advance,ents” ?? & he’s stating “no corners were cut”? What a world class liar & charletan! This article/interview made my blood boil….What an evil & duplicitous man….He really must think we are all complete idiots that will trust him based on his credentials. He needs to be put in prison like the doctors were from the Holocaust following the Nuremberg Trials.

Yes, he’s been well trained for his Jesuit mission.

Have listened to Dr Tenpenny previously – she is really great to listen to, thank you for reminding and sharing this link. A friend in USA had sent me one of her videos ages ago but good to know of this particular one.Another good one I have listened to is Dr Lorraine Day also she has quiet a few good videos articles.

Listening to this : Christian Evangelicals signing document saying it is okay to take Vaccine
Beware!