You are here: Home » News » Jesuit Controlled Organizations » DHS » DHS Insider: “Watch the TSA and Their Increasing Involvement Against the American Public”
Share this post: 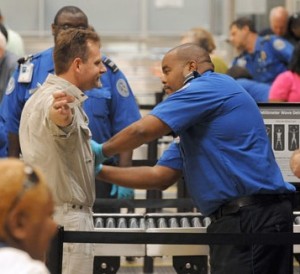 An insider at the Department of Homeland Security has just given a serious warning that the Transportation Safety Administration (TSA) is now being prepared to be used against the American people.

HOW THE TSA BECAME A BEAST

A couple of months after 9/11, the TSA was signed into law by President George W. Bush. Like just about every other form of government, the TSA quickly grew into a beast. Initially, it was part of the Department of Transportation and provided airport security screeners who had very limited authority. Their uniforms reflected that, wearing plain white shirts and black pants. Within 18 months, TSA was moved to the new Department of Homeland Security where the airport security screeners were given new titles, Transportation Security Officers, which sounds a lot more authoritative. In 2008, their uniforms were changed to resemble local law enforcement, even wearing badges. In 2010, TSA added X-ray body scanners, which allow TSA officers to see what we look like naked. Can you see the trend here?

Today, the TSA employs 47,000 Transporation Security Officers working at entry and exit points in airports. However, that number is about to increase because TSA is now expanding to our nation’s highways. In October 2012, TSA agents began random inspections of vehicles on Tennessee highways.

Unfortunately, the TSA’s hiring practices have not kept pace with their expanded functions. Virtually anyone can get hired as a TSA agent. There is no law enforcement training required. TSA recruits their elite group of officers by placing hiring notices on pizza boxes and at discount gas stations. Do you feel safer now?

THEY ARE THE STOOGES TO CARRY OUT THE PLANS

An interview with a high-level DHS insider, alias name “Rosebud,” provided shocking new revelations about upcoming plans for the TSA. The interview was conducted in December 2012 by Douglas Hagmann, founder of the Northeast Intelligence Network.

Rosebud has exposed a scheme by the Obama administration to collapse the United States dollar in order to collapse the economy in order to fundamentally transform America. He warns that the TSA will play a huge role in the coming chaos as they will be the ones who will carry out certain parts of the plan after the dollar collapses and the gun confiscation begins.

By the way, there has been a lot of communication recently between Napolitano and Pistole [TSA head]. They are planning to use TSA agents in tandem with local police for certain operations that are being planned right now. This is so [deleted] important that you cannot even begin to imagine. If you get nothing else out of this, please, please make sure you tell people to watch the TSA and their increasing involvement against the American public. They are the stooges who will be the ones to carry out certain plans when the dollar collapses and the gun confiscation begins.

Okay, but I’m not going to give it to you in baby steps. Big boy steps. This is what I am hearing. Life for the average American is going to change significantly, and not the change people expect. First, DHS is preparing to work with police departments and the TSA to respond to civil uprisings that will happen when there is a financial panic. And there will be one, maybe as early as this spring, when the dollar won’t get you a gumball. I’m not sure what the catalyst will be, but I’ve heard rumblings about a derivatives crisis as well as an oil embargo. I don’t know, that’s not my department. But something is going to happen to collapse the dollar, which has been in the works since the 1990′s. Now if it does not happen as soon as this, it’s because there are people, real patriots, who are working to prevent this, so it’s a fluid dynamic. But that doesn’t change the preparations.

Anyway, I am hearing that the plan from on high is to let the chaos play out for a while, making ordinary citizens beg for troops to be deployed to restore order. But it’s all organized to make them appear as good guys. That’s when the real head knocking will take place. We’re talking travel restrictions, which should not be a problem because gas will be rationed or unavailable. The TSA will be in charge of travel, or at least be a big part of it. They will be commissioned, upgraded from their current status.

While this sounds like another conspiracy theory, it is unique because the source, Rosebud, has access to top-level officials and classified documents within the Department of Homeland Security. Also, the interview was conducted by a reliable source with a proven track record. Beyond that, what further convinced me that this warning is for real is that it is consistent with prophetic revelations God has recently given to some of his people. Specifically, a dream given to Pastor TD Hale describes events very similar to the ones described by Rosebud with federal government agents arresting American citizens and hauling them off to detention centers. If you have not yet read TD Hale’s dream, I recommend you do so now by clicking the link.