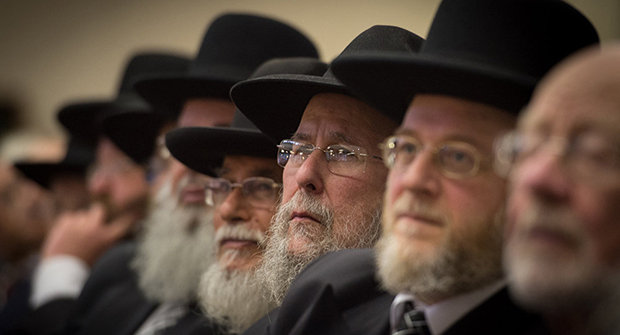 In a dream last night, I walked up to the doors of a Jewish synagogue. Outside the doors were people on their knees praying and some were face down. I went inside and saw a woman at a desk. She required me to take a glass cup of something she said was water and refill it. I looked in the cup and it was some kind of murky liquid. I was sent out of the worship area to go “refill the cup”.

As I looked at the contents of the glass, I knew it was poison and anyone who drank it would be poisoned, so I threw it out, both the contents and the glass, and picked up a beautiful glass such as I had never seen before and filled it with clean clear water. Then I took that glass back to the woman at the desk. She went into a rage and suddenly changed from being a woman to being a hideous demon straight from hell. She was screaming and trying to rip me apart.

The people inside the worship area seemed to be in some kind of trance because they did not react or respond to what this demon was doing. I began commanding the demon to come out of this Jewish synagogue by the name and authority of Yeshua the Messiah. Now, the demon was on the floor, on her/its back, withering and screaming and pushing itself towards the door. This thing did not want to leave. I commanded it again in and by the name of Yeshua the Messiah to leave, but it still screeched and struggled against the authority of Yeshua, yet it was still moving towards the door.

When the Rabbi saw the power of God demonstrated in the name of Yeshua and the demonic manifesting in his House of God, he immediately joined me in casting out this demon. When he recognized Yeshua as Messiah, the demon was immediately gone.

The Rabbi then looked up at all the people in his congregation and said, “Yeshua is Messiah.”

As soon as he spoke those words, the people immediately became awake and aware, no longer in what seemed to be a trance. Then I woke up.

This dream amazed me. I prayed this morning that every synagogue would come under the authority of Yeshua the Messiah.

I believe the people outside the doors of the synagogue were aware that something was not right in their place of worship, so they did not go in, but stayed outside and prayed. The people inside had been “blinded” by the demonic, symbolized by the poison they were drinking. The demon initially appeared very sweet and kind, but then attacked every person who came in the doors.

The beautiful glass with the clear clean water that I brought back symbolized the River of Life that proceeds from the Throne Room of God, delivered to us by His Son Yeshua. This enraged the demon because this water washes away sin and spiritual blindness.

Although I commanded this demon out of the synagogue, it wasn’t enough because these people had to want the demon to leave. When the Rabbi saw the power of God over this demon and realized whose name it was that had this power and authority to cast out demons; he publicly recognized Yeshua as Messiah. Then the Rabbi understood his position as a shepherd over his flock and joined me in commanding this demon of spiritual blindness out. Once the Rabbi had this revelation and the demon was gone, the people were set free to see Yeshua as Messiah and worship Him in spirit and in truth.

This was a very powerful dream to me because it tells me that the awakening of the Jewish people to their Holy Messiah is coming through the doors of the Traditional, Reformed and Hasidic Jewish Synagogues across the world. They will experience this awakening together in groups and their Rabbis will lead them to the truth of Yeshua the Messiah. The demonic that has blinded them for over 2000 years will be swept away by the power of God through His Son Yeshua.

I believe this will begin very soon now. There are already Messianic Synagogues across the world, a mix of Gentiles and Jews who recognize Yeshua as Messiah, but this dream revealed the coming move of God will be on those who have not yet recognized Yeshua as Messiah and have been waiting for the arrival of their Messiah.

Pray for these who are still waiting, who have been blinded by the demonic and do not understand that their Messiah Yeshua has come and is coming again.

We must understand that salvation through Yeshua the Messiah came for the Jew first. We gentiles were later grafted in by the grace of God. For truly it is the will of God that none should be lost. Now we are as one, the Jew as the tree that the Gentile was grafted into; making something whole and complete with salvation through Yeshua the Messiah available to those who will seek Him.

This news grabbed my attention because I have a friend in South Korea who is part of a congregation that recently sent 32 Christian warriors (part of the Ahavat Israel in Taiwan) to Israel. Their mission is to reach 5,000 Jewish people and persuade them to call for their Mashiach as Christians are calling for the return of Jesus. I’m am trying to learn more from her about this. If anyone has any biblical insight, please do share!

May all the Jews say: Blessed in He who comes in the name of the Lord ! Thanks for sharing

Awesome! Yeshua is HaMashiach (the Anointed One)! The King of the universe; the King over heaven and earth! His Name is above every name, every situation, every stronghold, every disease; all power in heaven and earth has been given to Him.

Amazing dream & message…Praise Yah!..yes for us Christian believers being grafted into the wild Olive Branch; The Name & the power of the shed blood of Messiah is so powerful …Name above all names ..King above of all kings.
He is worthy of our praise.. How Great is Our God..!

Many Jewish people ..are waiting for Their Messiah ( Mashiach)..to come..most of them (majority) did not believe in his Birth, Death & Resurrection..the first time around they rejected him..!

So they ; The Jews ! say’ he is coming’ ..( they r waiting for him to appear and fulfill prophecy..as they call it..Christian believers say Yahshua Messiah Jesus/Christ’ is coming again’.. the second coming ) In the Hebrew Alphabet I believe there is no letter J..as we know it in the English alphabet..only Y …..

But so important they do not give their allegiance to the Anti /Christ…because he set’s himself up in the temple of God saying he is God. …we have to be so careful as I believe the A/C will be very seductive …looking like the real deal.
He would deceive the very elect if it were possible..

Anne: The “J” is found in Latin and Greek, while there is no letter “J” in Hebrew, the sound was pronounced as a “Y”. So we should then see these Biblical names pronounce differently as well, Joseph, Justinian etc., however the majority of gentiles have learned to pronounce these with the Latin or Greek sound. All that to say this, Yeshua hears His name in many languages pronounced many different ways and He accepts them all 🙂

What a Wonderful, blessed dream/vision!!! Thank you so very much for sharing! May it be so, LORD Jesus!!

Amen, Kasey! Let it be so! What a wonderful, inspiring dream! Praise God!!