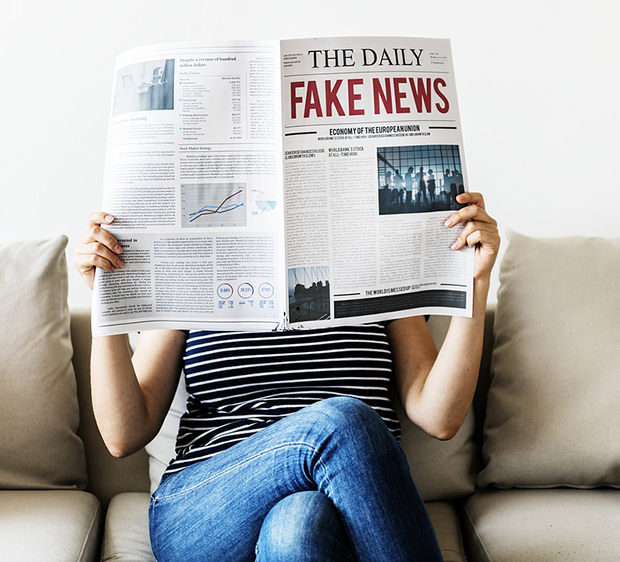 The United States Defense Department has launched a new project to fight “large-scale, automated disinformation attacks.” The project will rely on software managed by the Defense Advanced Research Projects Agency (DARPA), which will be able to quickly scan through more than a half million news stories from a variety of sources, including social media posts, to identify anything they consider false. (Source: bloomberg.com)

Do we really need our Defense Department devoting their resources to fighting fake news? The justification for this new project is to protect our national security, which was the same justification used to launch the global war on terror, which has proven to be exactly the opposite as the coalition forces, led by the United States, have terrorized and killed many innocent civilians all around the world, mostly through drone strikes, while also arresting, indefinitely detaining, torturing and often killing anyone identified as a suspect, giving them no rights whatsoever. Despite changes in presidential administrations, the drone strikes have not only continued, but even increased significantly under President Trump.

This new DARPA project is more evidence that the shadow figures at the highest level of our government are concerned about the kind of information distributed to the American public, but they’ve given us plenty of reasons to question the reason for their concern. If they were truly concerned about eliminating fake news, then why did CIA Director William Casey make this statement during a Cabinet meeting in February 1981 in the Roosevelt Room in the West Wing of the White House:

“We’ll know our disinformation program is complete when everything the American public believes is false.”

His comments were immediately transcribed by Barbara Honegger who was in that meeting, serving as Assistant to the Chief Domestic Policy Adviser to the President. Shortly after the meeting, she shared his statement with Senior White House correspondent Sarah McClendon, who was her close friend and colleague, who in turn made it public. (Source: quora.com)

Casey’s comment gives us a startling insight into the true goals of our federal government, which is not to find and eliminate fake news stories, but to manufacture and distribute them, saturating our minds with so many lies, we become thoroughly deceived about everything. His comment is just one small piece of evidence among many others revealing the true purpose for the new DARPA project is to find and eliminate true news. It’s not about our security, but theirs. His comments were directed to his boss, President Ronald Reagan, the man championed by conservatives as a national hero and true patriot, which was also my view of him for decades until I took the red pill, the righteousness pill, causing the scales to be removed from my eyes.

The CIA’s manipulation of the news media has been well documented, dating back to their founding in 1947. And it’s not limited to the news, but includes all media outlets, including movies, television programs, newspapers, magazines, and more recently, social media posts. I documented these facts in Part 2 of my book, Remnant, because it’s a sign of the times, directly fulfilling the number one warning that Jesus gave to the generation that would see His return, warning about the great deception coming. (Matthew 24)

Hopefully, DARPA’s slick new software program will be smart enough to find this post, but I don’t think they’ll like it very much.

The U.S. continues to more closely resemble Nazi Germany with each passing day. 😥. Within a year, it may be unrecognizable. I continue to be shocked by the removal of rights of citizens & residents, the anger/hate that exists and is actively being fostered by the media, the outright murder of babies (including those born alive) and called “abortion”, etc. I was shown the nation would fall but I could never fathom how quickly this would happen. I truly grieve for what the U.S. once was. 😥

So when are they shutting down CNN and MSNBC

It’s not just the ones on the left.

Trump Unleashes the MILITARY for fake news?!?!?! Yeah ,he is only going after News that is bad for HIM and his re-election, If Trump wants rid of a News article then I TRULY believe whatever is in it is true. He is talking away freedom of Speech and The “ Evangelicals Christians “ just Cheer him on, when Obama was trying to do this the screamed from their roof tops. Trump does not want any REAL TRUE news getting out about him…. and watch anyone That is a Christian and exposes him and his Deception you better believe DONALD TRUMP will come after them. I am sure any article on Z3news or YouTube or anything that even seems to make Trump look bad they will take down. How people can still be deceived by Trump is just beyond me but I pray people wake up quickly, because if he does win the next election against then he will slowly turn against the Prosperity Gospel preachers also, because Trump is in the White House for HIMSELF it because he Loves the Poor people of America better but for him, Yes God is causing him to do some things that are filling Prophecy but this man Owes so many people money and he basically had no choice but to become President to HELP THEM the bankers etc.. Persecution on the BRIDE/ Remnant has begun, but The Prosperity Gospel/ Lukewarm Christians won’t even care or notice so It will be hard for anyone to really find out this will be happening. Slowly one by one Sites will start to just disappear and YouTubes will be shut down without warning, Remember when Obama Signed the Internet over to the U.N? He did it like a few weeks before he left office, well why has… Read more »

The more I hear and the more I see, I am covinced that taking shelter in God is the only path now. Both sides lie, imho, there is no politician that will represent We the People. Civil War, WW3 or some other type of cpnflagration will be seen on US soil within tje next 10 years or so…

Personally, I would like to see people prosecuted for slandering others; whether they are in politics or not. I want the news we read to have to go through a “back ground” check, all the sources double and triple checked for the TRUTH. I am so sick of lies, lies, lies. Is it the Department of Defense that should be spearheading that? probably not. That said, there should be a LAW in every State that demands what is reported is factual and truthful, not here say, not rumor and definitely not lies. Any reporter, news person, be it paper, computer, radio or TV news would be fined heavily on the first offense and lose their jobs in the field permanently on the second offense….period. We have become so accustomed to accepting whatever we are being fed it is sickening. Somewhere, someone has to draw the line in this world where no one wants absolutes. Our Moral compass is so warped, the majority of the world population has no idea what is right or wrong any longer.

Yes, they’re always looking out for our best interest, aren’t they. Here’s how they’re looking for narcotics suspects (uh huh):
https://www.thecentersquare.com/illinois/illinois-state-police-unaware-of-surveillance-balloons-reportedly-coming-down/article_d240e4ba-c2a9-11e9-a920-4f3d80eec8a9.html?utm_medium=social&utm_source=facebook&utm_campaign=user-share&fbclid=IwAR0V4cSjvSnmVt7ykutt3SU36pXlFDI-zxokRRcaP9Y6R-kOG8SWn1aF4t4
I had no idea that drone strikes have increased under Trump. Thanks for posting this, James, opening our eyes to more of what’s truly going on in this world. It only makes me want to draw closer to my Lord and Savior.

Amen. ’bout time someone alerted us about this.