As noted by CBS reporter Jan Crawford during a Face the Nation roundtable discussion1 December 26, 2021, children have — by far — the lowest risk for serious COVID-19 infection and, in her view, COVID policies have therefore had an outsized impact on children and teens.

“Even teenagers, you know, a healthy teenager, has a one in a million chance of getting and dying from COVID, which is way lower than … dying in a car wreck on a road trip. But they have suffered and sacrificed the most,” Crawford said.

“And now we have the Surgeon General saying there’s a mental health crisis among our kids. The risk of suicide attempts among girls [is] now up 51% this year, [and] Black kids [are] nearly twice as likely as white kids to die by suicide.

School closures, lockdowns, cancellation of sports. You couldn’t even go on a playground in the D.C. area without cops … shooing the kids off. [It has had a] tremendous negative impact on kids, and it’s been an afterthought.

You know, it’s hurt their dreams, their future learning … risk of abuse, their mental health … [If] our policies don’t reflect a more measured and reasonable approach for our children, they will be paying for our generation’s decisions [for] the rest of their lives. And that, to me, is the greatest underreported story of the past year.”

Many Students Report Feeling Out of Control

In related news, The New York Times on Christmas Eve published an article2 by Erica Green, reviewing the impact extended school shutdowns have had on students.

“Teenagers arguably bore the social and emotional brunt of school disruptions,” she writes, noting that across the U.S., high school-aged teens have over the past two years reported “some of the most alarming mental health declines, evidenced by depression and suicide attempts.”

According to Green, “large numbers” of high school students have missed “most or all of the 2020-2021 academic year,” and as a result, failed classes that are “critical to their futures.”

Harrison Bailey, Ph.D., principal of Liberty High School in Bethlehem, Pennsylvania, described the general sentiment among students as “resignation and indignation,” with “blunt and flagrant disrespect” being “rampant.”

Bailey has had to intervene in an unusually large number of fist fights and hall brawls as students resumed classes in person. The school’s wellness center has also been “overwhelmed” with students reporting anxiety and depression. Green writes:

“By December, referrals for the school’s Student Assistance Program — in which teams of counselors and administrators coordinate resources for troubled students — had reached 300, compared with a total of 500 for the entire 2019-20 school year.

The Other Side of Rage and Despair: Apathy

Aside from violence, Bailey is seeing another, in many respects even more concerning trend: apathy. Many are coming to school wearing their pajamas. Overall, virtual learning has proven to be nothing short of a disaster. A total failure. What the experiment has taught us is that school is not just a place where you learn a bunch of information. It’s a place where you learn socialization skills.

The No. 1 complaint has been anxiety: ‘Anxiety about being in the classroom, being in front of people, speaking to people, anyone looking at them.’ ~ Nancy Ettwein

Many are now years behind in this regard, as COVID restrictions and masks have prevented interpersonal engagement and dialogue. “People don’t know how to communicate anymore,” 18-year-old Jazlyn Korpics told Green. “Everybody’s a robot now — their minds are warped.”

Nancy Ettwein, who ran the school’s wellness center until November 2021, told Green the No. 1 complaint has been anxiety: “Anxiety about being in the classroom, being in front of people, speaking to people, anyone looking at them.” Many of the student referrals for mental health say the student is just “sitting and crying in the bathroom.”

This abnormal response to normal social encounters is undoubtedly the result of extended isolation and lack of face-to-face interactions with other humans. Sixteen-year-old Kaisyn Carswell described pandemic life as “emptiness, but the emptiness is really heavy.” Another student reported spending the entire year of 2020 playing video games all day long.

Many Faculty Are at Wits End

“Survey results4 released this month by the National Association of Secondary School Principals raised alarms that the pipeline of principals might be another casualty of the pandemic, as their roles grow more amorphous and untenable.

In responses to the survey, which included a nationally representative sample of leaders, only 35 percent said they ‘strongly agree’ with being generally satisfied in their jobs, down from 63 percent in 2019.

With despair and lack of purpose and direction comes increased drug use, with recent statistics showing a shocking spike in fentanyl overdose deaths among high school-aged adolescents in the U.S. during 2020 and 2021.

The following graph, from a December 24, 2021, preprint article5 posted on medRxiv and tweeted6 out by Dr. John B., a scientist, illustrates the situation better than words. 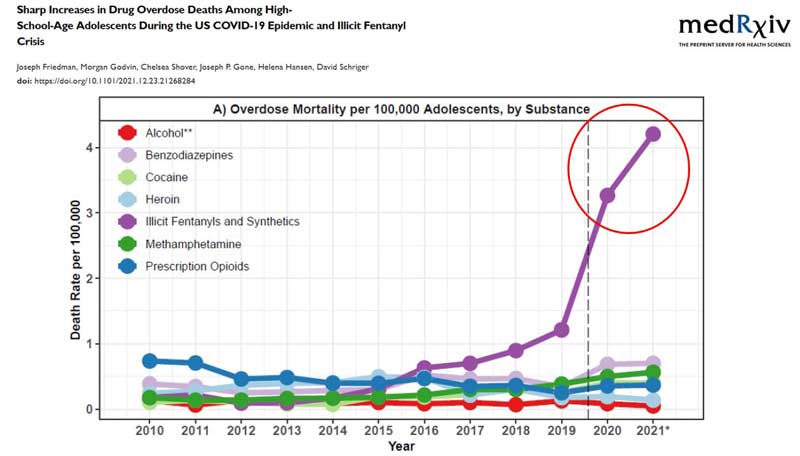 According to the authors:7

Trends were driven by fatalities involving IMFs [illicitly-manufactured-fentanyls], which nearly tripled from 2019 to 2020, and represented 76.6% of adolescent overdose deaths in 2021 …

Our results should also be understood in the context of rising rates of adolescent mental illness during the COVID-19 pandemic. These findings highlight the urgent need for accurate, harm-reduction-oriented education for early adolescents about the risks of an evolving drug supply, as well as greater access to naloxone and services that check drugs for the presence of IMFs.”

Teens are also being assaulted by health problems brought on by the COVID jabs, which may over time make the mental health decline even worse than it currently is, especially among boys. According to a report by Steve Kirsch, who’s been following and investigating COVID shot side effects, one private school in California is seeing a dramatic rise in myocarditis among boys — a condition that can have lifelong consequences, severely reducing one’s quality of life. He writes:8

“For a long time, I’ve been on the record as saying that the rate of myocarditis is around 1 in 317 for teenage boys. That was a conservative estimate since it used a VAERS under-reporting factor of 41, which is reserved for only the most serious events … a more ‘realistic’ estimate is 1 in 150.

Today I heard from a parent of a child who attends Monte Vista Christian school that three children were diagnosed with myocarditis after they got the vaccine. The school has 855 kids … Let’s do a little math.

The ratio of male to female rates of myocarditis is roughly 10:1, so it’s a good bet these were all boys. Roughly half the school are boys. There has never been a vaccine mandate at the school. So I’d estimate conservatively that 2/3 of the kids could have been vaccinated by then. So, 855/2×2/3=285 vaccinated boys.

So the rate of myocarditis at the school by my estimate is 3/285 which is 1 in 95 boys. This makes sense to me overall; it is not far from my 1 in 150 estimate. One in 95 boys with myocarditis (which is never ‘mild’) should cause an immediate halt to the vaccines and an examination of how the CDC could possibly miss a safety signal this large.”

The U.S. Centers for Disease Control and Prevention is also monitoring eight cases of myocarditis in 5- to 11-year-olds who got the Pfizer COVID jab.9 Adding insult to injury, it’s now clear the shots are not providing the protection promised.

According to Cornell University, of the 903 cases of Omicron infection reported during the week of December 7 through 13, 2021, which shut down the Ithaca, New York campus, almost all were in fully jabbed students.10 Some had received three shots.

Sacrifice the Young to ‘Protect’ the Old?

As noted by Robert F. Kennedy Jr., never before has a society demanded that children take risks that might sacrifice their health in order to protect the old.11 It’s immoral and irrational.

Writing in The Defender,12 Dr. Robert Malone highlighted the second Physicians Declaration13 by the International Alliance of Physicians and Medical Scientists, dated October 29, 2021, which has been signed by more than 16,000 doctors and scientists, stating that “healthy children shall not be subjected to forced vaccination” as their clinical risk from SARS-CoV-2 infection is negligible and long term safety of the shots cannot be determined prior to such policies being enacted.

Not only are children at high risk for severe adverse events, but having healthy, unvaccinated children in the population is crucial to achieving herd immunity. The declaration also demands that health agencies and institutions “cease interfering with physicians treating individual patients.”

“Before you inject your child — a decision that is irreversible — I wanted to let you know the scientific facts about this genetic vaccine, which is based on the mRNA vaccine technology I created.

There are three issues parents need to understand: The first is that a viral gene will be injected into your children’s cells. This gene forces your child’s body to make toxic spike proteins. These proteins often cause permanent damage in children’s critical organs, including:

The most alarming point about this is that once these damages have occurred, they are irreparable:

The second thing you need to know about is the fact that this novel technology has not been adequately tested. We need at least 5 years of testing/research before we can really understand the risks. Harms and risks from new medicines often become revealed many years later.

Ask yourself if you want your own child to be part of the most radical medical experiment in human history. One final point: the reason they’re giving you to vaccinate your child is a lie.

Your children represent no danger to their parents or grandparents. It’s actually the opposite. Their immunity, after getting COVID, is critical to save your family if not the world from this disease.

In summary: There is no benefit for your children or your family to be vaccinating your children against the small risks of the virus, given the known health risks of the vaccine that as a parent, you and your children may have to live with for the rest of their lives. The risk/benefit analysis isn’t even close. As a parent and grandparent, my recommendation to you is to resist and fight to protect your children.”

Without doubt, we have loads of work ahead of us. In all likelihood, it will take years to undo the harm these past two years have inflicted on our children, both physically and psychologically. But as a first step, we must resolve to protect children from lifelong health problems caused by these experimental jabs.

If we allow tens of thousands of children, perhaps even millions, to be permanently injured, resulting in lifelong disabilities and ill health, the psychological devastation will be unimaginable.