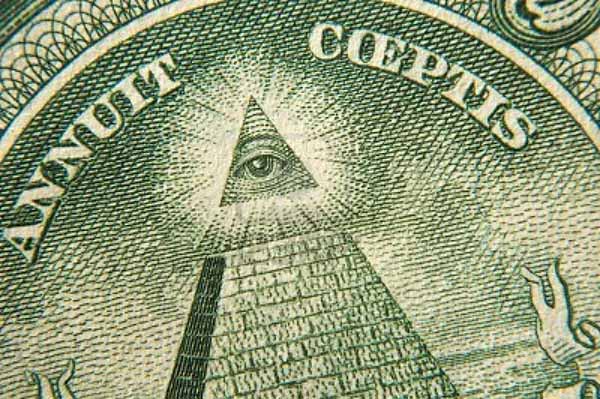 Recently, I was praying in the middle of the night and I had a vision. I saw a giant eye surrounded by brown/bronze colored straw-like things. It was hovering over the stairs in front of the White House and was looking everywhere around quickly. It seemed to be very nervous.

In front of the eye, I saw two black cannons, very old ones like the ones used in the seventeenth or eighteenth century. The cannons were both aimed directly at the eye. It was a quick vision and it disappeared right after that.

I believe this vision reveals what is going on right now in the United States. What I understood is that the eye represents the corrupted elite in Washington DC. They are very nervous right now because they are not hidden inside the house anymore, they are uncovered. They do not know what the new President and his Vice-President (love the fact that there are two cannons, not only one) are going to do. I felt their anxiety as I was watching the eye as it looked nervously around.

The whole vision felt like a judgment on those corrupted people in Washington.

Etienne-Pascal Nadeau is a believer from Quebec City, Canada. He is a music teacher at an elementary school and is actively involved in worship ministry. He started his walk with the Lord in 2007 and started receiving prophetic visions and dreams soon afterwards.

I noticed in Hillary’s speech yesterday, 12/8, she was again wearing purple, just as she and her husband did when giving her speech after losing the election. I can’t help but think she is trying to say something to the elites by wearing this color, that it has some creepy meaning.

Purple is the colour of royalty.

Hi Z3er’s. This is a must listen to video. You don’t have to watch it. Just turn it on and listen to it. Is America in a big mess headed for discipline? You bet. Get ready remnant Church, very soon, we are about to stand up.
https://www.youtube.com/watch?v=2Z4u2494vHI

Notice this Bible passage talking about the Antichrist Messiah and the right eye the symbol of secret societies which will be darkened and the arm representing strength will be withered. In the end the AC will be nothing.

American Standard Version
Woe to the worthless shepherd that leaveth the flock! the sword shall be upon his arm, and upon his right eye: his arm shall be clean dried up, and his right eye shall be utterly darkened.

Everything is going according to the Jacob Rothschild plan. Death and
destruction is his game to cement his control over 100% of the world. He is
very close to that % now. His god is lucifer and indeed that is why the world
is full of death and destruction.

Peggy A.
Reply to  Rev. James B. Medd

Rev. James B. Medd,
I don’t know you, but I’m quite sure this is your warning dream, so I couldn’t resist posting it here under your name!

“Wake Up! Jesus is Coming” through REVEREND MARY (with strong reminder about being in THE WORD DAILY)

Speaking of “Reverend Mary’s” reminder above about being in THE WORD DAILY, here’s a confirmation post. It is titled “Do You Read the Posts on God’s Blog?” (11/11/2015).

The elites seem to be nervous about losing control. If so that makes the next six weeks very dangerous for the world considering NATO has moved men and equipment into the Baltic states, the Ukraine has fired missiles into the Crimea and Congress is in the process of declaring a no-fly zone over Syria where the Russians have their anti-aircraft missiles set up and their aircraft carrier parked off shore. On top of this the Russians were not to happy to find out that the Turks have been buying ISIS crude, refining it and selling it on the open market. Turkey is part of NATO and the US probably knew all about this since they created ISIS with the help of the Saudis and Israel. Turkey has it’s eye on Iraq and Iran to become part of a new Caliphate. Mix Israel into the stew who would like to attack Iran before Trump gets into office and ruins their plans. Plus we have Obama who would like to be the author of a ME peace settlement for his now empty legacy. Buckle your seat belts we’re in the year of Jubilee, 5777.

Thank you for posting this Etienne. Here’s the elites fear as stated by Zbigniew Brzezinski (MSNBC’s Mika Brzezinski’s father) https://www.youtube.com/watch?v=7wjdVePwPh4 4:20 mark for the “Easier to Kill a million people than control a million people”. Aaron Dikes summary is prior to that. They are scared of the awakened masses… what are they going to do now? Populism / Nationalism is sweeping the globe. They can not have that. They are more dangerous now than ever.

Matt, thanks for posting this. This makes it plain to see for all that we are dealing with evil personified in the elites of the world. Brzezinski is an avowed, unashamed communist along with Kissinger, the Rockefellers and Bushes. The fact that NBC has Brzezinski’s daughter as an anchor speaks volumes.

Brzezinski is also the co-founder of the Trilateral commission with David Rockefeller. “Brzezinski, who was born in Poland, in fact acted as the lead political advisor on foreign affairs to President Obama during his 2008 campaign and is still unofficially advising him on foreign policy today [2012 article].” The Dark Lord of the Sith is advising the Antichrist in the WH.

Very interesting Etienne! I had a brief dream a few weeks ago in which I saw a dollar face down in the floor of a vehicle. What really stood out to me was the pyramid and eye on the face down dollar knowing that it is occultic imagery. I wondered if the dream meant there would be a contrived collapse of the dollar by those in power..??

Peggy A.
Reply to  Michael Perritte

Thank you! As for the collapse of the dollar, go see the testimony/prophecy of Maurice Sklar on Youtube. It is very encouraging and he talks about that collapse.

I like your dream and your interpretation. God bless