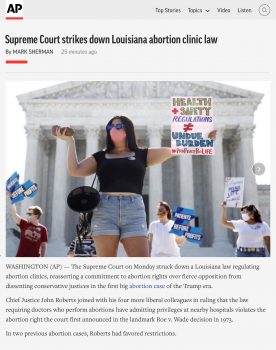 “Chief Justice John Roberts joined with his four more liberal colleagues in ruling that the law requiring doctors who perform abortions have admitting privileges at nearby hospitals violates the abortion right the court first announced in the landmark Roe v. Wade decision in 1973.

In dissent, Justice Clarence Thomas wrote, ‘Today a majority of the Court perpetuates its ill-founded abortion jurisprudence by enjoining a perfectly legitimate state law and doing so without jurisdiction.’”

I know this is off topic, but I think this needs to be shared. Here is a copy and paste from this website: https://www.exposingsatanism.org/clergy-response-teams/

I had read about “clergy response teams” on the Commonsense Show and decided to do a search for them. The interesting thing about this article is the date is January 10, 2017.. Read the below carefully and note the words “social distancing”.

“The Pastor elaborated on how the directives were being smoke screened by an Orwellian alteration of their names.

“They’re not using the term ‘quarantine’ – this is the term they’re going to be using – it’s called ‘social distancing’ don’t you like that one,” said the Pastor.

He also highlighted how detention camps had been renamed to give them a friendly warm veneer.

“Three months ago it was quarantine and relocation centers and now it’s ‘community centers’ and these are going to be activated at the local schools,” he said.

Pastor Revere outlined the plan to carry out mass vaccination and enforced drugging programs in times of crisis such as a bird flu outbreak.

“In the event of an outbreak or a bio-terrorist attack, there’d be a mass vaccination….they have a program nationwide ‘Pills in People’s Palm In 48 Hours’,” said the Pastor who was told that Walmart had been designated as the central outlet of this procedure.”

Just a heads up. Stay safe in Jesus and keep your spiritual antenna up!

Thanks for sharing Stacey. Part of the power to mislead the masses comes from the wording being used on different legislation and initiatives. This is one of the points I made in the article about the new Executive Order issued by Trump regarding religious freedom. When we already enjoy religious freedom in the U.S., why would we need an executive order stating this? Because the Executive Order clears the way for financial penalties to be assessed against ndividuaks that will not follow the new One World Religion! The Executive Order has nothing to do with “religious freedom”; it is the antithesis. The average person would look at the words and think that this is a good thing but in our upside down world, that law will be used to BANKRUPT Christian churches and organizations and missionaries in the future although it appears like an innocuous Executive Order; it is the OPPOSITE & will be used by governments globally to AID the destruction of other religions while increasing the power & ascendancy of the One World Religion!

I totally agree with you, Expat Gal. Thanks for the heads up on the things you find and post. It is frustrating that we don’t all rise up and say a resounding, “No!” So, I will keep praying and wait for the Lord’s timing. Our prayers avail much, especially when they are targeted to where the Lord is working. After I posted my comment above, I thought I should have added that 2017 is also the year that Fouchi (did I spell that right?) made his comment that the current administration would absolutely face a new pandemic.

Hey Stacey – I was thinking more about the clergy response teams as Dave Hodges had referenced that these had been activated but quoted Mark Taylor who I do not trust as providing accurate information. However, I was thinking how the terms “social distancing” and “community centers” and other terms are embedded in movies, tv shows, music, speeches, news stories, books, etc. as predictive programming. ““This quick acceptance of new laws, norms, and even horrifying incidents, is what is called Predictive programming. Term coined by Researcher Alan Watt, Watt defines predictive programming as, ‘a subtle form of psychological conditioning provided by the media to acquaint the public with planned societal changes to be implemented by our leaders. If and when these changes are put through, the public will already be familiarized with them and will accept them as natural progressions, thus lessening possible public resistance and commotion.’ From terrorist attacks to presidential assassinations, to new technologies and important political events, predictive programming has been utilized in a number of ways by the government, media, and ultimately, unknown Higher Powers. Controlling minds and preconditioning ordinary American folks through subtle expertize since their childhood, the media and the state set the ball rolling right when we are in our early developmental phase of life. The most popular example of predictive programming and its complex integration into the everyday life is that of 9/11 foreshadowing in cartoons, films, advertisements, and television series. Dating back to as early as 1948, with the animated series ‘Porky the Pig’ first mentioning ‘falling towers’ [1], the efforts dedicated to subconsciously readying American minds for an attack on the World Trade Centre have been thorough and extensive.” More details on this technique can be found here – https://www.aliennationcorporation.com/hollywood-controls-the-future-predictive-programming-mind-control-and-notorious-events-in-us-history/ Actually his name is spelled Anthony Fauci. I did see… Read more »

I’ve saved the link to check out later. You are right about the predictive programming. All it takes, though, is for a person’s eyes to be opened and they can see it all around. Keep hiding the Lord’s word in your heart.

Moloch is high on dead baby’s–Obama is grinning ear to ear–he knows his horror show is fast approaching.

Dr. George Tiller (the Baby Killer) was gunned down May 31 2009 in church while his wife was singing in the choir at the time. Tiller was a late term abortionist and his assassin was Scott Roeder, an anti-abortion “extremist” according to news outlets. Who was the “extremist”? Roeder gets life in prison (probably saved a few baby’s from the butcher) or Tiller the Baby Killer that was killed in church and went straight to Hell for eternity.

I believe that Scott Roeder was under MK Ultra mind control as I read articles at the time that supported this. Sadly, I believe this man will be one of other extremist “Christians” that will be a set up to turn the masses against Christians by demonizing Christians as so intolerant to commit murder. I wrote an article on Z3 News about this. When the Reset happens under Trump, Trump will have so closely linked himself to Conservatives, Patriots & Christians that these groups will be the recipients of hate as millions of people struggle to survive….😢

You said: “Trump will have so closely linked himself to Conservatives, Patriots & Christians that these groups will be the recipients of hate”

I have had the exact same thoughts.

Probably so Expat Gal-but the sheer blatant hypocrisy of a baby butcher sitting in church while his wife is singing in the choir is enough to make a lot of people go postal. Surprised that Scott Roeder only got life in prison–for sure the abortion industry would have preferred he was skinned alive and his body rolled in salt. Babylon is waxing worse by the day.

Hi Johnny – From your comment I realized I mixed up Scott Roeder with Dylann Roof who killed 9 black people at a church in Charleston, SC. Sorry about that. Yes the blatant hypocrisy worsens. I feel that now with how many people believe a person has no right to choose whether or not to receive a “vaccine” in his/her body, yet a woman can choose to kill a baby she is carrying in her body., in some states even after the baby has been delivered.😳😢.