“The PCR is a Process. It does not tell you that you are sick”. Dr. Kary Mullis, Nobel Laureate and Inventor of the RT-PCR, passed away in August 2019.

This misuse of the RT-PCR technique is applied as a relentless and intentional strategy by some governments to justify excessive measures such as the violation of a large number of constitutional rights, … under the pretext of a pandemic based on a number of positive RT-PCR tests, and not on a real number of patients. .Dr. Pascal Sacré, Belgian physician specialized in critical care and renowned public health analyst.

In a bombshell decision, the Centers for Disease Control and Prevention (CDC) has withdrawn the insidious PCR test as a valid method for detecting and identifying SARS-CoV-2.

“After December 31, 2021, CDC will withdraw the request to the U.S. Food and Drug Administration (FDA) for Emergency Use Authorization (EUA) of the CDC 2019-Novel Coronavirus (2019-nCoV) Real-Time RT-PCR Diagnostic Panel, the assay first introduced in February 2020 for detection of SARS-CoV-2 only.”

In preparation for this change, CDC recommends clinical laboratories and testing sites that have been using the CDC 2019-nCoV RT-PCR assay select and begin their transition to another FDA-authorized COVID-19 test.

CDC encourages laboratories to consider adoption of a multiplexed method that can facilitate detection and differentiation of SARS-CoV-2 and influenza viruses. Such assays can facilitate continued testing for both influenza and SARS-CoV-2 and can save both time and resources as we head into influenza season. Laboratories and testing sites should validate and verify their selected assay within their facility before beginning clinical testing. (emphasis added)

It has taken them almost two years to recognize that the PCR test is flawed and invalid.

Read carefully, what this CDC directive admits is that the PCR test cannot differentiate between “SARS-CoV-2 and influenza viruses”. We have known this from the outset.

This advisory by the CDC issued in July 2021 is to be enforced in the course of the next couple of weeks leading up to the January 1st, 2022 deadline.

Will it be carried out?? Visibly there is no transition towards “another authorized Covid-19 test”.

WHY is CDC waiting until December 31, 2021 to enforce the suspension of the invalid and flawed PCR test?

Seasonal influenza which starts in October has contributed to driving up the number of so-called “Confirmed Covid-19 Cases”.

And in recent developments, these PCR positive cases are routinely being categorized as  “Confirmed Covid-19 Omicron Variant Cases”. It’s also a period of the year when people catch a corona common cold which often results in a PCR positive.

This upward movement of PCR positive cases is now being used by corrupt politicians to sustain the Omicron fear campaign as well as impose the “The Covid-19 Christmas Lockdown”.

Millions of people Worldwide are lining up to be tested as well as vaccinated to “protect themselves” against SARS-CoV-2 (which cannot not under any circumstances be identified by the PCR test). 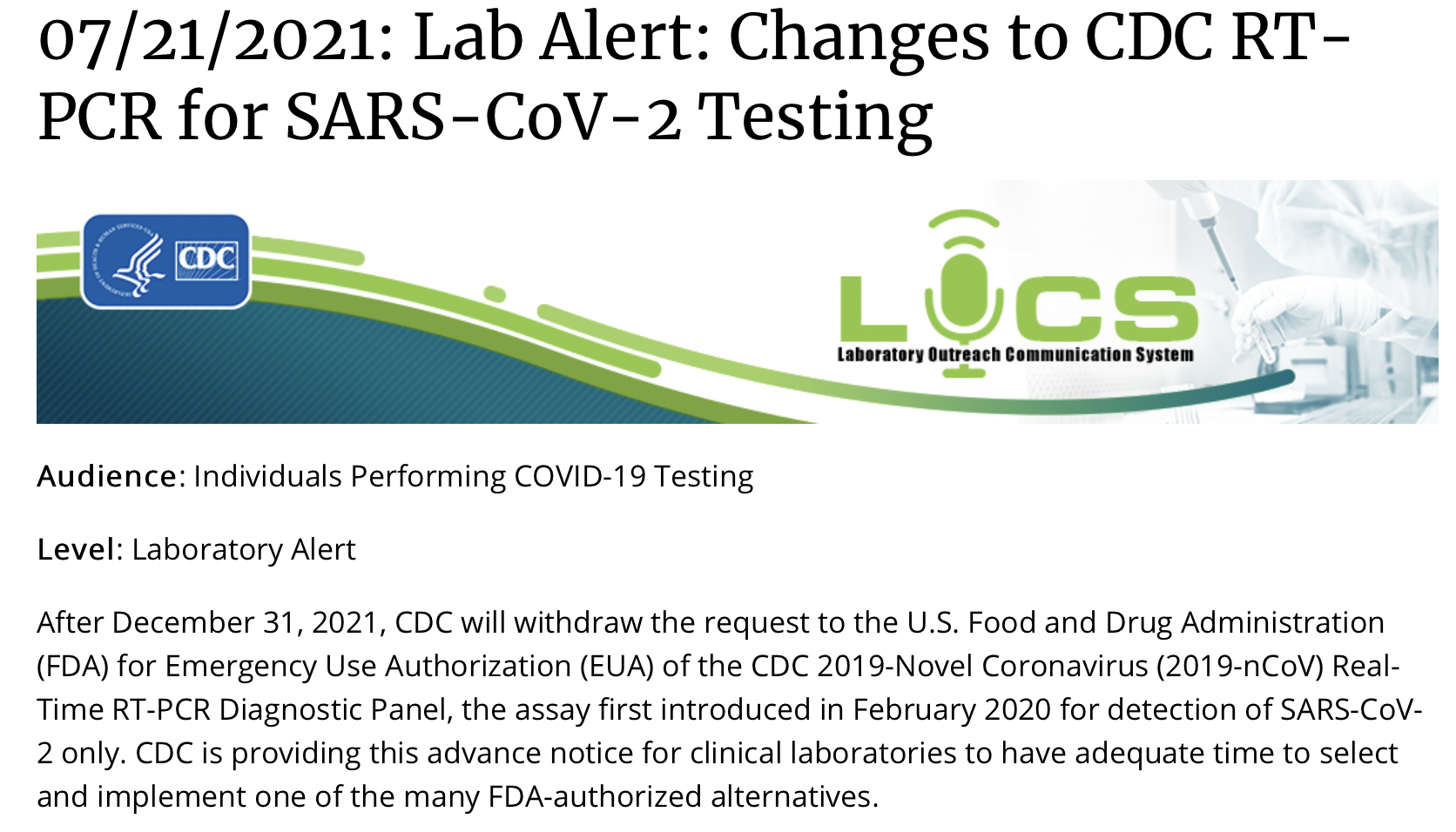 What this means is a Mea Culpa. A tacit recognition by the CDC and the FDA that the entire data base generated by the PCR test is invalid.

Almost a year ago, in January 2021, the WHO questioned the validity of the PCR test which it had itself put forth as a means to detecting and identifying SARS-CoV-2 at the outset of the alleged pandemic in January 2020.

The Data Base of the Alleged Covid-19 Pandemic

Several billion people in more than 190 countries have been tested (as well as retested) for Covid-19 using the PCR test which is flawed and invalid.

The pandemic is said to have resulted in more than 5 million Covid-19 related deaths.

These are nonsensical and meaningless numbers. It’s a Big Lie.

And this data base is being used to justify the imposition of the Covid-19 mRNA “killer virus”, not to mention the “vaccine passport”.

Bear in mind, in recent developments, the PCR test is being routinely used to allegedly “identify”the variants including Delta and Omicron, which is an impossibility as well as a lie.

Scientific nonsense. PCR positive cases (which according to the CDC could be the result of seasonal influenza) are now being routinely assigned to the Omicron Variant:

“The decision by the government to reimplement the need for a PCR test from all individuals arriving in the UK from abroad on day two, with self-isolation until a negative [PCR] test is reported, while frustrating for those travelling, is essential in order to rapidly identify cases of infection with the Omicron variant and implement prompt isolation and targeted contact tracing to limit the spread of the variant in the UK. (emphasis added, Guardian, November 27, 2021)

Without the Flawed PCR Test, the Covid Christmas Mandates Do Not have a Leg to Stand On