Today I saw the top of an unidentified object that formed something like a price chart and I understood it was showing price movements for Bitcoin. From the top left corner, it dropped down steep, then retraced part of the way back up and then down steep again to a lower bottom. It reminded me of the price chart I saw on July 22 and I think it was showing none of that has started yet, confirming what I was already thinking because the drop so far has not been as steep as what I saw. Also, the previous chart showed the drop was preceded by a brief period of sideways movement so that’s the pattern I’ve been watching for.

So far the current drop has failed to close any hourly candle below the $38,000 support level, which was highlighted by a cycles analyst I follow. So if it fails to get through there, a higher top becomes more likely.

Also during my prayer time on July 31, the date September 4 was shown to me. I looked it up and found it’s a Saturday, assuming it’s referring to this year. Since equities markets are closed on Saturday, I think it might be related to Bitcoin, perhaps showing a turn in the market. Another possibility is there could be some kind of event happening that day. There has been a recent increase in naval activity near the South China Sea. However, since the year was not revealed, it’s just something I’m watching.

Thanks Chris. I guess the bottom would be 19k-20k during this crash mathematically. But I changed my mind after reading your article of sharks and bears dream. The crash could be more severe than we think and it could go lower like 5k😅 Ironically it can be our life changing opportunity ❤God bless

Looks like DCA approach may be the best here.

Yes. I prefer DCA strategy during bear market because I don’t know the exact bottom. God bless you.

Hi Christopher, are you doing well?
God bless you so much!
You are really a blessing to us all.

Thank you Hoyoung I am doing well. I had a dream a few days ago I forgot to mention it is similar to Silent Warriors recent posted dream. I saw a chart of BTC with a big drop down very steep long red wick then a huge steep recovery back above where it dropped from. I don’t know on what kind of scale this was on but it seemed like a major move so a bigger scale. Today in a dream I saw BTC at 44-45k. I saw 43k BTC. I saw ETN moving down to 1 cent (didn’t see where from this time). I saw ETN prices of 3.4 cents, 3.8 and 4.2 cents. God bless. Christopher.

Good to hear!
I’m currently watching closely to the market and thinking there is a possibility of your 48.2k double bear dream comes into play

I believe we are going to have a crash in ADA $3.40~$3.50 area and I believe it will be in BTC 50k~55k area. It will fulfill the U shape CH shared us earlier and some 53k numbers and possibly 55k numbers.
(A korean guy had a dream for this movement and he saw the top of this movement was BTC 55k area and in the dream, he sold his coins at 53k)

I think this aligns very well with everything we have, the movement we are seeing as of now, and also the shorting area CH gave us.
But please seek the Lord and confirm yourselves.

Thanks Hoyoung, can you share the discord please? Also, when you say you saw a crash, how big was it? Is this the drop to 30k? Also can you provide the link where Fireside ministries commented on this please? Thanks

That is all I saw. I don’t know how big it was.
And Robyn has been kept talking about cryptos lately.
You can check his late videos on youtube.

It’s all I saw. I saw Hbar going $0.90 and I felt it was outperforming than other coins.
And separately, I had another dream on another day for Hbar, I was selling half of hbar at $1.30.And I had millions profits made by coins in the dream. I believe this second dream is personal and for me strategically.

Hi Z3 this morning in a dream I saw $28,000 BTC. Then later I had a dream where I saw under water again seeing lots of sharks, (like the other time I posted with the image), except this time the sharks were frenzying and swirling around seemingly attacking something that fell in the water. It was like this photo but with even more sharks. My thoughts are more significant sharp decline is coming. God bless. Christopher. 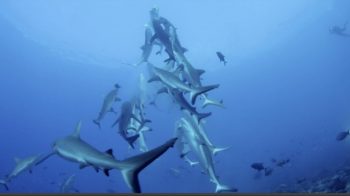 Thanks Christopher. This is very helpful. Since you mentioned your previous comment from August 21, I pasted it below:

James, I think this dream is possibly in the process of fulfilling now.
So which means there is one more drop left and it should be the drop that touches doge 19cents area.
Also, what I found interesting is.. the September 4th you saw was the day that BTC was at 50500 and 50k area.
And CH commented below his dream about 50500 and dropping from 50k area on this post. And the drop happened 3 days after on Sept.7th, yesterday.
pretty interesting?

I think we are going back down to around 30k as per silent warriors dreams. Then after that on route to 100k BTC?

Thanks for those insights Hoyoung. I’m still unclear about the meaning of September 4 since there were no details provided to connect it with BTC or anything else. I did not see the year so it might be for a future year.

Doge hit 20.4 cents. I remember Robyn one time said the prices are not exact but in the area. We might be heading upside. I think either downside or upside makes sense now. Time for some prayer

agree, think it requires prayer for clarity. Technically Robyn said low 20s/19 and on CoinMarketCap it is showing 24. Then after that all the way to the big 90. Based on silent warriors dreams and other things, there is also a change it goes down to 30 before shooting up? I seem to have it in my head that this is what some of CHs dreams indicated.

If I were to guess I would say that .19 is unfulfilled. On major high volume exchanges ie coinbase & Bittrex, Doge hit .21ish. Additionally, FireSideGrace got somthing about a stock downturn in September (which would likely bring Doge down as well IMHO)
…
8/26/21rep FireSideGrace saw a graph of the stock market not super high or low all of a sudden rapid decline WAS MONTH OF SEPTEMBER! knew it was NYSE

Thanks for all the replys guys.
In the morning, the Lord told me there is another drop coming and your comments also boost my faith.

I think something to keep in mind is that there will be ups and downs on the way down. We might be heading slightly up, but CH and others have targets from 41000, 38000, 37000 BTC etc., before a big bounce up. Even if Doge did hit 0,204, how far will it and every other alt coin drop if BTC goes lower by a few thousand more? Just my point of view…

On some exchanges the latest high was $42500 – maybe the $42400 and $42999 you saw are the two local highs (one happened and the next one to come). Your feeling about $38000 support is where we are now so we will see if the support holds and then we can look for the $42999 target. That might be the timing for your two dreams showing steep drops to new lows?

Thanks for the info Scott. I didn’t know that but since I only track the price on Coinbase and Kucoin, I’m still waiting and expecting to see $42,400 and $42,999 fulfilled there.

Since I just saw those prices on August 3, i’m looking for the fulfillment coming after that date so anything that happened previously is irrelevant.

what do you mean by the top is not in JameS?

New video from the one who had bitcoin crash vision and xrp delivery dream.
His videos are very helpful and good to follow
God bless everyone.

Hi James thank you for sharing. I had some dreams recently I want to share. Yesterday I saw $49,853. I saw two figures in low 40k (we moved up from 38k so sharing this late). I saw $21,819. I saw 100k. I saw -$65,329 (like minus symbol). Today in dreams I saw 0.29 (I thought it may be about ETN about the 30 cent plus move). Then I saw $50,500 in a vision. Then I had a dream of the BTC price rising up to 50k, there was a sharp decline but then the price pumped to 62k and I wanted to sell BTC and ETN, and then I saw the BTC price was at 55k. I also saw the figure 71%, describing an increase (perhaps it could be BTC which would be a rise to 68k, but I’m not sure). Please seek the Lord for the correct interpretation and sequence. Be aware if we move to these higher figures its quite possible ETN could run. As I mentioned some time ago when I got the two buy prices for ETN of 1.5 cents and $0.004 at the same time in a dream, that I didn’t know if $0.004 would be reached before the rise to 30 cents. We didn’t get down to $0.004 yet, and I believe this occurs near 19k or so. I have dreams showing a major crash, but timing I don’t know. We could head up to 50k plus area first, and if we do then watch ETN. Please seek the Lord. God bless. Christopher.

Thank you James for sharing, I feel much better after reading this. Blessings

Thanks for this article, JB. I think this summer rally in cryto will be short-term and powerful. In my view, top could be around 55k. 4th Sep caught my eyes. The coming crash could be related to military activities or conflict over Taiwan. God bless you.