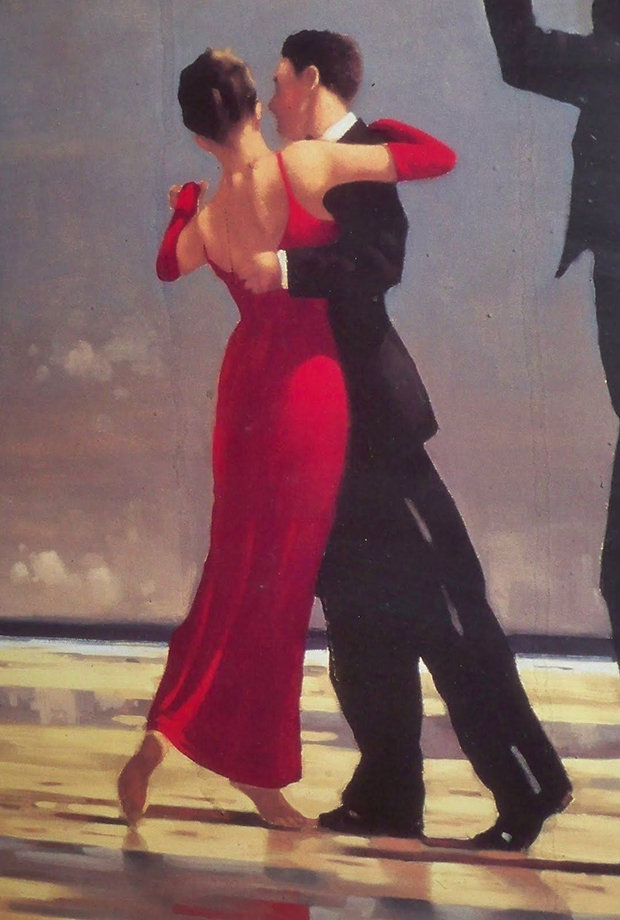 In a dream on February 15, 2020, I was in a very large mansion where many people wearing fancy clothes were having a formal dance in a large ballroom. Suddenly, several very large guns, like the size on battleships, started shooting and killing all of them.

I watched this happening from a large hallway near the ballroom. I saw people panicking and trying to escape, running and screaming, but they were all being slaughtered. My focus was on a lady with brown hair and wearing a red dress. Like the others, she was terrified and running for her life, but she was unable to escape. I saw her falling to the ground.

I knew my life was in danger so I ran outside and down to the street in front of the mansion. It was night time so it was dark as I looked back at the mansion which was up on a slight hill about a hundred yards or so from the street. A large grassy lawn was between the street and the mansion with a driveway along the right side of the lawn. Then I saw three men standing on the front porch and looking directly at me. They were each wearing black tuxedos and holding rifles which they began shooting at me, but instead of bullets, I saw small white objects coming towards me and landing in the street all around me. I picked one of them up and saw they were cigarette butts. End of dream.

Since the woman was wearing a red dress, I believe the people dancing in the ballroom represented bearish traders celebrating their profits from big drops in the markets. The sudden appearance of the big guns shooting at them represents a sudden bullish turn in the markets because shooting people is a bully tactic and bullies are a dream symbol for bullishness.

Being able to see these things from a distance represents prophetic insights as God was helping me avoid getting slaughtered with the others, so I escaped unharmed. The three men shooting at me were also bullies, so they represented more bullishness.

Cigarette butts are a dream symbol for options expiring worthless because they only last for a short time and become worthless when finished. So this is a warning to the bears to buy more time than expected to avoid this problem. Having a longer expiration date on options costs a lot more, but it makes it possible to withstand bullish moves and wait for the next drop.

Prophetic dreams like this usually reveal partial information, missing prices and dates, or in this case both, so this is not a recommendation for trading. Based on the extreme volatility during the past three weeks, it seems likely there will be more than one sudden bullish turn, so beware.

James, The market closed at 2304. Just 144 points away from 2160 the number you saw. Maybe it will take a couple of trading days to get there. Let me quote from ” https://gainspainscapital.com/ ” The coronavirus has burst the ” ” ” “Everything Bubble. Regardless of what happens with the economy or the virus, the damage has been done to the massive debt bubble. Across the board, credit and debt markets have ended their bull markets. To fight this situation, the Fed has gone NUCLEAR with monetary policy. In the last three weeks, the Fed has: 1) Cut interest rates from 1.25% to 0.15%. 2) Launched a $1 5 trillion repo program. 3) Launched a $700 billion QE program. 4) Begun buying commercial paper debt instruments. 5) Opened the discount window to the eight largest banks in the US. 6) Opened dollar swaps with international central banks. 7) Opened credit windows to the money market funds market. If these policies sound familiar, it’s because the Fed basically just ran through its entire 2008 playbook. The big difference this time is that instead of taking a year to do this like it did in 2008, the Fed ran through all of these polices in less than a month. Thus far, none of these policies have worked. As I write this Friday morning, stocks have yet to stage a meaningful bounce. As a result, we are now seeing calls for the Fed to start buying corporate debt and municipal debt. We are also now beginning to see talk of helicopter money being implemented as well, including mailing checks to people who cannot work due to the coronavirus. This combined with various stimulus programs will mean TRILLIONS being injected directly into the financial system. This is all going to unleash inflation. Bond… Read more »

Could be right, but the woman’s brown hair makes me think this was about equities.

It is about equities as you say, but bullish silver and oil participate. SNS

Thought this headline was interesting:
https://finance.yahoo.com/news/trumps-response-to-coronavirus-pandemic-may-cause-the-next-great-depression-150433308.html

James,
as always thank you for your insight and sharing your dreams with explanation.

Thanks James, god bless you.

Wow, James. I believe this was an amazing warning about this massive EQ tumble. Pray about this-but could the “butts” coming out of the gun instead of silver bullets imply the double rounded pattern that’s forming in USLV now? Instead of silver bullets coming out? That silver is at its bottom? Tuxedos imply bullish silver and oil in tandem. You had a dream about Katherine Hepburn’s butt too. Katherine means pure-which I equate to purification of silver. Women are short positions. She tumbled down and bottomed out? Pray about three men pointing to 3M as well, I received a dream about green masking tape like painter’s tape that was on upper kitchen cabinets before this 3M mask thing was in the news. The LORD said watch MMM.

I think the ballroom dancing dream is warning of a massive bullish move to crush all the bears. +230 today shows what they can do when they want to crank it up and this was just day one. Cigarette butts often represent options expiring worthless which fits the context of this dream because it’s another warning to the bears that things are going to take a little longer than expected.

Regarding the Katherine Hepburn dream, I believe she got this part because she was 22 years old at the time of the 1929 crash and has brown hair, the color of equities, but I have wondered if there might be a double meaning that would include silver because the sand on the beach was white and her skin was also very white.

Maybe the cigarette butts coming out of three guns are a warning about “paper money” 3x ETFs in this unbelievably volatile market. You can get slayed in no time if you aren’t on top of them with the sudden reversals that have been happening in this unprecedentedly difficult market. I am thankful for this red dress warning to keep me sidelined this weekend even though I was tempted to trade. I might miss a big trade, but I’ll sleep better. It was a timely article and warning for me. Thank you.

Agreed – Direxion Junior Gold has been savaged. in the last few days

JNUG cruises, that’s for sure. Blessings to you and Jillian. Always appreciate your jump on the market news from the other Hemisphere.

Thanks Carolanne -Enjoy your posts.

Thanks, Phil, We appreciate the heads up. JNUG is up 46% after market. I just heard Feds are making more cuts, so I’m not sure how that will affect metals. This is anything but a typical market, so God only knows how markets will respond to news. The takeaway is that He has everything under his control, so it’s times like these that we can lean in closer to our Tower of Refuge and Strength, where the Enemy can’t touch us. I just got a text of photos that shelves are completely empty at Trader Joe’s in Orange County, CA. It seemed a fitting analogy for all the traders right now.

Thanks Carolanne
This crash will open up people’s hearts to the gospel.
Money and wealth has too long been a safe haven . The reality is it’s a tool not a God,
I do believe their are Joseph’s being raised for tough times ahead though,
God bless phil

James,
After I wake up and check the market, I’m shocked to see S&P increases 230 points. Glory to God who gave you all the revelations. And also Glory to God who gave you the wisdom to put all the revelations together. And thank you for all your hard work. Two years ago, the Lord gave me a word saying that He will open a special door for me and from that special door I would draw out a lot of good things. More wonderfully not long ago the Lord has put some finance into my hand , so that I can take up this rare opportunity of the market. I think this opportunity should be the special door the Lord open for me.

Hi all
Last minute rally on ASX on Friday brought some joy to traders. So will see what happens to the DOW tonight
God bless
Phil
ASX up only one point on the day

Hi all
IG markets weekend Dow index shows a fall of 800 points. This can go up and down during the next 24 hours but has been a reasonable indicator. We may not see the bottom till Friday equinox.
Don’t stress . I’m down $18k on my gold miners and I refuse to get high blood pressure. We will see a bounce. When I’m not sure , God bless
Phil

Clarification- in terms of bottom I am talking about a short term low before a bounce to late March then April downtrend, regards Phil

Wow, Silver at $12, looks like all investors are just holding cash.

Another possibility is that the lady in red represents the Red Chinese, and her dance partner is the U.S. For many years, the U.S. has been “dancing” with the Chinese in commerce, but now, this Coronavirus has suddenly put a huge stop to commerce.

This dream may have an additional interpretation. It predicts the terroristic actions of assassins who have a program to eliminate the extremely rich elite who control most of the world’s wealth. This will, they believe, spread the wealth further around and punish those who gained it by illegal methods.. In the coming depression many extreme actions will be taken which are unimaginable today. Killing off the billionaires and multi-millionaires has been shown to me some years ago, but it won’t be completely successful. The cigarette butts may represent a popular method to reduce the high anxiety in both the very rich and very poor caused by the severe depression.

James are you still expecting a bigger crash sometime this fall season? Is that when this huge drop will happen?