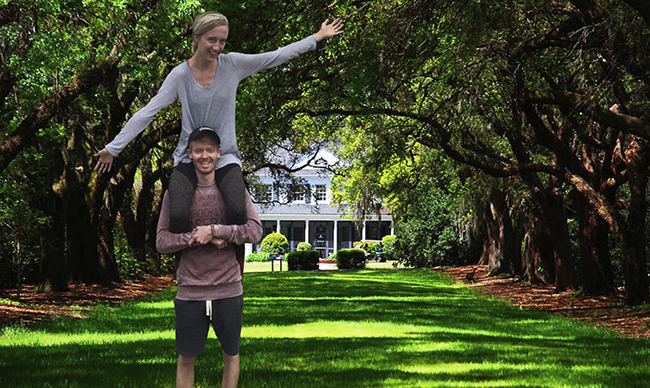 Well, I was supposed to be in bed an hour ago resting up for another big day of pressure washing but after reading so many nice comments about my previous post in which I shared our plans to visit my daughter Avery and son-in-law Peter, in Uganda, I wanted to share a little more about their story, including the 40-minute video below.

My favorite part of their story is that Avery always wanted to be a mommy and have a family, but after graduating from college, she felt the call of God to move to Uganda to help special needs kids. She was so torn between these two passions because it looked like moving to Uganda would put her dreams on hold indefinitely.

At the time, she even received a prophetic dream in which she was standing at the altar to get married but felt the call of God tugging at her heart and at the last minute decided to run out of the church to follow God. I was so proud of her for that because it looked crazy because she had no money and her work in Uganda is all volunteer work, no pay. That took a lot of courage and faith but she did it and wow, look what God has done!

We never saw it coming, but on a short trip to Kenya with a group of her friends, she met Peter and they quickly fell in love. When they got married in 2018, I made the video shown below and called it “Avery Caught the Bussey” because when they were dating, Peter lived in Nairobi Kenya which was a 12-hour bus ride from where she lived in Uganda. They often made those long bus rides just to see each other even for a weekend which made no sense at all unless you’re totally love sick and then it makes perfect sense.

We were concerned about their safety riding those busses, especially with Avery traveling alone and sometimes catching the bus late at night, but they assured us it was totally safe. But after they got married, they told us it was incredibly dangerous and they would never to it again.

The things we do for love. This video shares more about their story and is also available on Bitchute.

So happy for you and your family. Thank you

Thank you for sharing. You should be so pleased. You know as you shared about your house,, the thought came to my mind that with the market being a sellers market and people offering more than the asking price, might not have to do all that work and wear yourselves out and possibly still get your asking price? Nothing is impossible with God. At any rate I’m sure He will lead you. Wishing you good success, a quick sell and a wonderful and safe trip!

Hi James,
Congratulations on the arrival of your soon to be grandson which I hope brings so much joy to you and your daughter and her husband.
I hope you all have a really great time together out in Africa with many blessings coming your way.
Thanks so much for sharing this family love story on video which I really liked.
At the end I thought to myself that you have a hidden talent here James as I could somehow see you as a film director the way you put this together with a lot of hard work and dedication.
Well done.
I also thought it was an amazing way your daughter met her future husband through gods calling which I guess goes to show you never know what’s around the corner.
I also thought when you were selling your house it reminds of a post you had on your site a few years ago about an old lady who always knew why it was time to sell her house as it coinsidered with a stock market top before a deciline.
Take care James

Thanks David. We were all amazed how God brought Avery and Peter together because they are perfect for each other. I had fun working on her video and have always wanted to produce documentaries.

James – How incredibly sweet! Avery and Peter make a lovely couple. what a charming story and thank God for keeping both Avery & Peter safe on those long bus rides. ❤️

You have some great editing skills which you have now let the cat out of the bag. 😂. The Steve Martin clip made me tear up.

What a wonderful story & I will be praying for the most amazing time for all of you to share. It is nice seeing something so joyful in the midst of the craziness. It reminds me that relationships are what matter most. Our relationship with God, our significant other, our family, our child/ren, our friends, our co-workers, etc. I am so glad that you & your wife are taking advantage of this window of time to share in this excitement of welcoming your grandchild into the world!

May you all be exquisitely blessed. 🙏🏻💝

Btw – You know we will all want to see pictures of your grandchild! 🥳

Z3 family i feel this is the perfect opportunity to show our love and lend support with the expenses etc and send the Baileys to Uganda with a bountiful gift. They live by faith, and do not ask nor look to man to supply. their needs. I sense they do have a need.
Please would you consider sowing into this trip, so that they will have all sufiency in all things and an abundance for good works. Let’s bless them so that they will also be able to support the new parents with their expenses.
James did mention Avery is not on a salary so let’s not miss this opportunity to bless and support this precious family. I do realize many do support this site and things are tight, but do consider giving even sacrifiacily if need be.

Heidi Baker says love looks like something.
That something is finances right now, amen.

What a beautiful video James! Thank you for sharing it with us.

Min 5:57 did it for me. I never thought another little girl had this dream just like I did at the time. Sometimes you gotta hear it. I had to put other dreams on hold because I actually became a mommy at a young age, but the breakdown of my marriage took me through one of those journeys where I now despair and frankly I really don’t understand or care why things happened the way they did to me. I’ve felt lack and deprivation in this area all my life, yet been very very blessed in other ways. Thank you for sharing this video and message. I am usually not up at this early, especially since having lost a job in January, but the Lord brought me to see this video. Thank you.

James,
You must be so proud of your daughter and son in law. Congratulations to you and your wife for becoming grandparents.
Blessings to the whole family
Ant 🐜

How beautiful they are!💛 Congratulations 😄 God bless your family, Mr.Bailey.

Thanks for sharing that video with us James! Your daughter was adorable as a little girl! She has grown up to be a beautiful woman of God! Praise the Lord! You and your wife did a wonderful job and I loved how she had a great relationship with all extended family. The grandpa one was very special. I would love to make something for your daughter and baby James, I don’t think I can make it in time for you to get it to take to her but maybe for later? I love sewing gifts for my friends and use it to bless people as part of my ministry. If you could email me your address, that would be great. I think you said it was going to be a boy. I will have to get started! Congratulations to you and your wife on your grandchild! Praise the Name of Jesus! 😀

Congratulations James! What a beautiful couple Avery and Peter make. God bless them both and their Children as well. I’m so happy to hear they are both following the will of God and fulfilling their life destiny and calling together.

Your entire family is truly beautiful. Thank you for sharing this touching video with us all. You made my heart so very happy. I know you are a proud father. Brightest blessing to you all James! 😇💝