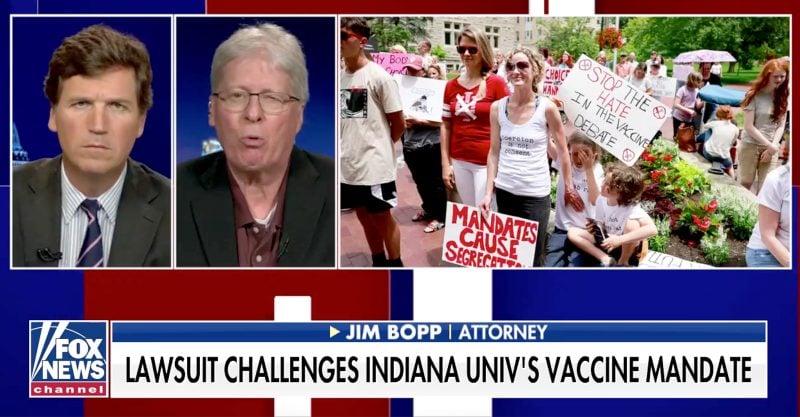 Carlson pointed out that the World Health Organization recommends kids under 18 not get the COVID vaccine.

“People feel like they have no choice. They’re not going to commit a felony by getting a fake vaccine card, though clearly some are. They need people to protect them in court and that’s now happening.”

Under the school’s mandate policy, exemptions will be “strictly limited” to a “very narrow set of criteria” to include medical exemptions and “documented and significant religious exemptions,” the university said.

Students, faculty and staff will be required to upload a photo or a scan showing proof of vaccination. Staff who don’t comply with the mandate will be fired. Students and others who don’t get the vaccine will face canceled classes, and have their email accounts and pay cards (Crimson Cards) cut off.

Bopp told Carlson that while “most governments are lifting [COVID] restrictions and limitations,” Indiana University’s vaccine mandate for students is “one of the most severe, rights-violating” policies.