You are here: Home » Church » Teaching » Ascending the Holy Mountain of the Lord

In Sep 2019, I saw myself climbing the mountain of the Lord. I was getting many demonic attacks at the lower rungs of the mountain in my life and I knew that I need to climb to higher altitude.

It was a hard climb, furthermore, I was a newbie at climbing. Every step up the rocky mountain took a lot of effort out of me. The path up the mountain was narrow and winding. I was afraid of slipping so I tread carefully. It was a great distance up. I was also climbing at night in the middle of a snowstorm. I was worried that melted ice would make the stone cliff even more slippery.

I have included a photo to give a sense of how the mountain looked in my vision. 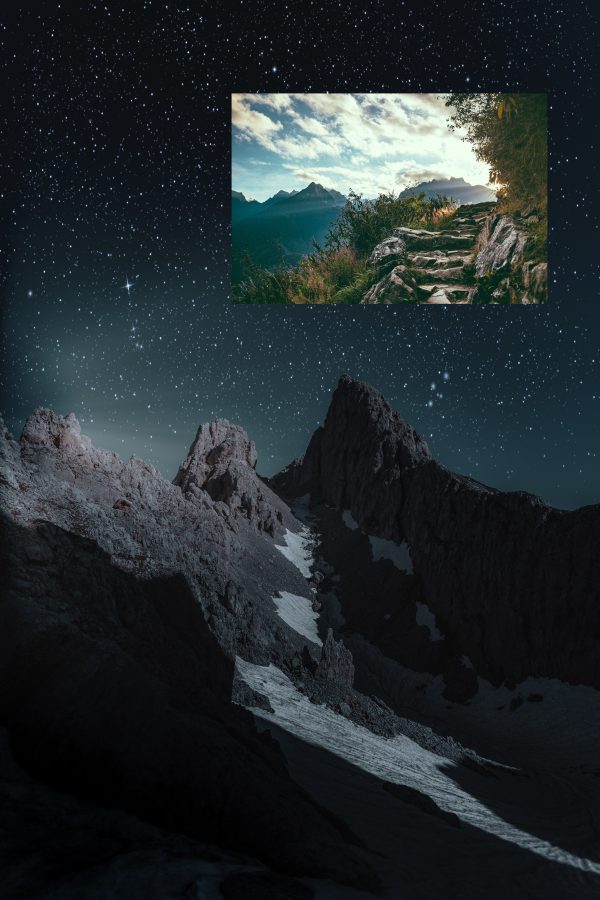 Along the way, from time to time, I would run out of energy. When that happened I rested for a while. In my vision, I saw angels tending to me. Angels held an umbrella over me to block the snowfall. I was gifted with a warm coat from God somewhere along the way. I wasn’t cold at all as the coat was supernaturally warm even in the harshest winter. When I sat down to rest for a moment, I saw angels offer me hot tea and snacks to replenish my energy a bit.

For he will command his angels concerning you
to guard you in all your ways.
On their hands they will bear you up,
lest you strike your foot against a stone.

However the angels could not help me to climb. No one could climb for me. I knew and I was determined that I would ascend this mountain to find God. It was imperative for me to climb up high and quickly, because I was sick and tired of the demonic attacking me, trying to destroy my life for many years. I was determined to find God, find a way to get to God closely and quickly or die along the way, so great was my determination.

Weeks developed into months, but every day I was worshipping God, praying hard, warring in the spiritual. Along the way I discovered a secret about climbing which I want to share with you, because God loves you brothers and sisters in Christ, even though I do not know you.

I realized that the higher you climb, the easier the steps became. I do not know if it was because my legs and muscles got used to the climbing momentum. I also realized a great secret. At ground level where I first started, I had seen many Christians like you and I. There were thousands of demonic birds hovering around the base of the mountain, like a shifting black cloud. These demons were attacking people. Many Christians were mauled and clawed by the sharp claws and beaks of these demonic birds. They were taken out at the lower rungs before they even try to climb any higher. There were many injured Christians at the base, licking their wounds but the longer they stayed there, it worsened the situation, until whatever strength they had initially was depleted by the constant barrage of attacks.

Who may climb the mountain of the Lord?
Who may stand in his holy place?
Only those whose hands and hearts are pure,
who do not worship idols
and never tell lies.

He will not allow your foot to slip; your Protector will not slumber.

He makes my feet like hinds’ feet [able to stand firmly and tread safely on paths of testing and trouble]; He sets me [securely] upon my high places.

Please will you all pray for me my Z3 family? To be granted in mercy entrance to this place of the Holy Mountain

Sister Beth, you and your family will definitely be granted entrance into His holy mountain if you want. He wouldn’t have had it if not for us. Look at Psalms 24: 3-4, it tells you clearly who qualifies to go, those whose hands (actions) and hearts are pure (righteousness by the blood of Christ not our own) and sincerely seeking Him.

Yes HIS not ours

Thanks for this sharing.

For the last few weeks I’ve seen or heard the word PERSPECTIVE. Certainly has gotten my attention to rise up higher and take a different look at my situations that surround me
Thanks for another confirmation

Great to hear that! Debi. I hope you get your perspective in the Lord soon, mightily! Looking at the same things through the perspective of the Lord.

For some reason, this article brought me to tears. Thank you for sharing. God Bless.

That is beautiful. Thank you!

Dear LoriQ, Allen, Mary, glad that God spoke to you.

Yes reminds me of the book Hinds Feet in High places. It might be on a pdf since it is quite old. You will love it if you have never read it. There is one for children as well.

Thanks for sharing. I will check it out

Truly an amazing book! I consider it a Christian classic like Pilgrim’s Progress or Mere Christianity. Every time I have read it, it speaks to me in a different way.

Great word VAS! Thanks for the encouragement. I have experienced the same things in the process of being drawn progressively into a higher place and vantage point. Went to your website and really enjoyed your posts. Love your confidence mixed with humility, a balance that only He can accomplish in us.
Blessings! Bill

Thanks for your encouragement Bill F! Yes, the similar experiences of brothers and sisters encourages us and propels us forward to do more for God. God bless you, brother Bill F.

I HAD AN ENCOUNTER WITH THE LORD AND I HEARD HIS VOICE THUNDER OVER MANY -“RESTORED”
By Lana Vawser
https://lanavawser.com/2021/01/06/i-had-an-encounter-with-the-lord-and-i-heard-his-voice-thunder-over-many-restored/

Thanks Marcio. Yes, I love Lana and I have read it.