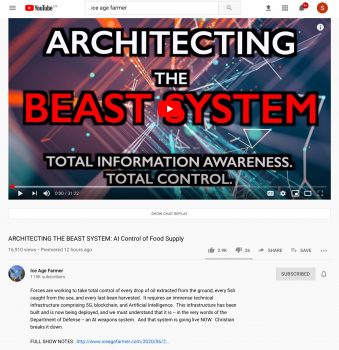 Z3 Community – I am sounding the alarm of the Beast System rising at break neck speed around us! I have written in multiple articles about the Mark being the vaccine with nanoparticles (that can change DNA) and an RFID chip & possibly the quantum dot tattoo referenced in a prior article which will enable the recipient to pay for all goods & services. I have shared the Trump Executive Order that now allows financial penalties against countries &/or individuals who do not worship the Beast (I.e. the One World Religion being fast tracked by the False Prophet, Pope Francis).

Another key part of the Beast System is consolidating the food supply under the control of the Antichrist. This is HAPPENING NOW! In both the UK & U.S., there have been massive outbreaks of Covid-19 resulting in thousands of animals being killed. I could share multiple articles showing how badly the meat supply system (raising, slaughtering & processing) has been decimated in the past few months. This is being DONE by design to consolidate control of meat into a few companies that will be a part of the Beast System. Multiple other companies and individuals are being squeezed out & driven to bankruptcy.

In this video by Ice Age Farmer, “Forces are working to take total control of every drop of oil extracted from the ground, every fish caught from the sea, and every last bean harvested. It requires an immense technical infrastructure comprising 5G, blockchain, and Artificial Intelligence. This infrastructure has been built and is now being deployed, and we must understand that it is — in the very words of the Department of Defense — an AI weapons system. And that system is going live NOW.”

The U.S. Government has now taken control over the PRODUCTION, TRANSPORTATION & DISTRIBUTION of the ENTIRE food supply & any resource the government deems “essential”.

Links for the articles referenced in this video can be read here.

Time is short to make & institute your plans for survival outside the Beast System.

WOW. This research is PRISTINE. So thorough and well organized, easy for people to follow, and absolutely must be shared outwardly.

Thanks EPG, for continuing to illustrate the multiple, complex facets of The Beast System and how they’re linking together RIGHT NOW. I feel like many are focused solely on the vaccine – when it will be completed and how/when it’ll be administered. The mark is only one component of TBS; we have to be vigilant and aware of the entire system as it unfolds, so that we may be deliberate in our preparations and able to help others…. BEFORE the mark is fully unleashed.

I pray that we continue to be filled with right knowledge and of course, with more more more and MORE of the Spirit.

As I posted before,I cant see that this vaccine is the actual mark of the beast as it says in Rev 13 from v14 that a statue is set up and all are ordered to worship the statue and whoever does not is killed.It seems from scripture that then the mark of the beast is introduced.I could be wrong and dont want to be contentious at all but I feel that if this vaccine was the mark of the beast then surely the Bible would have mentioned it.
I dont think we are in the start of the tribulation yet as the anti-christ hasn’t taken world stage.In Dan 9:27 it says that he(the anti-christ) will confirm the covenant with many and then break it after three and a half years.I dont think we are at that point yet
I totally agree tho that we Christians should have nothing to do with this vaccine.