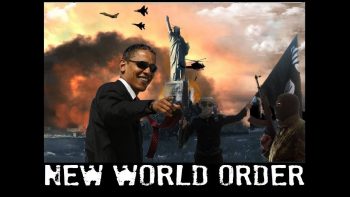 In KijaniAmariAK’s video released 5/20, he shows how there is symbolism & meaning encoded in the news, events & the world in which we live. Key points from the video.

– LeBron James, who organized the “Graduate Together” 5/16/20 event where Obama was the keynote speaker, referred to Obama as “The G.O.A.T.”. In the Bible, goats are depicted as those individuals following Satan versus the sheep who follow God.
– The black robes worn by graduates & Obama in the iPetGoat II video, are linked to judges, priests and the false god Saturn connected to the six point hexagram
– “Destroy & Rebuild”, the message Obama shares, is the first degree, Apprentice, of a Freemason ritual.
– Initiates that complete the third degree to become Master Masons, must endure a strange & magical ritual called “Riding the Goat”
– The coronavirus, as explained in this earlier video he created, signifies the crowning of Obama, as the leader of the One World Government. Corona = crown & virus = venom of a serpent
– The destruction of the Old World Order involves shedding of the traditional systems of morals & values while fully implementing the New World Order with its values & ideals namely the now common terms of “Global Citizen” & “All Together”
– The school mascot for Anayah, the girl who introduced Obama, is the bronco which connects Obama to the White Horse from Revelation 6:2 that goes forward to conquer. Link back to the white horse in Denver at the Pergamon replica at Mile High Stadium in Denver.
– Today’s generation has been raised co-dependent on technology and those who are not Christians will see the “Mark of the Beast” as transhumanism (portrayed very positively in Hollywood movies, video games & books) and as the NEXT step in the evolution of humans!
– U.S. House of Representatives Bill 6666, Testing, Reaching And Contacting Everyone (TRACE), was introduced by Democrat Representative of Illinois and long-time supporter of Obama, Bobby Rush.
– The Washington Times described HR 6666 as “a devil of a COVID-19 government surveillance plot”.
– Obama stated that the “old ways of doing things does not work.”. He said that parents & elders are inept, along with their ways of doing things.

** Obama told the youth to DO WHAT YOU THINK IS RIGHT versus DO WHAT YOU KNOW IS RIGHT! He is encouraging MORAL RELATIVISM which holds that TRUTH is SUBJECTIVE and based on person’s emotions, feelings and/or opinions and that there is NO ABSOLUTE TRUTH. That truth is based solely on facts rather than opinions, feelings and/or personal interpretations.**

**Moral relativism and post-modern idealism are directly CONTRADICTORY to the Bible, specifically John 14:6 KJV which states, “Jesus saith unto him, I am the way, the truth, and the life: no man cometh unto the Father, but by me.”**

– Ferrell Williams from the Neptunus group appeared in the “Graduate Together” special. Neptune was God of the Underworld = Beast from the Sea. Neptune was worshipped as the god of horses, Rev 6:2.
– Ferrell, along with Obama, uses the Vulcan handsign. This sign links to “17” which is “SIN” (Hebrew alphabet shin). This links to the Divine Feminine in Kabbalah which is a connection to Lucifer.

There is MUCH more in the video but I just captured some of the top highlights.

Please hear me out. The Lord clearly told me Barack Obama is not the antichrist, but has been influenced by evil angels. Listen to what Obama said in this video. The antichrist would NEVER say what Obama said.
Quote from Obama:
So it is only because Jesus conquered His own anguish, conquered His fear, that we’re able to celebrate the resurrection. It’s only because He endured unimaginable pain that wracked His body and bore the sins of the world that He burdened — that burdened His soul that we are able to proclaim, “He is Risen!”
https://www.youtube.com/watch?v=P-WLa-iqXJw
Believe as you wish my dear brothers & sisters. The antichrist has not been revealed, yet.

The Lord did not tell you that Obama is not the antichrist, you are lying in God’s name. Obama is a skillful liar, and even so, what you quoted is purely a factual statement. Satan knows very well that Christ conquered and attained victory on the cross over sin and death. Obama stated factually what Jesus did, in his efforts to deceive others as a false Christian. When you deceive others and say falsely the Lord told you so, you will be held to account.

Totally agree Christopher,
Obama before elected skilfully played the Christian card very well. Once elected the true Obama came to the fore including mocking Christians in one speech. The man cannot be trusted. Obama is a master of deception, manipulation and spin,
Phil

Wow!! I was going to make an addition to my comment on May 22nd but held off when typing it!. It was regarding some info I found on O. a no of years ago… I was doing a lot of research @ the time & praying to Father God.. I remember finding info on O. that he was part of a Freemasonary organisation called Prince Manly Hall F.M. lodge.
I just typed in the same and pictures came up on Pinterest..there was one picture @ the top of all the other pictures & I simply clicked on this heading: a link to Porterville post.dated Nov 29 2008

I have only added this in view of what has been mentioned in the other comments eg. Johnny

I knew Obama was a Freemason but never saw him in a pic. Excellent catch Anne.

I have been asked when America became Mystery Babylon and what evidence there is that Jimmy Carter is and was the 1st King of Mystery Babylon in Revelation 17:9-11. Roe verses Wade of 1973 introduced the sacrifice of baby’s and turned America into a Moloch worshipping nation. Moloch was the Canaanite god in the Old Testament associated with child sacrifice. President Nixon was in office in 1973 but was embroiled in the Watergate scandal in 1972 and Ford his replacement was never elected to office, the only time in American history. The weak anti-Semite Jimmy Carter takes the honor (sarc) as the 1st King to be elected to the transformed America, becoming a sodomite, baby sacrificing nation controlled by Moloch. America is mentioned in the Old Testament as the eagles wings that were plucked from the lion(England) and flew off to the far away land that we know as America today.

I was born into a family line of 33rd degree Freemasons and rejected it from childhood. I was beaten as a boy and have had several near death experiences that I attribute to this demonic cult called Freemasonry. When I see and read a post such as this I get chills down my back. I try to do careful study on people in high places to find who has allegiance to Freemasonry and their position of power. Obama is a 32 degree Freemason of the highest order. 33rd degree is more of an honorary award for this devious organization. Dr . Anthony Fauci and Bill Gates are known Freemasons but I cannot confirm it as Satan will hide the identity of his minions until it is safe to be revealed. I draw a blank with Trump at this time and do not know his history with Freemasonry except for some strange occurrences such as the large naked Trump doll a few years back that was wearing a Masonic ring. It may have been subterfuge by this dark enemy , only time will tell. When Trump was sworn in as President he was 70 years-7 months and 7 days old. That is unusual along with being the short lived King of Babylon Number 7– Rev.17:9-11. Obama being the 6th King of Babylon is of no surprise to the astute researcher where the number 6 follows him like a shadow.

Wow, thanks for sharing that amazing testimony Johnny. I’m going to be sharing some very important background info about the Freemasons in upcoming podcasts.

Hi Johnny – How terrible. ??. Faucci is a Freemason as are so many of the top people as they have been photographed with different Freemason hand signs, hand shakes, poses and/or items. The more I have learned about Freemasonry, the more disturbed I am by the sheer number of people that think they are just a group of men that get together socially. ?. Part of the reason for the sheer depth of ignorance is due to the way Freemasonry is portrayed in books & movies, always incorrectly & disguised as a type of “social fraternity”. ?

I am thankful you escaped this dreadful organization. ??

I recently listened to an ex-Mormon’s testimony. It was heartening to watch—a man brought up in the traditions of his family and ancestors and sincerely convinced that he is on the “right” path, until God meets him and sets him on the truly right path.

When I hear stories like this of God meeting people in their deceptions and delusions and setting them free from the bonds of the evil one, it does make me wonder if the people who ask questions like “What about those who have never heard?” “What about those born this/that way?” “What about this religion/that religion?” are actually seeking to be freed from their bonds or are seeking excuses to remain in their bonds without having to bother about the consequences.

I know the force of tradition. I have personally witnessed people who when confronted about their traditions against the clear Word of God have chosen to love their traditions and follow them instead of Christ. So, for me, people rejecting their ancestral traditions to follow Christ is nothing short of the miraculous and a testament to God’s power and His mercy.

May the good Lord watch over you and keep you all the days of your life, Johnny.

It is absolute depravity. nwo agenda that is and O. . ! we know that this world will be so DARK prior to our precious saviours Return to this earth as the ROARING LION OF JUDAH..& King of Kings…who does O think he is really fooling…. such wicked evil personified.

I remember a week or so ago on one news site I looked at: it had O & his wife Michelle ( Michael ?)….having a story time reading for children up on the main stream media… I was thinking I would not let children listen to them.. on one of his speaking tours to N.Z & AUST. he was quoted as saying they wanted a 1000 young B.O’S
the ones they could indoctrinate with their propoganda & lies.

parents protect what your children hear with their ears… and what they see & look at.( protecting their mind & spirit.)

I am thinking of a beautiful worship song…. Jesus he is my (our) defence we shall not be moved.