You are here: Home » News » Jesuit Agendas » Fake News/Propaganda » Americans have detached from reality, which is the definition of psychosis.

Americans suffer the same disabilities as the Europeans of 1919: They cannot think. They cannot speak plainly among themselves.

“We modern civilizations have learned to recognize that we are mortal like the others. We had heard tell of whole worlds vanished, of empires foundered … sunk to the inexplorable depths of the centuries with their gods and laws, their academies and their pure and applied sciences, their grammars, dictionaries, classics … their critics and the critics of their critics…. We could not count them. But these wrecks, after all, were of no concern of ours.”

That is Paul Valéry, the modernist poet, essayist and Academician, writing in April 1919. The Great War was but a few months over. Europe understood, if subliminally at that moment, that the world order of which it had been the center had shattered like glass. Or — better put — that Europe had shattered it.

“Everything came to Europe, and from Europe everything has come. Or almost everything,” Valéry wrote. “Now, the present situation permits of this capital question: Will Europe retain its leadership in all activities? Will Europe become what she is in reality: that is, a little cape of the Asiatic continent?” [Emphasis the author’s.]

Valéry was less interested in Europe’s wrecked landscapes and its blown-to-bits economy than he was in what had happened to European minds and spirits — how people thought and felt. Europe’s best brains had just wasted themselves “finding a way to remove barbed wire, baffle the submarines, or paralyze the flight of aeroplanes.”

Then, the war over, Europe no longer knew how to think. Europeans could not speak among themselves of their abruptly arrived new circumstances. People retreated into the classics of European culture and took to repeating the old verities as to the Continent’s ancient greatness. Valéry called the essay I quote “The Intellectual Crisis.” Its topic was “the disorder of our mental Europe.” 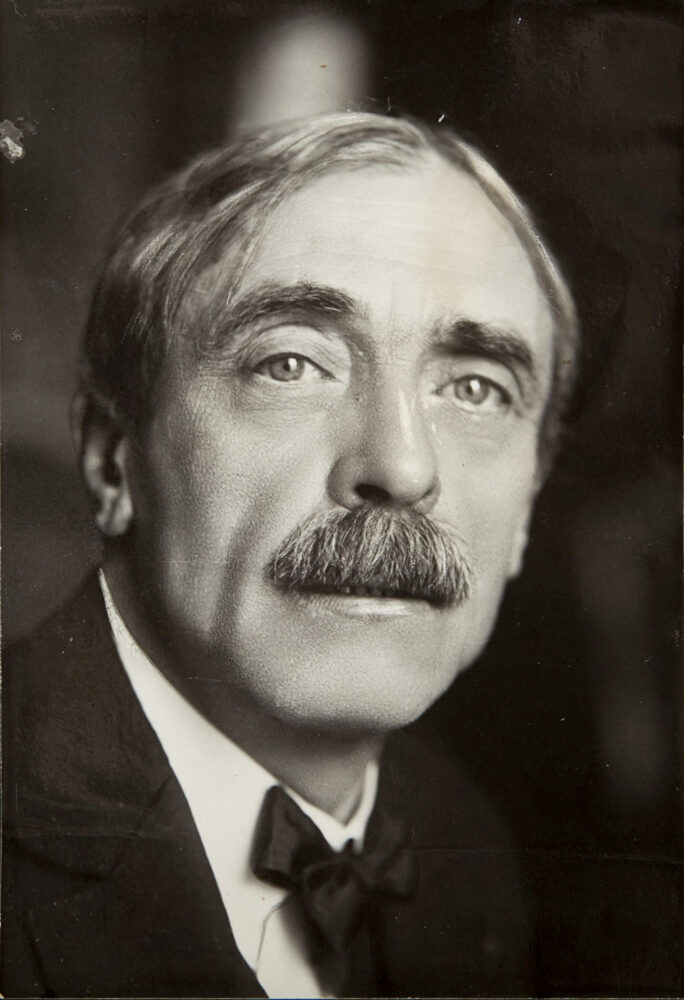 It is sobering, to put the point mildly, to sit in America in 2021 and read the reflections of a writer sitting in Paris 102 years ago. The world America made in the post–1945 years has ended just as the Great War ended the world Valéry, born in 1871, knew as his own.

And Americans suffer the same disabilities as the Europeans of 1919: They cannot think. They cannot speak plainly among themselves.

They are, in a phrase, manufacturing their own decline as they flinch from the world as it is in this, our post–American century.

Only a materially advanced civilization could have wreaked all the atrocities and destruction of World War I, Valéry observed:

“A great deal of science was doubtless required to kill so many men… but moral qualities were equally required. Knowledge and Duty: Must we suspect you also?” [Emphasis again the author’s.]

We must, say yes, to reply to Valéry a century late.

America, the most materially advanced nation in human history, has made the same error Valéry described ever since it nominated itself, in the mid–19th century, as the very incarnation of Progress with a capital P. It has by a long tradition mistaken material progress for authentic human progress.

As to the latter, America has made little as measured by the lives Americans now live. And now, as the world it sought to make in its image goes its own way, America finds itself a desperate empire with no moral qualities to speak of as measured by its conduct. Caught up in a great game of pretend, it now has its very own “intellectual crisis.”

Three cases, of the countless number available to us, merit our consideration for their proximity. In each, we must note not merely what America did or did not do; taking a page from Valéry, we must also think about the deeper consequences for all Americans of their nation’s doing or not doing.

Last week the Royal Courts of Justice in London resumed proceedings in the Julian Assange case and heard American arguments to overturn the ruling earlier this year that Britain should not extradite Assange to the U.S. out of concern for his mental state and the U.S. record for mistreating prisoners in “supermax” prisons. The legal irregularities that have featured in these proceedings from the first were again in evidence.

It is perfectly clear to anyone who looks squarely at this case that Assange faces up to 175 years in prison for revealing American and allied war crimes in Afghanistan and Iraq in the post–2001 period. As Chris Hedges wrote last week, “If Assange is extradited and found guilty of publishing classified material, it will set a legal precedent that will effectively end national security reporting, allowing the government to use the Espionage Act to charge any reporter who possesses classified documents, and any whistleblower who leaks classified information.”

What is at issue in London is plain. The headline on the Hedges piece says it better than I can: “The Most Vital Battle for Press Freedom in Our Time.”

Assange’s treatment in Belmarsh prison for the past two and a half years has been properly termed torture. I would also call it a human-rights atrocity. This, too, is plain.

And what are most Americans thinking and saying about Julian Assange’s fate? What is the press, whose principles and professional practice are at stake, saying and doing? Most Americans know little to nothing of the Assange case. Apart from independent media, the press cannot write of it due to its diseased relationship to power.

This inflicts damage of a kind not adequately considered. It is the harm done by ignorance and silence — a self-inflicted harm. A society that cannot address a crisis in its press such as America has faced for some years now is doomed to proceed without a free press. It is paralyzed to act in its own interest. 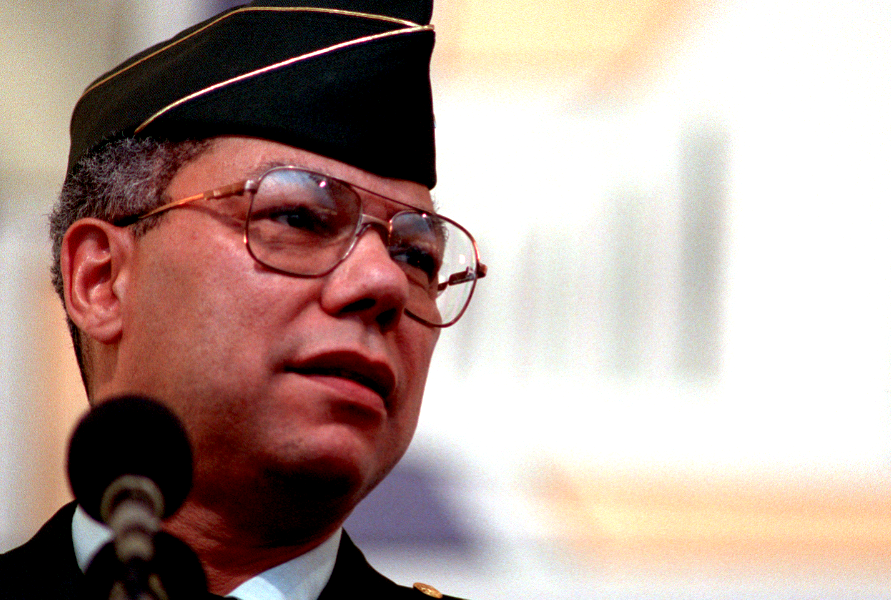 Colin Powell while serving as chairman of the Joint Chiefs of Staff, 1991. (National Archives)

Then there is the Colin Powell case. One knew as soon as Powell’s death was announced that Americans were in for days upon days of praise for a patriot, a hero, a brave warrior, a great statesman, a great American, and all the rest. I kept my radio resolutely turned to a classical station until I figured the coast was clear.

Of Powell’s famous lie at the U.N. as to the presence of weapons of mass destruction in Iraq — the most consequential lie so far told in this century — the corporate press said as little as it could get away with, and what it said was whitewash. Of his torching of Vietnamese villages, his post–My Lai cover-ups, his roles in the Iran–Contra scandal and the flagrantly illegal invasion of Panama in 1989, and other such pockmarks on Powell’s record — of these nothing.

Do Americans think there is no price to pay for this kind of self-deception? The price exacted is evident out our windows: It is our continued defense of empire and the consequences at home as measured by our increasing deprivations, our political collapse, and our social decay. Powell was a centurion in the imperial army. To glorify him is to preclude all action against America’s imperial aggressions — to sustain it, this is to say, on its ruinous path.

There is the Antony Blinken case. Tiresome as it is, have you taken the trouble to follow his Twitter messages?

If you want to understand his record as secretary of state you must, because all he seems to do is Tweet utterly ridiculous bromides as to America’s respect for human rights, the right of others to self-determination, and press freedom along with his deep concern for starving Syrian children — children whose malnutrition is the direct result of sanctions Blinken maintains against the Syrian Arab Republic. There is always, of course, Blinken’s idolatry in the matter of “the international rules-based order.”

Blinken is not the worst secretary of state in my lifetime — that distinction goes to John Foster Dulles. But he is the most ineffectual, and possibly the stupidest. His function is to portray, to put across, carefully, a nonexistent America.

Again, it is the consequences of America’s chief diplomat advancing this Disneyesque version of what America stands for and does that must concern us. No one in corporate media calls Blinken on all his silliness: They pretend the world according to Blinken is just as he says it is. There are consequences there, too. The unlawful, often atrocious conduct abroad continues in the name of people who do not even know it is occurring.

What Comes Into View

These three cases appear at first to have nothing in common. If we consider them together — and one could add very many others — what do we see?

I see a nation that is detached from reality (which is a basic definition of psychosis) such that its people are confined to a series of simulations:

In the years after Valéry published “The Intellectual Crisis,” Europe drifted almost dreamlike into fascism, genocide and another war. He seems to suggest, without quite saying so, that Europeans had rendered themselves powerless to act as they drew back from what they had made of themselves. The piece was later retranslated as “The Crisis of the Mind.”

America’s crises today are numerous. It seems it is America’s crisis of the mind that causes the crises to multiply and worsen and stand without solutions. These are available to us in every single case whenever we are ready to… to make up our minds to speak of our crises and then to address them seriously, with determination and without dreams.

Originally published by consortiumnews.com and republished by Strategic Culture Foundation.

The Strategic Culture Foundation provides a platform for exclusive analysis, research and policy comment on Eurasian and global affairs. We cover political, economic, social and security issues worldwide. Since 2005, their journal has published thousands of analytical briefs and commentaries with the unique perspective of independent contributors. SCF works to broaden and diversify expert discussion by focusing on hidden aspects of international politics and unconventional thinking.