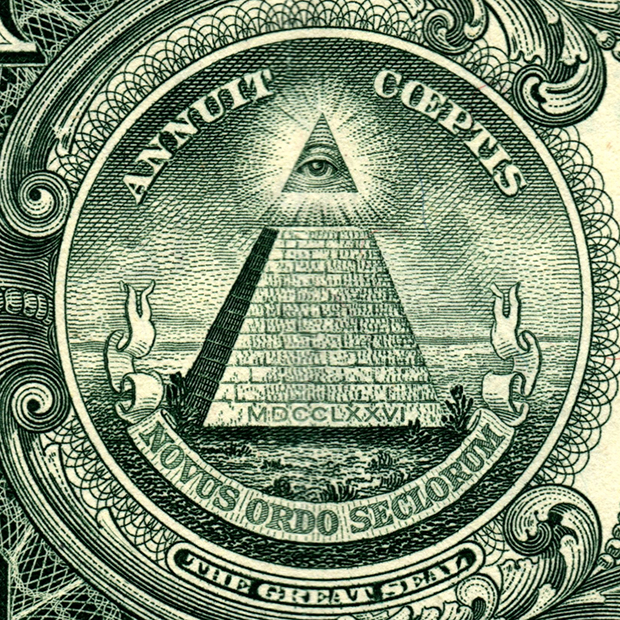 The all-seeing eye of Horus that appears on the back of the United States one dollar bill is now being rolled out over major U.S. cities. For example, in 2016, a Cessna surveillance aircraft began recording the movements of people and vehicles in Baltimore MD, recording 32 square miles of the city at any given moment, but the Baltimore police department was forced to stop the program due to protests from citizens concerned with government abuses of our privacy. Now it is being resurrected with the help of funding from Maryland Governor Larry Hogan.

Gov. Larry Hogan on Tuesday pledged $21 million to help fight crime in Baltimore and endorsed the use of a controversial surveillance plane to fly over the city recording.

“You have inherited a difficult situation, but now is the time to show the people of the city that we are all serious about stopping this deadly violence and getting shooters off of the streets,” Hogan, a Republican, wrote to Young, a Democrat. (Source: baltimoresun.com)

David Rocah, a senior staff attorney of the American Civil Liberties Union of Maryland, warned against a return to using the surveillance system.

“Governor Hogan is as wrong and misguided as Ross McNutt,” Rocah said. “His endorsement of it demonstrates the contempt with which he holds the residents of Baltimore, who are the ones who will have a virtual police officer following their every movement ― not the governor.”

As always, efforts to expand government surveillance of American citizens is justified with claims that the only purpose is to catch bad guys and protect innocent citizens. It’s the same justification used for launching the unending global “war on terror” in 2001 following the false flag events on 9/11, which were orchestrated by our own federal government. Instead of fighting terror, the campaign has terrorized and killed innocent citizens all around the world, mostly through drone strikes, and continues today with no end in sight. It was also the justification used for building a nationwide network of fusion centers with one in every state and territory of the United States, equipped with high tech surveillance systems for continual spying on American citizens, watching us and listening to our conversations through our electronic devices. So, it’s hard to believe the surveillance planes truly have our best interests in mind.

Programs like this are hard for local police departments to resist because of the bribe money that always comes with it, which is how harlotry spreads through our land, bringing our government officials into submission to the will of the mother of all harlots, the whore of Babylon, who already has a firm grip on our nation, but continually goes forth conquering, seeking more power and control by recruiting more harlots. Sadly, she finds many who are willing to betray their fellow citizens to enrich and empower themselves. (Revelation 6:1-2, 17:5-6)

These events are not new, just as the eye of Horus has been displayed on the dollar bill since the 1930’s. And it goes back much further than that, as the harlot of Babylon has been actively pursuing her ultimate goal for thousands of years, which has nothing to do with our security, but with her getting drunk with the blood of the saints.

5 And on her forehead a name was written: MYSTERY, BABYLON THE GREAT, THE MOTHER OF HARLOTS AND OF THE ABOMINATIONS OF THE EARTH.
6 I saw the woman, drunk with the blood of the saints and with the blood of the martyrs of Jesus. And when I saw her, I marveled with great amazement. (Revelation 17:5-6 NKJV)

Yes : just last night was a program titled Current Affair.. & they mentioned the increase of BIG BROTHER SURVEILLANCE GETTING WORSE IN CITIES IN AUST. ESPECIALLY SYDNEY & MELB. FACIAL RECOGNITION..ETC social credit system like China… Can pick up even if someone jay walks..

In contrast a community of people have set themselves up off grid in country areas & because of the surveillance ( Big Brother ) would not move back to the cities. They have their own solar energy also. In their late 60’s

The Global Agenda is to have Smart Cities & Communities…& they will include local councils in this program to set up these smart cities. Design & rollout of the same.

Makes me wonder when our streets of America will have surveillance comparable to London and their CCTV system? China is set to have hundreds of thousands of these cameras in place by 2025 or so. Along with their social credit system, China truly embraces the Big Brother cult of control. We aren’t far behind, sadly, as local police departments already use “leftover” military hardware. Never understood why small town America needs local police rolling down mainstream in a military tank. Our freedoms and liberties are being whittled down further. Will the majority notice before it is too late?

Fear not, God always has a solution by giving us witty inventions: https://www.reflectacles.com/ghost