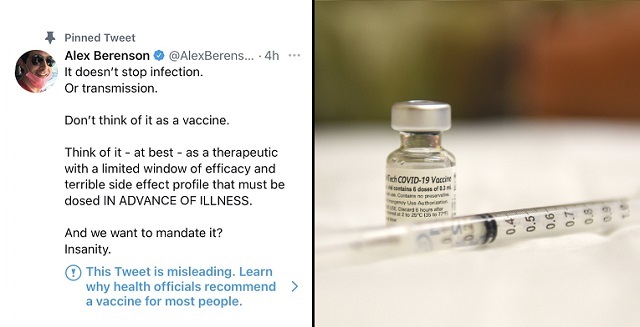 “This was the tweet that did it,” Berenson said on his Substack. “Entirely accurate. I can’t wait to hear what a jury will make of this.”

“It doesn’t stop infection. Or transmission. Don’t think of it as a vaccine,” Berenson’s tweet said.

“Think of it — at best — as a therapeutic with a limited window of efficacy and terrible side effect profile that must be dosed IN ADVANCE OF ILLNESS,” he continued. “And we want to mandate it? Insanity.”

Everything he said about it not stopping infection or transmission is straight out CDC Director Rochelle Walensky’s mouth (though she claimed just the opposite a few months ago).

CDC Director Dr. Rochelle Walensky: “Our data from the CDC today suggest that vaccinated people do not carry the virus.” pic.twitter.com/9W1SHecSEm

“Our vaccines are working exceptionally well,” CDC Director Dr. Rochelle Walensky tells @wolfblitzer. “They continue to work well for Delta, with regard to severe illness and death – they prevent it. But what they can’t do anymore is prevent transmission.” pic.twitter.com/s83YyBQqeh

The CDC even admitted efficacy was waning and is now pushing for booster shots (potentially every 5 months) despite no complete trials on their efficacy or side effect profile:

C.D.C. Director Rochelle Walensky claims there’s a new scientific data term called -”hope.” It’s remarkable! She looks frightened. This is NOT ACCEPTABLE!!! There are no efficacy or safety studies on 3rd dose and the FDA & Vax Advisory Committee haven’t even looked at the booster pic.twitter.com/AJZR5bYpQ4

WH wants boosters for all adults on Sept 20 because of Delta variant…CDC has hope, no data. pic.twitter.com/5HHYopXlzz

It’s worth taking a look back at how Democrats were allowed to trash the experimental injections back when Trump was still president.

So just 9 months ago Biden & the Democrats were saying they would NOT take the vaccine & didn’t trust it… what changed? & why are they now forcing people who have the same reservation THEY were allowed to have 9 months ago, to take it? pic.twitter.com/ASflZ1KsCp

Now, folks like Berenson and others are getting banned for simply citing governments’ own data from highly-vaxxed countries showing all our hesitancy was entirely warranted.

We’re witnessing the merger of state and corporate power into one unifying regime seeking to crush the American people and bring them under their total submission.