You are here: Home » News » Jesuit Controlled Organizations » Al Qaeda » Al Qaeda is in the Country and Obama Knows They are Here
Share this post: 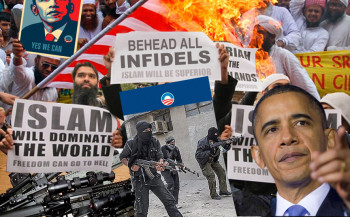 This message was posted on the Watchman on the Wall Report on April 23 2013.

About two nights ago, the Lord gave me a dream where he was speaking directly to me. He said; “Al Qaeda is here in the country.”

The Lord continued; “Al Qaeda is in the country, and Obama knows that they are here. They are keeping a low-key and not wanting to draw attention to themselves. I will show you where they are in hiding.”

And with that, the Lord began to show me places throughout the country where they were stationed. I saw small businesses, beauty supply stores, local groceries, and small shops.

Then the Lord said; “Tell the people that a war event is coming  to the coastline of this country.”

And with that, I woke up.

Four nights later, He returned to me again with the same thing. The Lord told me to study the book of Zephaniah as a reference on what is to come. He also informed me that the fourth month would be significant.

Note: This word was received during the fourth month (April).

A ‘must watch’ for every civilised human being who respects his/her own culture and tradition.
The ultimate destroyer of civilisation will be Islamic Shariah. Just look at the population growth numbers. It is amazing.

It may be too late for most of Europe and the U.K, but it’s not too late for the U.S.A., Canada, Australia and New Zealand.
Best regards, Philip

Theory – Roseburg shooter really a Muslim op, but gov wanted to put a lid on it so others would not be inspired to do the same as the gunman. So everything were being told is a lie??? Also smeared the sheriff on the news to keep him quiet…..hmmmm

Dennis Manning…where in scripture did Jesus tell His disciples to “buy a sword for self-defense”? The only place I know of is while Jesus was with them and the swords were NOT FOR SELF-DEFENSE, it was to FULFILL SCRIPTURE. [[[ 35 And He said to them, “ When I sent you without money bag, knapsack, and sandals, did you lack anything?”
So they said, “Nothing.”
36 Then He said to them, “ But now, he who has a money bag, let him take it, and likewise a knapsack; and he who has no sword, let him sell his garment and buy one. 37 For I say to you that this which is written must still be accomplished in Me: ‘And He was numbered with the transgressors. ’ For the things concerning Me have an end.”
38 So they said, “Lord, look, here are two swords.”
And He said to them, “ It is enough
(Luke 22:35-38 NKJV) ]]]
Verse 37 speaks of the fulfillment of scripture. If they were to use those swords for self-defense, why stop at just 2 swords? There were 11 of them. This would mean that 9 of them would be defenseless. DENNIS, you are mistaken. My own brother, a pastor, was also deceived into thinking as you. Didn’t Jesus say, “if you try to save your life, you will lose it”? Having a weapon for self-defense IS an attempt at saving your life. Don’t you know that you are encouraging others to lose their lives by acting out of FEAR and not FAITH. You cannot take something in the Word of God and pull it out of its CONTEXT. This is where false doctrines originate where seducing spirits TWIST the scriptures to mean what they want it to mean and not as it was written or spoken.
SO, SHOW US WHERE JESUS SAID THOSE THINGS AFTER HE DIED.
(ALL CAPS is for emphasis as italics and bold is not available…I am not shouting)

Saints use swords (guns) for just war, and self-defense………saints do not use swords(guns) for unjust war and sinful assault on others……….If an intruder broke into my home, I should use my gun to protect my family, guests, and house-church……..But if a man challenges me to dis-own Christ or die, i choose death(matyrdom is Christian witness)……….Paul said that govt+army+police are necessary+good, and they are instruments of God for righteousness (read Romans). When an intruder breaks into my home, I act as the police when the police have not arrived yet…….but in these endtimes, americans (as a whole ) have outlawed self-defense. So I might choose death over self-defense, since I dont want to be in prison.

Good morning Jerry, I need to state my disagreement with you on your response to Dennis concerning this quoted scripture, “36 Then He said to them, “ But now, he who has a money bag, let him take it, and likewise a knapsack; and he who has no sword, let him sell his garment and buy one”. I believe sincerely that I have the witness of the Holy Spirit that with this statement our Lord Jesus is validating the position that it is indeed righteous in His eyes to defend family when attacked. In the days immediately before us we may well see sporadic attacks in this United States, both in secular institutions as well as meeting places of the Redeemed. I passionately hope that there will be righteous men, and women, who are armed and willing to take these evil ones out quickly and honestly and completely believe that this is pleasing in the eyes of Him who was quoted above.

Hello, brothers and sisters. I am confused on the date of Mena’s post being April 23, 2013 and how it is being brought forth now — has something additional happened in Mena’s vision, or been renewed? I may be reading it incorrectly, but I’m not understanding the new significance. Not that it ISN’T significant since April 2013, but overall, what’s causing it to come forward again at this time? Thank you in the name of Jesus.

Her prophetic warning about the fourth month has not yet been fulfilled. So it is still relevant for us today.

In Judaism, Nissan 1 is the new year for the purpose of counting the REIGN OF KINGS and MONTHS on the calendar. Nissan 1 in 2016 is April 9th. Might there be a connection to Rev 13:5 where it states the antichrist is given power to continue forty & two MONTHS?
Another significant event, on Sept 29th our Attorney General, Loretta Lynch joined up with mayors from major cities throughout the United States to join these cities & their police force with a Global Police force through the UN Agenda 2030. Supposed to go into effect next April when they meet in Paris.

The OT is the foreshadow of the NT. The OT was physical. The NT is Spiritual. The OT lamb is the shadow of the NT Lamb of God (Jesus). Colossians 2;16. God called OT Babylon to destroy wicked Israel+Temple. The Babylonian Captivity cured Israel of idolatry (sun-worship, Bel, Moloch, etc). Similarly, the endtimes wicked Church will be destroyed by NT Babylon, and NT Babylon will hold the world Captive for 7 years in the Trib (Daniel’s 70th week). This NT Captivity will cure the NT Church of it’s heresies and wickedness. It will take the abominations of the Trib to convert the Jews and the wicked Church to Christ. Some people will join NT Babylon and be lost forever. Some people will repent and believe on Christ. NT Babylon is the spiritual world-wide system-kingdom of opposition to God, just as, OT Babylon was the physical Kingdom-empire, famous for destroying God’s nation+Temple. Nebuchadnezzar was the “King of kings” (foreshadow of the a/c). NT saints should not do physical warfare against NT Babylon, but we should do Spiritual warfare against the spiritual enemies (demons, babylon, sin) (Luke 9;1)….. http://www.theelijahchallenge.org….www.demonbuster.com……God has called NT Babylon to destroy the wicked church, but God will Judge the babylonians for their unbelief and evil, just as God judged (destroyed) OT Babylon, ,,,,,,OT Babylon will never rise again…….When Jesus Returns, NT Babylon will fall (Rev 18), never to rise again……………..Before Jesus died, the disciples carried no wallet, money, food, sword,,,,and they didnt fast,,,,,But after Jesus died, Jesus told them to work a job to make make a living, and buy a sword for self-defence.Saints sold their lands to buy food for the poor. Jesus said that the saints would fast after His Death. It was a different dispensation after Jesus died……….. NT Babylon wants GUN CONTROL so that they can murder the saints, Israel, Bible, etc………..today, in the usa, self-defence has been outlawed…….if you defend yourself, you will be arrested and imprisoned.

Dennis, I don’t get your point about the disciples lifestyle before JC died and after. Are you able to clarify?

BEFORE JC died, Jesus sent the disciples out to minister, but they were protected from attack (no sword), they didnt carry money (somebody would feed them), they didnt fast (the Bride was with the Bridegroom), ,,,,,,,But AFTER JC died, the saints had swords (for self defense), they sold their lands to buy food (they couldnt depend on others for provision), they fasted (the Bride was separated from the Bridegroom), they worked a job to make money(they settled down to an ordinary life)……………We cant do EVERYTHING EXACTLY like the 4 Gospels , because Jesus made changes when He left us….. I work a job, I have a weapon(shotgun for intruders+bears), I (should) fast, ………..I am showing that the dispensation changed when Jesus left us…………The dispensation changes again when the age of gentiles is completed, and the Daniels 70th week begins?………or perhaps at mid-Trib, when the Rev12 woman (the church) goes to the wilderness?……… (I think).

all should be prepared to defend your home and family and work with others in your communities – the best areas are those where people are prepared and not afraid to defend themselves- this govt is not for the people – it is with the banksters and plan to take this country down if they can do it – there will be more shootings and more calls for us to disarm – of course the criminals do not want you to be able to resist them – of course not – this is a total sell out of a govt – I hope people realize that – too many are still asleep. I believe in prayer and the courage to stand against the evil –

Hi Mena, I just want to thank you for posting this today. I have been looking for a second confirmation to Dr. Patricia Green’s prophecy about the sun, and about how she wrote “look to the skies and you will see the first devastation”. Because you posted this, I went to your “Watchman on the Wall” page and looked at some of the prophecies from 2013, before finding the one you posted here. On September 10, 2013, you had a vision of a CME. This is not only confirmation of what Dr. Green saw, but it confirms to me what the Lord has been speaking to me about these last few days.

http://www.godlikeproductions.com/forum1/message2973258/pg1…………the recent shooter at the oregon community college ,,,,,,,,,,,,he was a white man, a muslim, who hated Christians…………CNN hacked into the accounts and changed his profile to deceive the public………CNN does NOT want you to know that he was muslim,,,,,,,,CNN wants you to think he was a white person……..so you will hate white people………”white, american, patriot, conservative, Republican, tea party, etc”,,,,these are codewords for CHRISTIAN…….the world hates Christians in these endtimes………..dont believe anything that the mean-stream media says