To save our world from implosion, we will need the wisdom of God infusing every human organization that oversees essential issues of society. When mainstream organizations become atheistic in their core values, their leadership turns to destructive evolutionary principles to govern the affairs of life. These principles are ruthless, and there is no mercy in them – certainly no liberty. If you watch the headlines from a mainstream news app, you can’t help see the daily unexplained death of many famous people who are in the prime of their life. The mainstream media has done their part to blind you and hope you won’t question the “vaccines” as the cause at this point.

We pray for these evil systems to be torn down and truthful oversight and news media to replace them. We already have a solid independent press that has emerged. We have seen doctors, lawyers, and former military leaders standing for truth, regardless of the abuse they had to take for this. These are the leaders of a still hopeful future that we will hold in high honor. Likewise, independent agencies like America’s Front Line Doctors and everyone who has spoken out against the wicked jab should be held in recognition for their willingness to push information across the barriers in the news and social media systems.

The jab is Satan’s centerpiece for controlling people and bringing about a Satanic global order. We are already living in an unprecedented era. However, it is unfortunate that many people still hold onto old nostalgic ways of viewing the “good” old USA with simple fantasy patriotism. Being aware of evil is required of every human being. We literally won’t survive without Holy Spirit-led leaders in every area of modern life. The potential for unseen evil beings to oppress and even potentially possess people is more likely now because of the ways they have already modified us – yes, they have! Decades of vaccines, high altitude spraying, and Glyphosate (the Round-Up chemical) getting sprayed on GMO corn and sugar has broken down the brain’s created barrier systems and made us more permeable to unseen spirit-being influence. A demon can plant thoughts in our minds and mess with our male and female identities. Wifi and microwave signals also penetrate our minds and cause additional problems. Many airlines have refused to fly into areas where 5G was suddenly turned on this past week – see Airlines scramble to cancel flights. There have also been prophetic words that have warned of 5G causing distress and hysteria in vaccinated people.

One of the most Spirit-led leaders in the medical field is Dr. Carrie Madej. She has emphasized that our current culture of blindly accepting any and everything put out by the government must come to an end. We must be responsible for validating anything anyone wants to inject into our bodies. She points out that many cutting-edge drugs are using unethical development, including Monoclonal Antibodies, which rely on aborted babies and chimera, human-mouse DNA. We have to network with like-minded people to improve our ability to judge things we are told to do. We must add independent news sources to our ever-growing list of trusted advisors as we find them – see Forbidden Knowledge TV

We live in a world where truth is something you must seek to prove, and lies are constantly spread around us that we must avoid. Therefore, I believe our need for independent agencies and news investigators to monitor the government will only grow. We need more independent watchdog organizations filing FOIA requests and lawsuits. Thank God for the critical role Judicial Watch and ACLJ are fulfilling. These brave lawyers and doctors will be needed as essential representatives of truth because no one will want to trust a government spokesperson without an investigation for a very long time. The doctors who came to the forefront to help us understand what was going on with the COVID vaccines are the ones we need to carry on the work of judging the aspirations of drug companies. We can’t let private, or public agencies hide behind a mainstream media curtain that insists that the top-down agencies are the only experts. We pray that Christian ministers would not allow predators to lurk unchallenged in their flock’s information networks.

Here is a quote from an email by Dr. Simone Gold, MD, JD, of America’s Front Line Doctors:

“In law school, we learn that the precedent of our decisions is even more important than the present impact of our decision. We can no longer focus on just the consequences in the present. The same Big Pharma corporations whom the media and the government are presenting as our saviors have paid over $50 billion in fines to the American people. Pfizer has paid out the largest criminal fine in US history: $2.3 billion in just one case. In fact, the pharmaceutical industry has been assessed 944 fines totaling $56 billion.”

And finally, when we hear of tragic reports such as Dr. Domenico Biscardi being found dead in his home after announcing that he found evidence of nanotechnology in the Covid vaccines, our hearts break. One good person doing good in this world is worth so much, and the loss of such a good person is a heartbreaking crime to those who have followed the pattern of doctors and scientists who have lived openly about their opposition to government policy and have mysteriously lost their lives. Heavenly Father, we ask you to rid the world of such evil; in Jesus’ name, we pray.

David Keas grew up on the Central Coast of California in a little town called Los Osos. After graduating from San Jose State in 1983, he went into the Navy and spent most of his 15 years there doing aviation maintenance management which gave him the opportunity to design administrative and operational processes, which he enjoys. His last 20 years have been spent doing various different things with software and construction. He is drawn towards supporting government leaders in developing public policy. Visit his personal blog at davidkeas.com.

“Satan On The United States Dollar”

The Masonic Seal Of America!

‘In God We Trust’ – their god, is the god of this world… satan

This is the Great Seal of the United States of America. It was designed by the Freemasons and contains a mass of symbolism that the profane (non masons) are not to understand. This article will once and for all prove that the Seal is a Masonic design. Have you ever asked the question “Why is there a Pyramid on our $1 note?” The religion of Freemasonry and some of it’s mysteries have descended from ancient Babylon whose mysteries descended from ancient Egypt. The Great Pyramid has of old been a fascination of Freemasons. It is a pagan temple of Satan worship.

… the Latin words on the seal. ‘Annuit Coeptis’ means ‘Announcing The Birth Of’ and ‘Novus Ordo Seclorum’ means ‘New World Order’. So therefore it says ‘Announcing the birth of the New World Order’. The date in roman numerals is 1776, the year the modern Illuminati was formed and also the year of American independence. The Latin ‘E Pluribus Unum’ means ‘One out of many’ (that is, order out of chaos) which is the foundation of the New World Order’s plan to unify the world’s governments, religions and money systems into one so the world can be controlled. WHY THE ANTICHRIST MUST COME SOON!!!

How The Great Pyramid Ended Up On The U.S. Dollar

The New World Order is an expression that has been used by illuminized Freemasonry since the days of Weishaupt to signify the coming world government. “It is necessary to establish a universal regime over the whole world,” Weishaupt had said. (Writings of the Illuminati, 1780)

During the first part of the 20th century and up to the time the reverse of the seal was first used, a series of victories over the sovereignty of the United States had already been won. Illuminist agents committed to the one-world interests of the Rothschild-Warburg-Rockefeller cartel had accomplished some important stepping stones to this New World Order: Federal Reserve System (1913); League of Nations (1920); Royal Institute of International Affairs, and Council on Foreign Relations (1920-21); and the Stock Market Crash of 1929. The consolidation of power was complete and the reverse side of the seal, which remained largely unknown to the American people for more than 150 years, could now be placed. 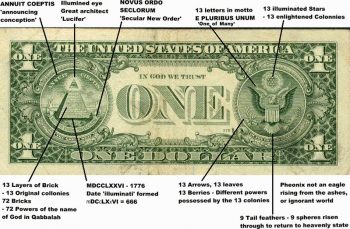 Ephesians 6:12 – “For we wrestle not against flesh and blood, but against principalities, against powers, against the rulers of the darkness of this world, against spiritual wickedness in high places.”