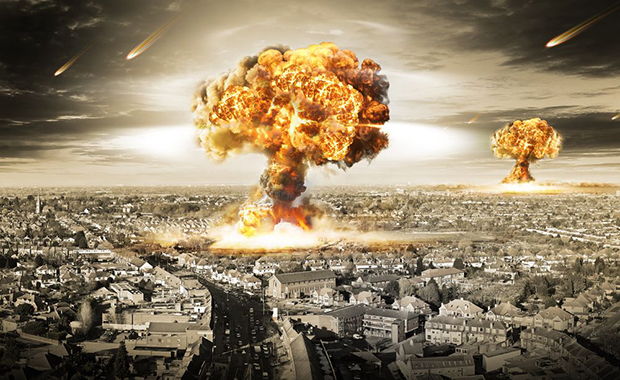 On December 13, 2017, I had a prophetic vision about an invasion of the USA by Russia and China and World War III.

The vision started like this. I was in a room with a table before me. I could hear talking about nuclear war starting, and it had to do with the USA. I had the knowing that it was going to be a war all over the world, I knew it would be World War III.

But first, something happened to America. It was either a natural disaster or perhaps a false flag, but it felt very evil and it affected the whole nation. There were a lot of people dead and injured.  There was civil war, or a revolution. the nation was in chaos and America was already weak.

Then I saw a world map on the table where I saw the USA, Russia and China. As I was hearing all the talking in the background coming from different cities in America, I had the knowing that the east coast and west coast of the United States were attacked.

I did my own map and circled on a piece of paper, very strong around the word “USA” and right next to it, I strongly circled the USSR. I didn’t write Russia, I wrote and circled USSR. I circled both USA and USSR to indicate that Russia was invading America by nuclear war.

There was a lot of talk in the background coming from all over the nation. I heard government agencies talking and they couldn’t deal with all the issues going on at once.

The nation was in darkness, possibly caused by an EMP nuclear attack wiping out our power grid. There was a lot of commotion and confusion with perplexity. I had the knowing there was Martial Law.

Russia had attacked first. Missiles were launched from Russia and then China attacked. I had a knowing that both nations were in on it.

I also had a knowing there was something else, a secret area where they had missiles and bombs. It was a stealth operation. That’s the word that kept playing in my mind, “This is a stealth operation.” Unseen, unknown, no one knew where the bombs were, but I could see they were coming from China.

It was a secret because it wasn’t a known place to the world that they had already set up all the missiles ready for launching. People were not expecting the missiles were coming from there.

I had the knowing there were stealth technologies as well as hidden locations, unknown locations where they already have nuclear missiles ready to launch when they are ready. Then I woke up.

May the Lord bless you in Jesus Name!

I share more details about my vision in this one-hour video:

https://www.handofhelp.com/vision_2p5.php
At last we were over Fullerton where we now live. “You can go home,” the angel said, “but I want to tell you what will happen. You have seen a number of cities. The day will come when I will punish the citizens of those cities because of their sins. Their sin has reached into heaven. God will punish them just as he punished Sodom and Gomorrah.”

“How will this happen? Surely they are able to defend themselves against any imaginable invasion.”

“That is your opinion, not the mind of God. The Russian government will have all the information regarding the whereabouts of American missiles. They will have the exact locations of the weapons factories. Even now they are preparing an attack against America. When America believes there is peace and safety, the RUSSIANS will lead an all out attack. They already have it planned! They plan to attack from such remote bases as Cuba, Nicaragua, Central America, Mexico, and the ocean. They have had these plans for a long Nevertheless, the day will come when America will be punished for her sins by fire.”

Russia is sending military assets to Nicaragua…in the news this week.

Just for humanitarian purposes of course. Definitely not situating hypersonic nukes for the fulfillment of prophecy

I also was given a vision of a military strike on America. In my vision I was given the knowledge that Russia was the main player in the attack. The Russian strike was lighting fast and deadly accurate. They destroyed our military and all of our defenses. We did not have a chance to retaliate. We were defenseless.

Thanks for sharing this confirmation.

Yes I have read Demitri Dudemans visions,especially the one re “America”‘ .Monique is talking about in this video ..I quoted Demitri Dudeman and what he said/saw in vision in another post under comments..I read his visions on his website Hands of Help Ministries. .I mentioned the same thing commenting re post:March 14.2018…. Man of Lawlessness leading the charge against California because I could see a few connections re civil war & internal problems that Demitri Dudemen mentioned..this is all so confirming. Praise The Lord for his confirmations & warnings.

Sister Christine I have been studying prophecy & prophets since at least 1988 . I can find where most prophets have missed it a least once , not Duduman’s words , it is happening just as Duduman was shown to the T . Blessings

America told God He wasn’t needed… or wanted. Shields down.

Hi, I am not bible scholar, but God gave me the answers to Revelations as I researched China years ago only a lot of Christians fail to see the truth. You are right in your visions, China is the Dragon, America is the prostitute that is burned by fire for an hour as revelations states. The beast, the feet of the bear (Russia) the body of the leopard (iran) and the mouth of the Lion (india) has risen as Revelations speaks of also. All countries animal symbols, the Leopard is the Persian leopard aka Iran nowdays. please send me an email as I believe God gave you these visions and would like to discuss more in private about what is to come. Tasmania will be the final place standing , hells gates, before the armies surround Israel when Jesus returns to vanquish them all with a wall of fire

I guess I better keep my Chinese Yuan’s and probably should invest in Russian Rubles.