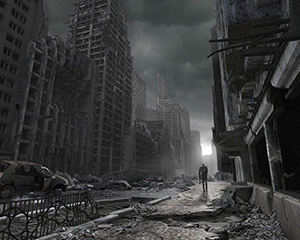 We are living in an unprecedented time. The Internet and computer technology have connected global markets unlike any time in history. Traders across the globe react within seconds to news coming from every part of the world.

So when I received an email from James Jansen sharing his dream about a coming world collapse, it seemed to fit perfectly into the scenario that now lies ahead of us. James has been a Christian for 30 years and is on the prayer room staff at IHOP in Kansas City. The following are the details of his dream:

About 10 minutes after I woke up the morning of 8/15/2012, the recollection of a brief dream came back to me. In the dream I was standing before an old TV set and on it were the words “World Collapse” with the numbers 117 at the bottom of the screen. The numbers could have been 1117. That’s it.

I think it’s a date. Either Nov 7, Nov 17 or Jan 17. The dream was very vivid but I don’t remember seeing dashes in between the numbers. At first I thought it was like a stock market ticker number, but it being a date makes more sense. I’ve been sensing the Spirit telling me 11/7 is what it meant.

Also, I had another dream last night. I’m not sure if it was just for me or for others who are preparing both spiritually and physically for the rough times ahead. It was short, but encouraging.

My wife, my daughter and myself were walking up this road, or path and it was like a canyon with steep banks on both sides. All of a sudden we saw a torrent of water rushing down the canyon toward us. It was a massive wall of water and we faced certain death if we stayed where we were. I quickly picked up my daughter and pushed her up the hill, then I climbed up the bank and reached down and grabbed my wife’s hand and pulled her up to safety just before the water rushed by. It was a close call, but we made it to safety.

I felt God was telling me that we were going to survive whatever is coming, as well as others who are earnestly seeking the Lord and preparing both spiritually and practically.

A prudent person foresees danger and takes precautions. The simpleton goes blindly on and suffers the consequences. (Proverbs 22:3 and 27:12 NLT)

Consider what would happen in a global economic collapse. In addition to major domestic problems such as riots, famines, and looting, there would also be major international problems. Sovereign debt levels are higher today than at any time in history, which means countries are more dependent than ever before on what happens outside of their borders. Countries are indebted to other countries who have purchased their government bonds. Would the Chinese forgive the $1.2 trillion debt owed to them by the United States simply because we have come upon hard times? Not likely. That is just one example of the pressure caused by a world economic collapse.

In addition, multinational corporations have invested great wealth outside of their home country’s borders. Investment banks and global investors have done the same. A world economic collapse puts all of this wealth at risk. As each of these players would maneuver to protect their wealth. They would place increasing demands on government leaders to take actions against other nations. The increased financial friction would be a catalyst for war, possibly even world war. We are facing very dangerous days ahead.

These are God-sized problems, beyond human ability to fix. The good news is none of these problems are too big for God. God hears our prayers. They give Him our permission to intervene in the earth. The Bible says, “The heavens are the heavens of the Lord, but the earth He has given to the sons of men” (Psalm 115:16). He gave us dominion over the earth, so if we want God’s help, we must pray that God’s will be done on earth as it is in heaven.

© 2013 – 2016, Z3 News. The first 200 words of Z3 News articles may be shared online in exchange for a clickable link to our site. Please include the author name and do not make any changes to text or titles. No image files from our site may be shared because we don’t own them. For permission to use our content in other formats, please contact us.