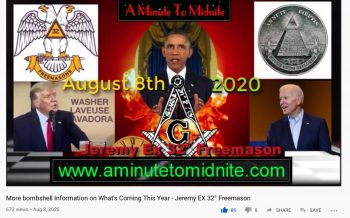 Youtube Channel, aminutetomidnite, shares information from Jeremy, an ex-32 Degree Freemason. Take this information prayerfully to God & to show you what steps you should take.

Things will change dramatically….everything more than ever….you can not prepare for what is coming

God telling Jeremy, “Do not fear” & he believes God will do supernatural things like help people supernaturally receive food and/or medicine

Lockdowns were done to take rights away from people & gauge people’s response. Lockdowns were met with minimal resistance so everything “coming faster now”.

Goal to shut down restaurants and small mom and pop shops so food could be controlled by them. Food will need to be bought through chains, or industrially and you will need to have appropriate documentation (Covi-pass or ?) to buy food.

Biden will remove himself to create issues. Trump will either try to delay election or there will be a staged “removal of Trump” that will be FAKE. Or stage a nuclear event. Years ago a prophecy was put out in the Freemason Lodge that a nuclear event would happen in the Western U.S. This likely will be blamed on the leftist protesters.

Gold & silver will be illegal to own or barter. This is the reason the Freemasons have invested in online digital currency.

There are places in Colorado (named “Babylon) & Montana that the Freemasons built & stocked with food & provisions for themselves to disappear before the chaos.

November – very big event that will make the right & Christians linked to what happens to Trump “rise up” & there will be “killing in the street” which will bring in a military (no specification of which military i.e. country or UN). The military will go door-to-door & make people take the vaccine.

Supposedly those police, fire or medical workers that will not go along with these plans are being removed to prevent problems in executing these plans.

God is with you & stronger than this! We are likely to have to go through things.

Obama will be back. He will not come back into power through the elections. He will clamp down. He is the end (I believe Jeremy is referring to the U.S.). After he comes there is a major event with nuclear weapons.

Do not take the vaccine. It is not good. It will end the lives of the old & sick. Jeremy’s contact told him the vaccine was genetically tailored to specific groups of people. The protesters will be eliminated as they do not want these people disturbing the new system.

His contact told him that everything has to fail (world governments, UN, etc.). After tricking people that the “bad, old world system” has been destroyed, that is when Christians will be targeted as being negative or “holding back” progress in the new system! Jeremy’s contact told him that Christians will be blamed for “manifesting End Times”, preventing people from living the way they want by talking about sin, bringing in negativity, etc. Our own families may be part of Christian’s persecution.

Matthew 10:21, King James Version
And the brother shall deliver up the brother to death, and the father the child: and the children shall rise up against their parents, and cause them to be put to death.

Luke 21:16, King James Version
And ye shall be betrayed both by parents, and brethren, and kinsfolks, and friends; and some of you shall they cause to be put to death.

The Freemasons want all of this done & wrapped up before Christmas!

80% of the Freemasons are now gone and out in Colorado in preparation for these events to happen.

Many people do not even believe there are food shortages now and still believe Trump will make things better once he gets re-elected.

Put your faith in Jesus Christ only!

Much of what Jeremy’s contact has shared with him resonates in my Spirit so I share this as a warning with the caveat that Freemasons will mix lies with truth. Also most of what was shared sounds like it is directed to what will be happening in the U.S. It is not clear, which of these events, if any, will be simultaneously happening in other parts of the world.

God ultimately decides what does or does not happen in our world. Prayer & intercession are encouraged for all whom feel led to do so.

The bible says that you will KNOW when you take the “mark”, when you offer your allegiance and worship to the ANTICHRIST., a FREEWILL choice……….that the “man of sin ” will be revealed AFTER God takes His bride away to hide her.

Sue, the scriptures reveal the sequence is the opposite of what you stated, as shown here:

1 Now, brethren, concerning the coming of our Lord Jesus Christ and our gathering together to Him, we ask you,
2 not to be soon shaken in mind or troubled, either by spirit or by word or by letter, as if from us, as though the day of Christ had come.
3 Let no one deceive you by any means; for that Day will not come unless the falling away comes first, and the man of sin is revealed, the son of perdition,
4 who opposes and exalts himself above all that is called God or that is worshiped, so that he sits as God in the temple of God, showing himself that he is God. (2 Thessalonians 2:1-4 NKJV)

That didn’t work out as he said now did it. 😂

I can only speculate about how long those prophecies will take to complete, which is how I came up with a best guess based on 70 to 80 years after the Jewish people reclaimed Jerusalem. As I’ve shared previously, that would put His return somewhere between 2037 and 2047, but since God has not revealed that to me, it could be way off. In any case, the scriptures are our best authority on this topic and we can safely dismiss any prophecies that contradict the scriptures.

Sitting quietly tonight the Lord reminded me of a Word: Obama, Tsunami & Nuclear attack by Dr Patricia Green from 2013. I did not hear her Word of Warning about all this until Sept 2015 when I first found her message.It may have been up on You Tube then..

( This post: paragraph Obama will be back- etc he is the end-After he comes there is a major event with nuclear weapons.)Now I know this may be a very hard word But Dr Green mentions Hope & Trust in the Lord.

The video is titled : Obama, Tsunami & Nuclear Attack on the USA/ it is time to Repent Dr Patricia Green.
Listen to the Whole Video very carefully it has incredible visuals maps etc… very clear to understand… it has really surprised me how very Accurate This Word & Warning was from the Lord thru the Holy Spirit to Dr Patricia Green.. it has become clearer to me the words & their meaning and is a NOW.WORD.. it always has been but just much clearer. I am jotting down all the points for future reference.-put in a Diary.

Amazingly @ the 14.33 min mark Dr Green talks of a new Pestilence – (as I heard the word & saw the picture on the screen i thought it must be talking re the corona virus we have now 2019-2020 )..she says a deadly disease that there will be no cure for it will quickly kill the people like the Black Plague.

War will follow & last 5 yrs & famine will follow quickly- Wisdom to survive this TRIBULATION Food will be scarce: but my children will be prepared for the famine. My children store up – your store houses for the famine before it strikes. Just like I instructed Joseph in Egypt in that time of famine.Be wise – store provisions

“Trump will either try to delay election or there will be a staged “removal of Trump” that will be FAKE. ”

Trump recently said that a lot of rich and powerful people hate him and that this is the last time we’re going to see him for a while.

James, all of this sounds like the soon destruction of the whore of Babylon. Do you still believe we have years before the end of the USA? Or do you think it could possibly be coming in 2020/2021?

Regarding the presidential election, I haven’t been shown who ultimately takes office, but lots of others have warned of chaos, including TD Hale’s dream about the presidential limo getting flipped over, which I believe means the initial results will be overturned. I can only speculate but it sounds like whoever loses the initial election might end up being the winner. In any case, these events are all scripted and orchestrated to infuriate the most people and ignite a civil war.

Hi James–the Antichrist is the last ruler of Mystery Babylon before she is destroyed by fire from the King of the North and he becomes the World Leader from the UN and EU. The Antichrist will be a supernatural being during this time and will have all the answers and considered all knowing. The King of the North is most likely Russia who at this moment considers America to be Sodom/Gomorrah. Russia is also thought to be Gog of the Ezekiel War that invades Israel. Seems that Babylon would have to be destroyed first if Russia is still around to do the Ezekiel War where it is decimated. The timing and sequence of events during this time probably won’t be known until it is happening. Babylon will become a killing field for Christians when the AC steps back into his position as King of Babylon . At this point he will not be a mere man but will indwell the satanic spirit of Apollyon from the bottomless pit.

I had a dream a couple of weeks ago and I saw all these dates flipping through a calendar really fast I did not retain any of them but December the 11th. I do not know what that means

If nothing else, ,Dec 11 is the day to celebrate Hanukkah.

When he spoke about the current freemasons being 80% bugged out already by now and that they are at the Colorado bunker city that they call literally “Babylon”, likely under DIA

Why would anyone refer to their own city of refuge as “Babylon”? It’s so strange, if only it was not so strange at all

Trump is a reprieve–a postponement of judgement–a relief and a delay of punishment for a former Christian nation that turned to worshiping Moloch. Trump is and was a breath of fresh air until the evil one returns to finish the job. Prepare your family both spiritually and physically for this coming storm until the last trumpet sounds and we are changed incorruptible in the twinkling of an eye to meet Jesus Christ and His Angels in the air. You all are going to love your new perfect body and mind and give all thanks to the Lord. All beyond your wildest expectations! All you followers of Christ out there have a wonderful future–for eternity………………………………