You are here: Home » Babylon » 2nd Beast » “Watch the Vatican. They will side with the man of sin. Their leader will be the false prophet.”
Share this post: 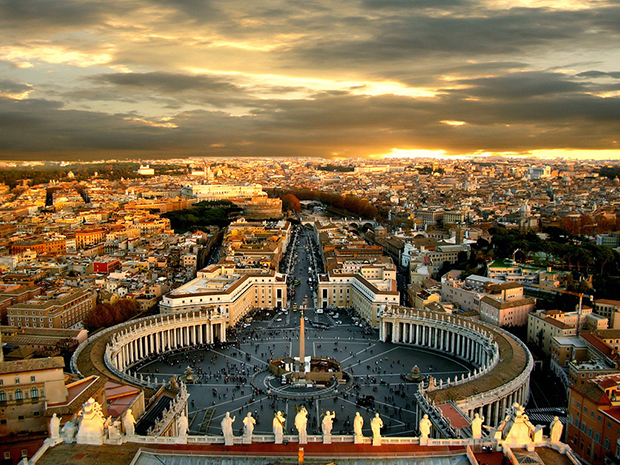 I received a word on September 24, “Watch the Vatican. They will side with the man of sin. Their leader will be the false prophet.”

So is it possible that if the current pope is forced to step down and a new one is appointed in his place, then at a certain point in time, the new pope and some remnant faithful Catholics are driven underground while the evicted pope returns as the head of the Vatican?

Further, when I read about the city of seven hills, I am instantly drawn to Revelation 17:9, 18. Both verses have something to say about the woman with the cryptic name: “Babylon the Great.”

9 Here is the mind which has wisdom. The seven heads are seven mountains on which the woman sits, (Revelation 17:9)

18 The woman whom you saw is the great city, which reigns over the kings of the earth.” (Revelation 17:18)

Could the destruction of the woman at the hands of the first beast as described in Revelation 17 be God’s judgment on those who choose to remain at the Vatican instead of going underground as part of the persecuted church?

Perhaps there are faithful Christians at the Vatican and it is them that the current pope is at odds with? So perhaps such a rift in the Vatican is likely?

What about America being Babylon? Well, the scripture does say that Babylon has daughters. And a part of the name of the woman in Revelation 17 is “The Mother of Prostitutes.” So, to me, it seems that if the mother is Babylon, then the daughters are also Babylon.

We all know only in part right now. While it is very much possible to use this partial knowledge to come up with a theory as to how things may play out, the danger lies in losing sight of the fact that this is just theory.

May I remind Mr. Thomas that Rome is not the only city sitting on seven hills. Other cities include Mecca and Jerusalem. Who is to say that a false church might not be centered in those places? Mecca is the spiritual home of Islam and Jerusalem has not always been faithful to the Lord. Let’s keep an eye out in all directions to see where the false church will come from .

I acknowledge that I do not know everything. Neither do I claim that the word I received on Sept 24 is a complete picture of how things will unfold.

But I know this: on Sept 24 I was praying over a word that Joanie Stahl had shared about the sign of the final end, and it was during that time that I received the word I’ve shared. That is what I received in my spirit.

I also know that there are many positions on the identity of the Babylon of Revelation 17, but the facts that this Babylon is called the mother of prostitutes in the scripture and that the scripture elsewhere seems to call any nation engaged in spiritual adultery a daughter of Babylon are like little nuggets that have been impressed upon my spirit.

Beyond what I’ve received in my spirit, I do not know anything.

Not sure if this is relevant but at the end of October the Vatican is hosting an event with COMECE (the Commission of Bishops Conferences in the EU) entitled (re)thinking Europe, with Pope Francis in attendance. It will be interesting to see what they conclude.

In the Catholic Church it is impossible for a Pope to be forced out of office. if he were pushed out of office against his will, his removal would not be valid, and he would still officially be Pope. That’s why Pope Benedict emphasized in his resignation letter that he was resigning with full freedom.
http://canonlawmadeeasy.com/2013/01/31/pope-removed-from-office/

When the real persecution is established you wont be catholic. There will be no division amongst the persecuted. We will all be Christians focused on Christ. Not Mary not Peter not rituals. The archbishop of Canterbury like the pope is a wet lettuce and false pastor. We will all be tuned into Jesus via the Holy Spirit with all the silly denominations gone. Wewill finally have abandoned tge doctrines and religions of men that have been added. Jesus alone will be the main reason they come for us.

The pop will be given authority to make war on the saints to put the mark or the number of the name of the world leader the head of the beast government on every one on earth the ones that will not bow down to the authority of the world government and the world church will be hunted down many will be headed . he is the one riding on the white horse going forth to conquer in the name of world peace the false prophet

Sujit, Torben Sondergaard who made the film ‘The Last Reformation’ which is based on how the Acts church operated has some very good instructional videos. 24 odd of them.

Rick Joyner in one of his prophetic books, think it was ‘The Final Quest’ described how all the different denominations were seen on an island buffeted by huge storms and waves. Because of every denominations own perculiar doctrine, he saw them as scewed buildings with here and there a light in it (true believers) and how the continual pounding of the waves flattened all these buildings. These lights became then one building by themselves as we are the living stones in Gods temple but how the waves unrelenting power would sweep away even a lot of these living stones.

Quite a sobering picture. But the point is that it is only those that are totally sold out to Jesus that will survive these storms. Everything else can be considered ‘Daughters of the Prostitute’ and its influence on believers.

I am familiar with Torben, Corbus, though I haven’t watched all of his videos. His movie The Last Reformation was a great blessing to me. I’d encourage everyone to watch it.

I believe the Vatican will use this new waive of technology being released to the public, to show many false signs and wonders, thus starting a revival for Satan’s kingdom/Antichrist.

I am Christian who believes in Christ but is also a practicing Catholic. Our family is looking for other Catholics who know it is time to start looking for an underground church. Is there any Catholic underground churches in the northeast pa nj area….time is running out we are away and begging Christ for mercy on the church who are sleeping. Even people who are of the world know that something is up their eyes are open I wonder why is the church’s eyes not open?

Seek and ye shall find, Phil. It is already being done in our area among devout Catholics I am aware. YOU may be called to begin it in your locale?

Your eyes and ears are open Phil and we agree with what they see and hear. This website is for all intents and purposes “anti- Catholic” and you won’t find much compassion here, but will find quite a lot of judgment. We for our own reasons, sought out a Mystical Parish that prides us with Spiritual Communion, which in the absence of the Eucharist, is entirely acceptable. So far, this is as close to an “underground Church” as I have seen. We will not submit to the False Prophet, Francis

The Pope is a Jesuit which is the religious arm of the Masonic order, there is the militancy arm and the political/business arm as well.

The headquarters for the political arm is in London and holds many titles of the royal courts including the second highest commoners degree of the 32nd which is called the keeper of the Royal secrets which should point to where to look for for the AC. The Royl Grter is small triangle above the commoners pyramid and the head of that is the ruling Monarch. Another Branch of the political side is called the Royal Arch freemasonry.

This is what the false prophet does and that is to encourage everybody to take the mark of the beast to but and sell. The pope is not doing this so even though he is part of the religious wing of masonry he is not the false prophet.

The false prophet’s software is running most domestic computers today and business/banking machines, he has actively encouraging 3rd world country to get into digital banking so that the next step will be the world wide implementation of the mark, the rfid chip and later the brain chip.

Daniel tells us that the Lion(England) will have it’s Eagle(US) wings ripped off(War of Independents) and then the Lion will stand up as a man and the mind of a man will be given to it. Daniel also speaks about the 4th Beast which will consume the world and tells us that these beast represent nations/governments.

The only government consuming the world is the UN and it does have 7 heads and 10 horns. The 7 heads make up the members of the UN permanent security council which are Russia(Bear), China(Dragon) England(Lion) and France which is part of the EU which is run by 4 presidents(4headed leopard). The 10 horns are the non permanent members which are rotated out every 2 years. The 5th permanent member of the UN is the woman that rides the UN beast which is the US. The UN is located in New York city watched by the Woman(Statue of Liberty).

Revelation also tells us that the UN Beast will have alion’s mouth and the number of the Beast is the number of a man, this lion beast man of Daniel.

Prince William was the 1000th inducted into Royal Garter since it was begun in the 1300s.

As for Masonics (there are actually 100 degrees, not 33 a most believe.) When one studies ancient architecture and understands the Craft Levels of the builders, their power and connections, it (can) give a deeper meaning to scripture about the rock THE BUILDERS rejected becomes the corner stone.

Top dawgs selected the corner stone to begin, and no doubt a group of them selected the one. So…The Rock the (stoneMASONS) rejected becomes the Cornerstone.

Masonry and Christianity are NOT compatible.

The “savior” for Masons is Hiram Abiff NOT Jesus Christ.

And they swear to demon (but most have no clue of the names’ origin). And make ritual promises as they rise by degree to do VERY unchristian things No matter the sins in our eyes they get rewarded with eternity in the Celestial Lodge.

The non-Masonics are called The Profane.