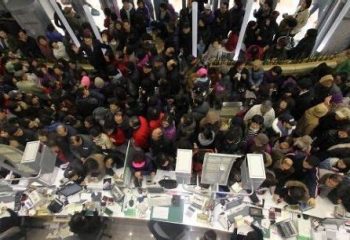 “…Fast forward to today, when a confluence of the adverse trends that emerged in 2018 and 2019, coupled with the historic economic slowdown in China’s economy, and accelerated by social media-fueled rumors about collapsing banks have sparked what Bloomberg called an ‘unprecedented’ surge of bank runs, forcing regulators and even the police to step in to calm depositors.

According to Bloomberg, in just the past few weeks, worried savers have descended on three banks to withdraw funds amid rumors of cash shortages that were later dismissed as false…

There is probably a reason for why these “rumors” have led to such a dramatic response: they merely bring to the surface whatever most already know, namely that behind its sterling facade, China’s banking system is rotten to the core, with lies upon lies about trillions in non-performing loans, coupled with growing risks from billions parked at China’s unregulated and unstable shadow banking system…

In any case, regulators are now not only seeking to soothe nerves publicly, but are also raising the protection to preserve this cushion for banks. The run in Hebei came after authorities kicked off a pilot program to limit large transactions in the province. The two-year program, which Bloomberg explains is set to be expanded to Zhejiang and Shenzhen in October to encompass 70 million people, would require retail clients to pre-report any large withdrawals or deposits of 100,000 yuan ($14,000) to 300,000 yuan…

…According to S&P, China’s industry may suffer a whopping 8 trillion yuan increase in bad debt this year. Even without this balance sheet “neutron bomb” small banks are facing a $349 billion shortfall in capital, according to UBS analysts, leading to even more small bank failures. Putting that figure at only $50 billion, the regulator said the shortfall could mean slower profit growth or even sliding profits at some institutions.

Meanwhile corporate bonds are also suffering, adding further pressure on banks and hurting corporate funding. According to Bloomberg data, about 80 billion yuan worth of Chinese bonds defaulted on and offshore so far this year, the most in at least three years.

The result of all this, predictably, has been a collapse in confidence in Chinese banks and its logical next step: bank runs.

In the most recent episodes, authorities stepped in last month to halt banks runs at two local lenders in Hebei and Shanxi. On July 11, savers rushed to withdraw money from Hengshui Bank, also based in Hebei, before the police put a stop to it.

In response, the local offices of the People’s Bank of China and the CBIRC did what China does best: they scrambled to preserve confidence in the system, saying in a joint statement that Hengshui Bank and its branches are legitimate financial entities where any savings under half a million yuan are protected under China’s deposit insurance regulation. They also reassured depositors that their money is safe and urged them not to “blindly” withdraw savings.

In fact, they also urged them not to withdraw savings at all.

When that did not work, police took people into custody, issuing reprimands to those spreading rumors, according to the statement.

Meanwhile, as Bloomberg adds, Hengshui Bank said in an emailed reply on Wednesday that the city government is actively dealing with the issue and called for less publicity for fear the incident leads to regional systemic risks. In other words, China is now aggressively censoring any online media that discusses China’s questionably solvent banks.“

I had a dream. I saw a Dragon like the ones you see at Chinese new year celebrations. It was being held in a square area with caution tape on all 4 sides. Trump appears and has a pair of huge scissors. He cuts the dragon in half and all the Chinese people at the parade celebrate.

I think God will deal with the CCP and free the people of China. I also had a dream about Iran being free
. I believe there will be a massive move of the Holy Spirit on these 2 countries. Thousands if not 10’s of thousands will be saved.

Have you seen the news about all the weapons manufacturing facilities and “power plants” in Iran that have recently exploded/burned up/been hit? Something is definitely goin on.

[spoiler title=” “]Check your sources
Dear Expat Gal,
Go back to the original source, TFIpost.com, and see for yourself that it is unfettered Indian propaganda.

Bank runs are part of the Chinese financial DNA. It is to be expected with a large, unsophisticated grassroots population. There are more than 4500 banks in China and only two of them had localised runs recently.
TFIpost’s journalism is so poor, it does not merit a critique. 90% of the content of that article is opinion, and grossly exaggerated. I found only three facts in the entire piece and these were all based on secondary sources.
The author that you quote, Amit Agrahari, describes himself as a devotee of Lord Shiva. In my book that makes him a worshipper of an idol.

Hi Daniel – Hopefully these sources are less controversial to you….

Expat Gal, just ran across this – for your dissection, discernment and for the brides’ flasks to be filled to overflowing ALWAYS KNOWING the ONE who has called us , chosen us and perfecting us into His image by His Word which triumphs over ALL THE SCHEMES of man – because No weapon formed against us shall (be able to) prosper !

Hi Thomas 😊 – I appreciate the link.

She really does a great job of putting all the documents & data together in one article. Her research matches mine. These plans & the proof of these plans being made DECADES in advance are in existence for EVERYONE to see! 😢.

I have been sharing these in the articles related to covid-19 that I have written & most recently in this article on a documentary that shows Covid-19 is a PRE-PLANNED, Live, simulated EXERCISE – https://z3news.com/w/covid19-plandemic-live-training-simulation-exercise/

Last night, I ran across documentation that covid-19 was funded in early 2019! Evil & deceitful people at the highest levels of government AROUND the world are involved in this deception.

The markets are broken! 6 years spent studying finance & economics and the markets are so manipulated that they behave “irrationally & illogically” for anyone following real news that negatively impacts the markets. I see this continuously with the U.S. markets as well.

I was lamenting this yesterday based on thinking I could use real economic data to determine when to make currency transactions (changing dollars to the local currency). Absolutely not! The exchange rate has no basis in economic data. These powerful people have destroyed any semblance of real markets based on supply & demand & other foundational economic truths! 😢