You are here: Home » Babylon » Antichrist » The war room of God 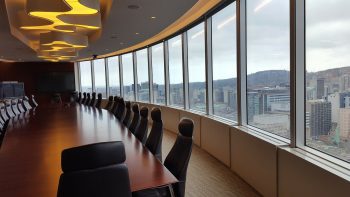 In the past weeks, God has been shifting the visions He gives me to that of nation assignments. I understand that this is part of the Holy Spirit movement to His global church to prepare the true body of Christ, the remnant, for spiritual battles in the end days.

In this vision, I was allowed by God to enter the war room in heaven for Asia region and observe. I know that there are similar war rooms in heaven for Europe, America region etc. They have a similar concept and way of operations. I saw Jesus Christ as our Military Commander, the Holy Spirit and sometimes God the Father joined them. In addition, there are angels who had been given assignments over nations. These are high ranking war angels who represented angelic host armies.

I saw the map of the world laid out on the conference table and Asia was demarcated into districts and locales. I saw the demonic stronghold over each country and the corresponding angels that God has placed over these nations. I was amazed at the thoroughness of the well preparation that Jesus and the Holy Spirit has been undertaking for our sake all these while. I saw the angels denoted many details of demonic principalities in the locality and their up-to-date activities for regular report out to God.

I saw Jesus and the angels watching closely what was happening and the progress in each nation. They were looking at the demonic activity in the physical context and the human reaction. At first I thought Jesus would devise strategies to deal with each demonic principality but I saw that God was disdainful of the demons. I realized that God had so much power that He can instantaneously crush the demons like a troop of mini toy figures with His hand anytime He wanted to. However He did not crush them because He is waiting for us.

I saw the role that humans were to play in the end days. Although we are fragile in physical body and abilities compared to God, angels and demons, we had been given the authority and we received the overwhelming love of God as our kinsmen. God would partner with His people to fight satan and his renegade demons, even if our part is just to speak, pray or proclaim. God provided the power and authority, we speak the words and the angels are sent forth by God to do His assignments.

In terms of timeline, God has told me to study what happens to America, for what satan does to America, he will shortly do to the rest of the world.

As of late, Holy Spirit has drawn me to the deliverance aspect of ministry and has definitely opened my eyes to things that were never taught in the church while growing up or during the time I have been saved. Your church, your pastor, Sister so-and- from the prayer line and internet may all be taken away in the blink of an eye. You’ve just become Plan A through Z for yourself and family. I encourage every believer to learn while you can all that you can and add these tools to your growing spiritual arsenals of prayer, fasting, praise, worship, tongues, taking communion, quoting scripture, courts of heaven, etc.

Marine Spirits and how to be free from their attacks – Ed Citronnelli: https://www.youtube.com/watch?v=sNbJ0N4DZks

How to Identify & Be Delivered From Spirit Husband & Wife – Ed Citronnelli: https://www.youtube.com/watch?v=7kJUA0_Tz-0

Yesterday as I was standing in my kitchen a vision came to me. I could hear the chanting and see the headlines and they were all saying JESUS IS HERE! I have had closed visions before but only less then a handful of eye open vision. I could see crowds of people as they were all gathered together and excited. I could see them cheering, chanting and basically jumping up and down with joy. I saw a newspaper with headlines stating JESUS IS HERE! I have had dreams of the AntiChrist coming and being revealed. I have recently had the Lord point out to me the promise land book by Obama. I have had MANY confirmations from the Lord about Obama. While I am not seeking him out or waiting for the antichrist…I know the Lord keeps putting in my heart to PAY VERY CLOSE ATTENTION. I feel that maybe the vision I saw yesterday is a soon to come headline.

Great article from Dr Carrie Majed’s facebook site. Here’s a synopsis of a lengthy article about “Will an RNA Vaccine Permanently Alter My DNA?” from Dr. Doug Corrigan who holds a Ph.D. in Biochemistry and Molecular Biology, a master’s in Engineering Physics (concentration: Solid State Physics), and a bachelor’s in Engineering Physics (concentration: electrical engineering). He was also a NASA Graduate Fellow: Endogenous reverse transcriptase enzymes can essentially take single-stranded RNA and convert it into double-stranded DNA. This DNA can then be integrated into the DNA in the nucleus through an enzyme termed DNA integrase. It is quite probable that the RNA introduced into our cells via the vaccine could be reverse transcribed into a segment of double-stranded DNA, and then integrated into our core genetic material in the nucleus of the cell. The RNA provided to cells via a vaccine has been altered in the lab to increase its stability such that it persists in the cell for a much longer time. Therefore, the probability that a molecular pathway could be found that results in this RNA being converted over into DNA is much higher. The average human body has 30 trillion cells, and the vaccine will be deployed in up to 7 billion people. If you multiply small probabilities of RNA converting into DNA across these large numbers, the probability that this could occur in a modestly large number of people is very real. Here are two possible outcomes: FIRST- , it could result in a segment of the population with an increasing percentage of their tissues being converted over to genetically modified cells. These people will almost inevitably develop autoimmune conditions which are irreversible, since this foreign protein antigen is now permanently hardwired into the instructions contained in their DNA. SECOND possibility is based on a pathway… Read more »

Phil-Sydney. Just re your comment above Dec 08 2020. .Excellent information.(RNA-DNA ETC)

I was horrified to see in the UK a ninety year old lady is the first person to receive Pfizer BioNTech vaccine UK.(-outside clinical trials) so with the Covid no’s over in the UK. Boris Johnson has been behind the BIG PUSH TO GET PEOPLE VACCINATED..OBVIOUSLY ELDERLY MAY BE THE FIRST RECIPIENTS.

https://www.bbc.com/news ( short video + story. also on the 9 news on computer)

Unbelievable.. I wonder how this lady will fare in a few months-to a year or two.?/ They wouldn’t have a clue what they are receiving -so many naive- ( innocent of the contents etc.. will be tricked into having this vaccine & virtually see it as a good thing)

She was a slender lady being wheeled out after the jab in a wheelchair with her mask on with the Nurses clapping as she was wheeled past them. .Oh Boy!!

I wouldn’t be surprised if the first round is just a harmless placebo. Possibly administered in the first 6 months in certain areas. In those areas a significant “improvement” in cases will be seen (propagandized) while in other non jabbed areas an increase in cases will be seen. The Vax will then be pushed as safe and effective then mass Vax will be mandated. I just don’t expect to see mass casualties after initial jabs, then many would refuse. This is all conjecture but they have this planned out

Thanks Anne
Very interested to see the death rates of older people in the UK over the next winter period (Dec 2021 to January 2022). If what I expect is true a potentially damaged immune system for VAX takers will mean a deadly FLU season where older people will be unable to fight viruses and infections. I SINCERELY HOPE I’M WRONG. If this scenario plays out I fully expect the MSM will characterise their deaths and potentially other deaths as totally un related to the VA-X. We are living in amazing times. I must re-read 1984 by George Orwell. One of my favourite High School readers way back in the 70’s. matt 10 v16 “Behold, I send you forth as sheep in the midst of wolves: be ye therefore wise as serpents, and harmless as doves.”
Merry CHRISTmas all readers
Phil in Sydney
Glorious day today here. Praise God for the freedoms we still have.

Thank you for sharing this dream, and that it is one of a series. It would be very helpful if you could share more details, like details about the preparation Jesus and the angels are making for us. You say they are making preparations, but not what. Also you describe the host of Heaven viewing the activities of demons. What are the assignments given to the nations? Can you provide some more detail about all of these things?

Interesting and truthful, as confirmed in the Book of Daniel where the Prince of Persia prevents Michael the archangel from getting his mission accomplished to get a message to Daniel. Lately I’ve been feeling the strongholds over Dubai are lifting. As UAE and Israel come together, it is protection for the Apple of Gods Eye,. However, the Emirates still have ties with corruption in Libya, and Libya to Russia, so pray against the principalities over all three of these-Dubai, Libya, and Russia, for Israel and Benjamin Netanyahu’s sake and protection. I don’t think anyone realises how much a Trump presidency meant to Israel, as Obama is public enemy number one with Bibi and Zion. Another stronghold I’ve learned about is Yemen. Humanitarian atrocities there are off the charts, which you never hear about in the media, as the country has little political significance. God hears the cry of the suffering of the people there. Pray!i have been praying for the conversion of crown prince Sheik Mohammed in Dubai, but I never knew why he was placed on my heart. I think that this treaty with Israel helped me understand Gods heart and order were way ahead of my understanding of why I heard the song Blackbird in reference to him, and the LORD said he was going to place his blood on the wings of Muslims like a red winged blackbird, the crown prince himself. Prayer changes everything. In addition to the Middle East, I will be diligent to pray against the principalities over Far Eastern Asia, too especially China as laid out in this article. Shalom and God bless.

Awesome freshest word from Julie Whedbee. Please go to Behold I Come, Julie’s site, or 444 Prophecy News to see it. James or Heather–Would you please put this powerful message up as an article? Anointed!Thanks,
Bill

Excellent deep answers to questions on warfare we have rarely heard discussed.https://youtu.be/_m8ceIyX9Zk