You are here: Home » Church » Persecution » It was as if a war broke out with revival, severe persecution and martyrdom all at once. 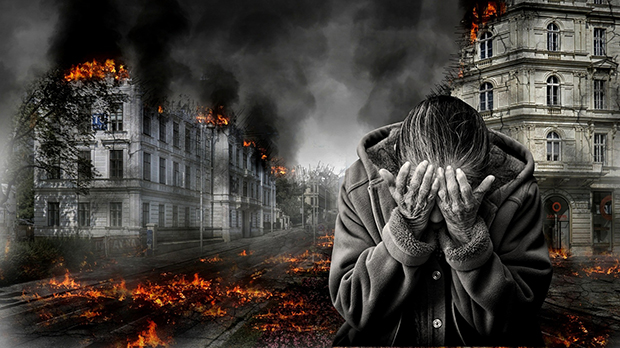 On April 6, 2020, the Lord told me to pray. As I entered the Presence of the Lord and closed my eyes, I began to see a vision.

They were seated in the heavenly places. I knew they were principalities of darkness enthroned as rulers over the wickedness perpetrated in Canada and the United States.

Both were dark, and their presence was grim, loathsome and fearful. They were extremely powerful and growing more and more powerful every time someone sinned in these nations.

They were being worshipped by multitudes of people in Canada and the US. These people were offering oblations and sacrifices to these principalities through abortion, fornication, sexual sins, pornography, homosexuality, and any other evil practice or sinful wickedness that men have been perpetrating against the Lord ever since these nations came into being.

As the people worshipped these beings through their evil acts, the people were being filled more and more by the power of these evil spirit principalities. The dark and evil power they exuded was filling the people more and more as the nations continued to delve deeper and deeper into wickedness.

As I continued praying, the light and victory of the Lord came. I then prayed in victory binding spirits and loosing the victory of God over the Church and over many souls that the Lord highlighted to me.

On April 11, 2020, as I was sitting in my prayer closet, I re-entered the same open vision in which I saw the evil principalities over Canada and the United States.

From the left side, I saw the Lord strike as it were these two principalities with a blast of light, and they fell face down, slamming down over the land of Canada and the United States. When they slammed down upon these two nations, massive revival began. I saw the Bride of Christ carrying the glorious gospel all over Canada and the United States. The gospel was covering the land.

It was as if a war broke out with revival, severe persecution and martyrdom all at once. The Lord spoke to me about the years 2025-2030. I don’t know specifically if this severe persecution will begin then but I know massive revival will begin as the Bride begins to cast down these principalities by declaring the Word of the Lord and using the keys of heaven in the true, humble authority of Christ.

When the Lord struck them, there was a massive burst of light that made them fall. I understood this blast of light as the voice of the Lord thundering from His end-time bride, His set-apart and hidden remnant of prophets who will proclaim His word in purity, in power, and in mature manhood in the fullness of the stature of Christ. This will be one of the great exploits that they do: principalities over nations will be bound and cast down causing massive awakening and an outpouring of the Holy Spirit over the land (Dan 11:32).

There is a heavy emphasis on Isaiah 60 right now. The Lord will bring this to fulfillment in our lifetime. We will see the coming of the Lord. God bless you, keep you and shine His face upon you! He loves you so much. You are His beloved bride! Shalom, Maranatha.

I have seen the same things coming, once I saw a huge black warrior doing battle with a huge white warrior and it was over a church

Right now everyone needs to go to God/Jesus themselves. God will show you who’s real and who’s false. Don’t go persecuting pastors and prophets and apostles or you will make yourself ripe for judgement. Take everything to Jesus and pray for the salvation of all people. Gods word says “It’s not my will that any should perish but that all come to repentance. Our example is Jesus! What did Jesus say to the people who wanted to stone the woman caught in the act of adultery? Let the first person who has not sinned throw the first stone. No one stoned her because everyone was a sinner accept Jesus! Jesus told the woman Go and sin no more or something worse will come one you!” That our example! Look at the bloodline that Jesus came from! He came from Rehab the Prostitutes line! Jesus came to save lost souls! We must follow Jesus’s example in the New Testament.

God Bless you, Matthew. I believe what you have heard from the Lord. On Steve Quayle’s website, there is a vision under his Q Alerts that talks about Canada repenting or suffer God’s consequences. Out of the mouths of 2 to 3 witnesses….

April 6, 2020- “We’ll meet again’: Queen Elizabeth “Invokes WW2 Spirit” to defeat coronavirus” ____________________ I will first share a Dream I had in 2018 of WWII MILITARY PLANES dropping bombs onto the earth. In my dream, I dreamt that I was downtown about to walk into a highrise office building. As I walked into the building, I looked up at the ceiling and layers of fibrous material were exploding through the ceiling. This fibrous material looked like insulation used for inside the walls. The colour of this material was bluish /dark purple. The layers were about 4-5 inches thick. The whole ceiling came down because of this fibrous material, so I went outside…the same material was falling in layers all throughout the sky…falling to the ground. I then seen 5 old Military Planes which looked like they were from WWI or WWII, which were dropping bombs onto the earth. I went back into the building and everything seemed normal again. A naked man (no private parts) came through the window. I handed him a White towel to cover up. End of dream (I believe what I seen in my dream was of the Sky Rolling Up Like A Scroll, as mentioned in Revelation 6. I didn’t know WHY I seen the old style Military Planes from WWI or WWII. When you look at a picture of the universe, it is bluish/purple color. About the naked man, it had to do with the earth being destroyed and putting on the new.) It’s amazing the Dreams God gives us! ____________________ April 16, 2020- I dreamt Queen Elizabeth was in my bed, she had the covers up to her neck, so I had to sleep elsewhere. I then took a picture of her and I. End of dream ____________________ April 6, 2020-… Read more »