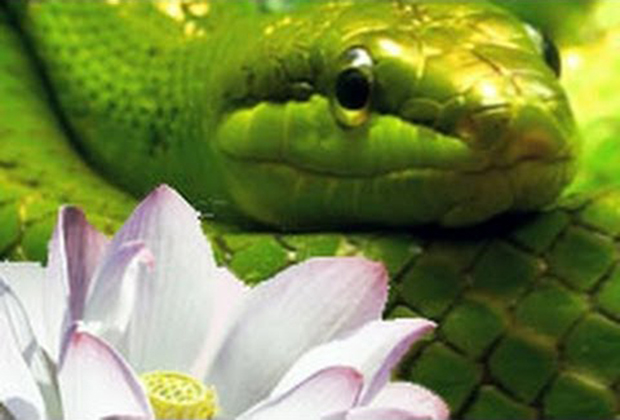 In the 15-minute video shown below, YouTube broadcaster Barry Scarbrough shares a dream which confirms what I believe God is revealing right now, the rise of the antichrist spirit, specifically the rise of the beast system. The video was published on November 4 2017.

At the 4-minute mark, Barry shares the following testimony.

I see flash visions, sometimes just two seconds. This was a flash vision of a snake that was approaching, almost turning into a lotus flower.

Adding to Barry’s interpretation, the white lotus flower represents the deceptive appearance of the antichrist spirit, which presents itself as pure and lovely to those who lack discernment, confirming the imagery revealed to the Apostle John of the rider on the white horse (Revelation 6:1-2), which is the antichrist masquerading in the imagery of the Messiah, the Lord Jesus Christ, who also rides a white horse. (Revelation 19:11)

Satan operates under a cloak of darkness, presenting himself as something good. His followers are deceived into committing terrible deeds because they believe his lie that it is for the greater good, similar to how German soldiers justified the mass murder of millions of innocent Jewish people, including hundreds of thousands of children. In the same way, the antichrist will make his case to the world, promising the path to peace and prosperity when in reality it is the way to death and destruction. Beware of the lotus flower because within it is the serpent.

Thanks to Expat Gal for sharing this video.

“My understanding of it is the antichrist is going to be birthed very soon and may already have been birthed.”

Or perhaps he has already been birthed, but hasn’t been indwelled by Satan yet? and that it was is happening now or very soon?

I’m of the opinion they have at least one possible ‘body’ ready to go at all times and have since the time of the Apostles. They only have a short while and a lot to get done with a very short notice, if any. Some like everyone’s favorite Austrian failed artist and Napoleon were used as prototypes to test out methodologies in preparation for the big one.

It’s most likely from the current world scene that you are right and the complete indwelling of whoever it ends up being is near. As John says ‘Even so come quickly Lord Jesus’!

I came across a prophetess earlier this year who saw detailed visions of the future end times. She saw that the antichrist will use the lotus flower as his main symbol.

2015 paris “climate changing” meeting , illuminati/globalist/elite use big ball ,
you could see there is lotus flower and a lot of witchcraft picture

this is very interesting dream, any thoughts
any interpreting , he did not cover the whole thing

Hi ask_question
Pope Francis may be involved in building the third temple or he can represent the Papacy which is facilitating it. Rapture happens after that and Fig tree represents discerning of times and seasons. My two cents.

He talks about the rebirth of the antichrist which is the point where the devil enters into and indwells the antichrist. If what many people have said about Obama becoming the antichrist then he is alive and well and we are about to see him assume his role. An interesting thing too, my husband and I were talking about how I have consistently been seeing the number 11 lately and especially 11:11 or 1:11. I’m also still seeing 911. Shortly after that I found out the number 11 in Bibical numerology means chaos, disorder, and can represent the antichrist. Chills!

Today in a vision I saw a lotus flower !

Same here. I’ve been seeing 11:11 for about a year, it’s everywhere. It seems as though I never look at the clock unless it’s 11:11. I prayed and begged God to show me why and immediately in the days following I start seeing 911. So, I felt like it was some sort of warning of a disaster. I prayed for God to show my husband that I’m not crazy because I always tell my husband all that God shows me and shortly after my husband came home and said that he was seeing 11:11 everywhere!! God is good and He hears His people!! I will say too that lately both of us have been seeing 3:33, not sure of meaning. Does anyone remember when Trump visited the pope he gave Trump a lotus flower?

Well T, I know that 33 is a number that the elite/masons regard as a high number in their beliefs and that’s all tied in with the dark side. Especially in 33 degrees like in latitude and longitude. Yep, this morning when I looked at the clock it said 8:11, so I’m consistently seeing 11’s. I also wondered if ’11’ could mean like in Revelation the scripture that talks about ’10 kings for one hour’, 10 plus 1 equals 11. I think that may be part of it too.

Yes, another confirmation, Beverly had a dream on May 23, 2017 https://youtu.be/BMKoWFoLGkE called “OBAMA’S INAUGURATION” AS THE BEAST”
The Lord explained it to her recently in this video: https://www.youtube.com/watch?v=-DYwQBuvcrw&t=2635s
Obama Becomes The Beast on Halloween 2017

Dr. Robert Mawire just did a presentation on this topic

Yes the antichrist is indeed rising and at the same time the truth of God is rising like an unquenchable fire within the bellies of those called to oppose this false system. Let it be so Lord.

A very poignant article James. I agree, the serpent does want to appear as something good and right so that people are more apt to want to follow it. Since the Anti Christ system is well on its way to operating the world over, and the Anti Christ himself is already on the scene – publicly proclaimed or not, the rebirth is almost another replay of Eden. The serpent specifically refers to deceit – that’s what he did to Eve, while the Dragon, to power – that’s what Revelation says he gives the Anti Christ system, power, seat, and great authority, so the fact that this is about a serpent means we’re looking at a deceit that is going to be ‘reborn’, or brought on the scene as something new and advanced when in reality it’s been around for eons. We need to be very aware of some ‘new’ idea or fad that will appear on the scene very soon, because that’s going to be the temptation to partake of a fruit from which there’s no turning back.