You are here: Home » Prophecies » Vision of three former prophets checking on their spiritual sons
Share this post: 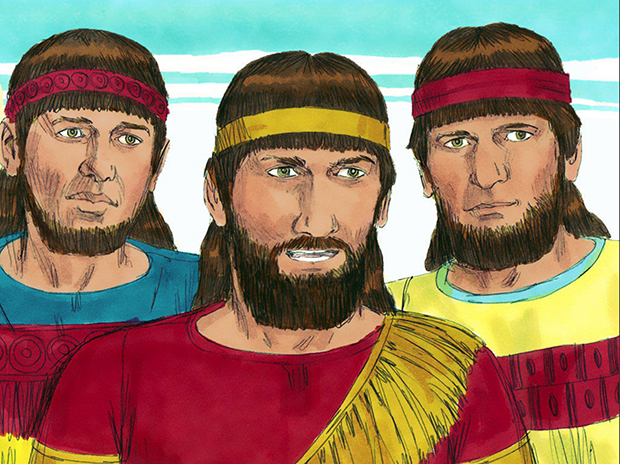 Early yesterday morning, I had an amazing encounter with three former spiritual fathers that is important for where we are prophetically in our current timeline.

In the vision, I was in the desert and I was sitting in front of a big tent on a very small wooden bench. Deborah was a prophetess, judge, city leader and gatekeeper, and as a prophet myself, I knew I was seeing this vision through her eyes.

I was sitting in the shade of the tent flap above me in the heat of the day. The tent I was sitting beside was pitched next to a well-traveled, sandy road of sorts that led to a big city that was further down the road. I was looking out from the tent and I saw what appeared to be some people coming my direction from afar.

I watched them till I could see that there were three men coming towards me. My interest was piqued as I had not had anyone come by for a while. When they got closer, I was surprised as I recognized them! The three men were Paul Cain, John Paul Jackson, and Kenneth Hagin.

I wondered what they were doing walking in this dry lonely desert region. Soon they had come close enough that I waved at them and got up to stand. Kenneth Hagin then said to me, “Deborah, what of our Sons?”

I knew that these former prophets were looking for their spiritual sons that they had trained and were now concerned about their progress, but also to see what they were doing with their mantles. Interestingly, they did not stop to converse with me further, but smiled at me as they continued to walk by me and down the road to the city.

I felt the concern in their words and in their eyes revealed their need to go and see the current affairs that were surrounding their spiritual sons (the prophets) activities.

Interpretation:
The month of February is important in the timeline of heaven for His prophetic purposes to be released into the earth. Many former prophets have gone home in the February’s of the past and their prophetic mantles are important keys to the continuance of the governmental inheritances being furthered by those who have been entrusted with them.

This is a time of true reflection for our future direction.

The date of this encounter was 2/13. In 2 Kings 2:13, Elisha took up also the mantle of Elijah that fell from him. Then he went back and stood by the bank of the Jordan.

Heaven’s Governmental Fatherly Wisdom and Counsel is coming to strike the current turbulent flow of the prophetic activities in the church in order to bring stability again to the function of prophets, and to the Body of Christ so that she can function properly for the decades ahead of her.

Judges 4:4
4 Now Deborah, a prophetess, the wife of Lappidoth, judged Israel at that time.
5 She sat under the palm tree of Deborah between Ramah and Bethel in the hill country of Ephraim, and the Israelites came up to her for judgment.

1 Kings 19:19-21
19 So Elijah left there and found Elisha son of Shaphat, whose plowing was being done with twelve yoke of oxen, and he drove the twelfth. Elijah crossed over to him and cast his mantle upon him.
20 He left the oxen and ran after Elijah and said, Let me kiss my father and mother, and then I will follow you. And he [testing Elisha] said, Go on back. What have I done to you? [Settle it for yourself.]
21 So Elisha went back from him. Then he took a yoke of oxen, slew them, boiled their flesh with the oxen’s yoke [as fuel], and gave to the people, and they ate. Then he arose, followed Elijah, and served him.