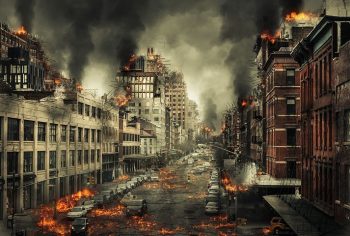 * She has technical difficulties so you can start at 2:58 minute mark.

4 The Lord is in his holy temple, the Lord’s throne is in heaven: his eyes behold, his eyelids try, the children of men.

5 The Lord trieth the righteous: but the wicked and him that loveth violence his soul hateth.

6 Upon the wicked he shall rain snares, fire and brimstone, and an horrible tempest: this shall be the portion of their cup.

She then received the prophecy. This is a hair-raising humdinger. It is not a good sign for 2021. “They will run through the streets & panic. As they run, they will see charred bodies. The odor of sulfur will be in the air. They will wander in shock as their eyes behold the destruction. Everything will be rubble and burnt. Sudden destruction will have killed many.

They have refused Me. They did not come to Me when I call them. The cities will be plundered and burned. Those remaining alive will cry for death. The children will be missing. Mothers will lay in the streets, mothers will lay in the streets. They have hardened their hearts. They would not turn away from the evil ways and murders. Their sin and abominations reach the heavens the ground is soaked with blood the blood of the innocents and cries to Me day and night.

My judgment is perfect. I will repay the evil doers and arrogant, unrepentant people will know I am the LORD of hosts! I will not be mocked. War is coming to your nation. You have not heeded My warnings. You have ignored My prophets and messengers and tried to silence them. Now you will see My wrath and fury unleashed. I am an all-consuming fire.”

Things that came to mind while reading this prophecy.

Directed Energy Weapons (DEW) – like those used in Paradise, California

Children missing due to Rapture of the innocents

The sulfur smell could be from volcanoes erupting which will cause great destruction & burn anything in the path of the lava or from the fiery debris from the eruption. Right now, many of the world’s volcanoes are becoming active.

I agree and have dreamed of volcanoes. The LORD told me. “I have hidden things deep within the earth that i will now call forth to judge man”
Springs are hidden in the earth. Volcanoes, rivers, animals of all sorts such as snakes..insects such as spiders most importantly as many tend to forget hell itself is hidden deep within the earth
I believe as man continues to play w STRANGE FIRE such as the opening of the new CERN portal on the night of the winter solstice Dec 21
Then we should expect the outpouring of jealousy from a GOD who only longs to be w HIS creation that for some reason chooses to run away or turn to step fathers for love
Make no mistake this all grieves the LORD
Its not that hard to deny yourself and please HIM
Now more than ever we are being called to seperate ourselves from this world
Hint hint dont spend your stimulus on a new TV if you do, dont leave it plugged in theyre watching you! More than your watching it
Its time my friends to stop using your bible as just a coaster to set drinks on top of!
Much liove.
Juan El Soyandor

IT IS TIME! GET OUT OF BABYLON ASAP!
By Lyn Leahz
https://www.youtube.com/watch?v=EGiq0hpBJGY