You are here: Home » Babylon » Mark of the Beast » VISA offers $500K for restaurants to stop accepting cash.
Share this post: 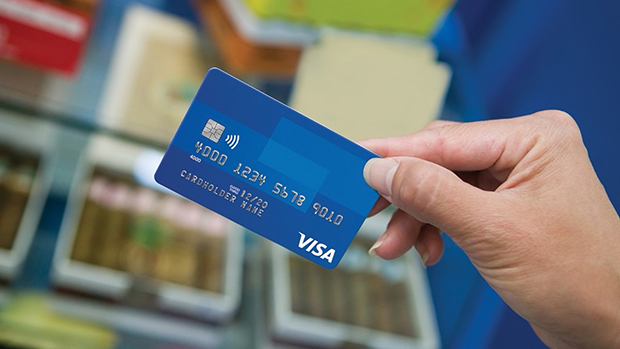 We are seeing Bible prophecies fulfilled in our daily news headlines. A press release from VISA last week is a great example of how our world is moving closer to a cashless global financial system described in Revelation 13.

Today Visa (NYSE:V) announced it is launching a major effort to encourage businesses to go cashless. Aiming to create a culture where cash is no longer king, the program will give merchants increased ability to accept all forms of global digital payments. Visa will be encouraging and helping merchants go cashless by using innovation to their advantage in order to stay competitively connected to their customers.

To encourage businesses to go cashless, Visa is announcing The Visa Cashless Challenge, with a call to action for small business restaurants, cafés or food truck owners to describe what cashless means for them, their employees and customers. Visa will be awarding up to $500,000 to 50 eligible US-based small business food service owners who commit to joining the 100% cashless quest. (See the complete press release)

According to Bible prophecies, cash will be eliminated as the world transitions to digital currencies, managed by a global central computer system able to track every purchase by every person on earth. With such large financial incentives like this coming from powerful institutions like VISA, it is just a matter of time before the ancient prophecies are fulfilled.

16 And he causes all, the small and the great, and the rich and the poor, and the free men and the slaves, to be given a mark on their right hand or on their forehead,
17 and he provides that no one will be able to buy or to sell, except the one who has the mark, either the name of the beast or the number of his name.
18 Here is wisdom. Let him who has understanding calculate the number of the beast, for the number is that of a man; and his number is six hundred and sixty-six. (Revelation 13:16-18)

Shortly after the shocking news [about the currency withdrawal] in India, Swedish authorities – among the global leaders in the”War on Cash” aimed at building a totalitarian “Cashless Society” – announced that they were exploring a plan to create e-cash on the road to phasing out cash completely. Known as the “e-Krona,” the “digital cash,” unlike regular cash, goes through computer systems, ensuring that Big Brother can monitor all economic transactions. Sweden (like India) is being used as a globalist testing ground as the establishment seeks to phase out cash using justifications such as “safety,” “security,” and taking down the evil “black economy.” Forecasters say the Nordic nation could be the first truly “cashless society.” Canadian authorities have been working on similar schemes as well.

In Australia, several major steps have also been taken in recent days on the road toward eliminating financial privacy and freedom under the guise of a “cashless society.” In mid-November, US banking giant Citibank, a member of the UN-backed anti-cash alliance, announced that it would stop handling cash at its Australian branches. “This move to cashless branches reflects Citibank’s commitment to digital banking,” said the bank’s chief of retail banking. Swiss banking giant UBS, meanwhile, decided to promote the idea of killing high-denomination bank notes in Australia. The Swiss mega-bank claimed that phasing out the notes would help the banking industry in addition to helping the government collect more in taxes and wipe out the black market.

Globally, governments, media, banks, and even academia have formed a single, unified chorus (propaganda) to push the idea out to the public that “cashless” is good for everyone, and only criminals use cash. Prepare to hear it and read it hundreds of times in the coming months: “cash is for criminals”; “cash is for criminals”; cash is for criminals”; etc., etc. However, for individuals, cash still has plenty of important advantages. Cash is one of the few remaining options for financial privacy that doesn’t create a permanent record of every purchase or transaction you make. It’s also an easy way to reduce your exposure to risks in the broader financial system.

Until next time,
Don McAlvany

The beast system is already here… I was out of town for business…ate at McDonald’s… before I left town… my smart phone was soon showing me local deals or coupons…big brother knows what I doing before my family does.

Well, Visa is everywhere I don’t want to be.

They are showing people the future, a cashless society filled with Artificial Intelligence, and Robots running the world.

If anybody has seen the latest “University Of Phoenix” commercial, I see a lot on TV ? ( https://m.youtube.com/watch?v=2TTd2FmYr0g ), one will see they are already telling people to go back to school and be a life long learner, because robots are taking over. And in the commercial she gets a degree dealing with computers (Information Technology), thus we better get one dealing with technology as well.

Attached link is to an excellent article from a secular site (King World News), which discusses just what doesn’t really exist anymore (financially), and where the World is taking us all:
http://kingworldnews.com/this-is-terrifying-will-all-of-your-money-be-wiped-out-in-the-blink-of-an-eye-2/

Good article…King World News…has been warning of the Greatest Depression for a number of years… it is going to happen. I have been following their advice and gathering hard assets…gold, silver, cash, food, ammo,…barter will be King if you don’t have the Mark or chip.

It almost feels like this should be illegal. They’re already competitive enough… I smell a rat called the global elite beast system. Control is the name of the game but we have news for you visa, God is in control and he warned us about your little go cashless or go home endeavor. When push comes to shove and shoves comes to taking a mark on our right hands or foreheads to be able to buy or sell, we will run, and if caught, we will go home, to our eternal home.

I wonder what people who work for these globalist corporations would think if they read about the mark of the beast. “Oh, just a lucky prediction”?, or, “the God of the Bible is the bad guy and so of course he would try to deceive His followers into thinking the mark will be evil”? How do people fall for these lies without taking pause and doing some serious soul searching?

About 5-6 years ago I had a dream wherein my wife called me to bring cash to our local “Wally-World” to make a purchase for our son and his family. I spent $422 for four jumbo-packs of disposable diapers (for them — their youngest is almost potty-trained now) and one bottle of mustard (for us … and it was hidden behind a security counter; the government agent overseeing the cashier had to decide that I could purchase a single bottle). The actual purchase was for $421-and-small-change, but no change was being given for cash purchases.

There was heightened security in the store; only the actual purchaser was permitted in where the products were. The set-up was more like Costco in that regard, with security fencing inside the store; those accompanying the purchaser could wait in a snack-bar area, but could not walk around the store with them.. Each cashier who took cash had a government security agent standing over his or her shoulder to watch that no change was given out. Mustard was not the only item that required approval of that security agent to purchase, and the security agent had full discretion as to whether to permit the purchase, and in what quantity. I don’t know what else was “rationed” in this manner.

Paving the way for the Mark of the Beast.

Spot on James! You are providing ‘play by play’ instruction as to how this is playing out. Thanks so much! Timothy