You are here: Home » Prophecies » United States Prophecies » Civil War in America » URGENT Warnings for the U.S. – Destruction of America Has Begun, Muslim Attacks on U.S. Soil & “Time Is Up”
Share this post: 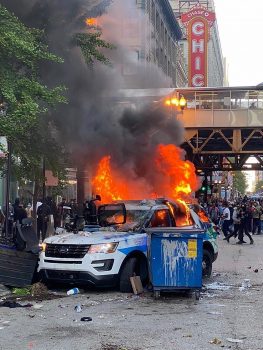 The first one is from Cryptic1 & was published on June 14th.

IT is coming – the time of the end, the beginning of the end of days! My children must draw closer to Me now more than ever before and seek Me every minute, every hour of the day – for I am not so far away from those I call My own. Hurry children! Gather to the safety of My arms for IT is coming. (I told the Holy Spirit I don’t know what IT is). IT is the destruction of America, Babylon the Great – which has begun.

I have already told My messengers that the downfall of America would begin with civil unrest – which you see in your streets and will soon witness In your homes. Pray children, pray against the evil that will befall your nation. I speak of anarchy and chaos, division and strife and wars against this once great nation – of the demise of America! My heart weeps – for once you were great and mighty like My servant Samson who fell mightily. (This is a reference to a prior message I was given ‘America is Judged’ 6.7.20). I gave him strength beyond imagining – but like Samson, America has turned from Me and has pledged her allegiance to foreign gods (Samson answered not only to God but to himself and was his own god in that respect) and peoples (in Samson’s case the Philistine harlot Delilah). O America that you were healed – but you will not be!

Children pray, pray against the coming destruction and devastation! If you knew what was coming you would cry out and beseech Me for My everlasting mercy. Soon you will be hearing the footfall of soldiers, of the enemy who is waiting, biding the hour when he will strike and take your country unawares. O America If only you knew what will befall you! This is but the beginning of the fall of the once great and mighty nation of America. She will be trampled underfoot and will lie in rubble and dust. How far is she fallen from My grace! She shall no longer be called great, she shall be called the least of all nations. Like a guttersnipe, nations will trample upon her and desecrate her land. They will pillage and pilfer and will take her people into slavery as the Egyptians of old did.

Prepare, prepare, prepare for the fall of America and the destruction of Jerusalem. But there (meaning Jerusalem) they will not succeed for I will raise Myself up and I will return to avenge My people on that fateful day. Then the world will know and acknowledge Me as King and Lord over all.

I come soon children upon the clouds of glory.

The signs in the heavens will intensify to usher in the return of your Savior, your Lord and King who will return soon.

The Great I Am.

The One who Is and who Was and will come again.

I return soon children! Prepare your hearts to receive Me. I come for hearts that are pure and loving, forgiving all – even your enemies. Forgive one another as I have forgiven you.

Jeremiah 50:22-24. 22 A sound of battle is in the land, and of great destruction. 23 How is the hammer of the whole earth cut asunder and broken! How is Babylon become a desolation among the nations! 24 I have laid a snare for thee, and thou art also taken, O Babylon, and thou wast not aware: thou art found, and also caught, because thou hast striven against the Lord.

The second one is a video released June 18th by Caroline Diadem entitled, “Muslem terrorist attack warning & Church call to pray”. Melanie Hall made this comment on Youtube beneath this video, “Caroline: when I was a receptionist at Calvary chapel in Boise Idaho, a Muslim convert came urgently requesting our pastor . His word for him was the mosque he had been attending there in Boise had 15 minutes of prayers to allah and the remainder of time of almost 2 hours was used to plan attacks when called upon to the infidels. This is confirmation.” Someone else referenced the book, “Twilight in America: The Untold Story of Islamic Terrorist Training Camps Inside America”, written by Martin Mawyer and Patti Pierucci and published by Christian Action Network in 2012. Here is a description of the book, “It’s happening right now, hidden in the rural neighborhoods of America, protected under the guise of religious freedom. In the privacy of Muslim compounds across our land, they are preparing our own citizens to wage a holy war-jihad-against America. As many state and federal authorities turn a blind eye, these Islamic extremists convert our own citizens, then teach them how to kill. One informant, who lived undercover on these compounds for more than eight years, warns: ‘They are asleep. They are a bomb’ waiting to go off. Read ‘Twilight in America’ and learn how the plan and ultimate goal of radical Islam is not just to inflict terror by attacking our nation, but to inspire homegrown terrorism from within, committed by Americans against Americans. The plan is working, and the goal is being achieved. This is the descent that the United States is experiencing-this is twilight in America.”

The third Word released June 18th was given to Kristin of Youtube Channel, WatchWoman for Jesus, after a dream where she saw total anarchy. The Word is at the 11:30 mark of this video. God tells her:
– “Time is no more” & “to give these words with a huge urgency”
– His people perish for lack of knowledge
– We live in a time of huge distractions
– There are some who will not listen until it is too late
– There will be some where a seed will be planted and they will begin looking up for God’s Return.
– Go into your quiet place, to call out to Him, sup with Him & ask Him for His truth
– You may need to rise one hour earlier or go to bed one hour later to make this quiet time for time with Him
– Make time to read His Word
– Stand firm, pray about everything
– The days will get darker – evil has increased
– You must pray, pray, pray
– You must rebuke evil in His name & keep your eyes on Him no matter what you see
– He is the only hope in the darkness
– He is the Way, the Truth, the Life
– He loves us all beyond our understanding
– DO NOT give up!

Additional dreams & current intel regarding what is happening currently in the U.S. that points to a soon coming invasion of the U.S. by Russian, Chinese and U.N. soldiers.

America is NOT Babylon the Great or Mystery Babylon, which is a city in the desert. Watch for a new desert town to be built fast – like Dubai was but closer to the Mecca, Saudi Arabia area, then add Rome (Vatican) as a part of the Babylon system. It is not America. We did not murder the Prophets. Please read the Bibles details about Babylon the Great. It is not America.

These prophecies are thousands of years old so I think it’s a mistake to make conclusions based on past events when so much of it remains in the future. There are many prophetic warnings showing severe persecution coming to the USA. I’ve personally seen it too. I don’t believe the USA is the mother of all harlots, but we were conquered by her decades ago and have become the primary base of operations since then, which explains why our government is behind the coming persecution. There are many scriptures revealing the mother of all harlots is Rome, as explained in detail in my previous podcasts. The leaders of Islam are all submitted to Rome through Freemasonry, which has been under Jesuit control since the 1600’s.

We did not murder the Prophets