The LORD gave me another WARNING about an ECONOMIC COLLAPSE. I have received many warnings about this before, but this one was quite unusual! I will post below a few of the ones that I have received in the past.

I do not know the timing of the warning, but the time seems near!

[Then I heard that the Stock Market is about to CRASH, and that people need to SEEK THE LORD’S WISDOM concerning their assets! ]

This is WARNING to all who will listen!

Humpty Dumpty sat on a wall….

Humpty Dumpty had a great fall…

I give warnings so MY people can prepare! ”

Revelation 6:5-6:
And when he had opened the third seal, I heard the third beast say, Come and see. And I beheld, and lo a black horse; and he that sat on him had a pair of balances in his hand. Then I heard what sounded like a voice among the four living creatures, saying, “Two pounds of wheat for a day’s wages, and six pounds of barley for a day’s wages, and do not damage the oil and the wine!”

I also want to add something else. During the time period when I received this message, I saw “11:11” on the clock on three consecutive days. Many people will say that this is Numerology, and not from the LORD. However, the LORD does speak through numbers in the Bible. HE has shown me a few numbers that have significant meaning!

I have not seen “11:11” for a VERY long time, so seeing it three days in a row is definitely the LORD giving me a WARNING SIGN!!

Double judgment is coming to AMERICA! Prepare your hearts before the LORD!

BE IN DAILY REPENTANCE!

PUT THE LORD FIRST IN YOUR LIFE!

GET YOUR PHYSICAL AND SPIRITUAL HOUSES IN ORDER!

“And I heard another voice from heaven saying, “Come out of her, my people, lest you share in her sins, and lest you receive of her plagues. For her sins have reached to heaven, and God has remembered her iniquities. Render to her just as she rendered to you, and REPAY HER DOUBLE according to her works; in the cup which she has mixed, MIX DOUBLE for her.” Revelation 18:4-6

I have seen 11:11 almost every single night for the past several weeks. I also try not to get into the numerology mysticism but believe God is so intentional in everything, including times and numbers. So interesting you have been seeing it too.

Amazing my wife and I have been seeing 11:11 for the last 2 months very often. Gods hand is ready to move, Praise Jesus!!🙌🏼🙏🏼

Old Testament verse tells of a covenant between God and the people of Israel.

“Therefore thus saith the LORD, Behold, I will bring evil upon them, which they shall not be able to escape; and though they shall cry unto me, I will not hearken unto them.”

The passage in particular is part of a covenant between God and the people of Israel. God says through Jeremiah that he would protect the people of Israel in exchange for worshipping Him exclusively. But he warns of a “conspiracy” among the men of Judah and the inhabitants of Jerusalem.

“They are turned back to the iniquities of their forefathers, which refused to hear my words; and they went after other gods to serve them,” the passage reads. “The house of Israel and the house of Judah have broken my covenant which I made with their fathers.”

Jeremiah 11:11 – This verse gives the reader a very stern warning telling us that those that will not submit to God’s command will not be able to escape His wrath. There is no fleeing from His justice, or avoiding His presence. Evil pursues sinners and entangles them in traps from which they cannot free themselves; unless they turn from their wicked ways and seek Him with all their heart.

Jeremiah 12:17 – Judgment definitely is coming to any disobedient nation. Jeremiah writes, “But if any nation does not listen, I will completely uproot and destroy it, declares the LORD”

We need to make an assessment of our life, admit our sin and turn from it; remembering that sin hinders our prayer life and robs us of spiritual power.

God wants to forgive and restore, He does not want to destroy us. He does not want to bring judgment on us. He says, Jeremiah 29:11-14 – For I know the plans I have for you,” declares the LORD, “plans to prosper you and not to harm you, plans to give you hope and a future. Then you will call on me and come and pray to me, and I will listen to you. You will seek me and find me when you seek me with all your heart. I will be found by you,” declares the LORD…”

Attorney Sarah Weddington, who famously represented Norma McCorvey, a.k.a. “Jane Roe,” in the landmark abortion case Roe v. Wade, died on Sunday at the age of 76.

Sorry to be posting so much folks

Don’t apologize! Keep them coming Matt. We like your stuff! I’m going to theorize that Sarah W’s death is significant right now and that it represents the end of a very dark era. Time for new beginnings and breakthrough of righteousness in the midst of a putrid pile of you know what swirling all around us. Yes Lord!

Agreed, the timing of Justice Ginsbergs death meant something and I think this does too. 49 years and this being a shemitah year… To many Swiss cheese holes lining up.

Agreed Bill,
Always enjoy MattNZ posting. Very interesting.
All the best for the new year, everyone.
Have one short for march 2021. Remember Maria’s post on March
Phil

Hi Phil,
Do you have a link to Maria’s post on March?

MattNZ- you’re good! Someone will come across these comments and have an aha! moment. I am grateful to others who leave information, video links and articles.

I had a dream this past year where in the dream I woke up and was telling my husband that Roe verse Wade was gone. I kept saying over and over I can’t believe they did it. I thought I would never see this day. I did not go to bed thinking about it either. So I believe it will be overturned.

The Israeli Ministry of Finance hosted a simulation of a major cyber attack on the global financial system from 9 December 2021, with representatives from a total of ten countries and other financial institutions, including the IMF, in a multinational security exercise called “Collective Strength.”

Does anyone else see 212 often?

As this is a Shemitah year, this warning is particularly significant.

America is likely not to receive a blessing this go around. May God extend His mercy.

Interesting, when I went to play tennis this afternoon, there was a large 11 on a sign laying on the court. I even stopped and noted it. God is speaking. Indeed.

May we have ears to hear, eyes to see, and courage and boldness to do as we are instructed.

I came across this year’s ago, the #22 also has to do with a person’s DNA. Bill Gates talked about removing the God Gene with Vaccines.
_____
“HERE IS WISDOM. LET HIM THAT HATH UNDERSTANDING COUNT THE NUMBER OF THE BEAST”

– Let’s start with the Spiritual element from Genesis 3:22 ~ And the Lord God said, “The man has now become like one of us, knowing good and evil. He must not be allowed to reach out his hand and take also from the tree of life and eat, and live forever.”

– THE SCIENTIFIC ANSWER IS FOUND IN DNA MAKEUP OF A HUMAN OR CREATED ACCORDING TO GODS PLAN BETWEEN A MAN AND A WOMAN.

– WHAT THE ELITE WANT IS AN EXTRA 22 BASE PAIRS MADE UP OF DNA AND PROGRAMMABLE NANOTECHNOLOGY FOR CONTROL ALONG WITH TRANSHUMANISM FOR DOWNLOADING YOU CONCISENESS!

– SATAN WANTS TO COMPLETE THE THIRD TEMPLE BY ADDING THE MARK OF THE BEAST
66 BASE PAIRS MIXED WITH IRON(TRANSHUMANISM,NANOTECHNOLOGY)TO COME! 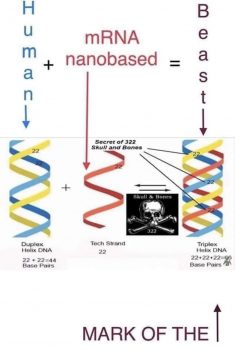