You are here: Home » Trading » Silver » Upward Price Move in Metals Interrupted by Pull Down 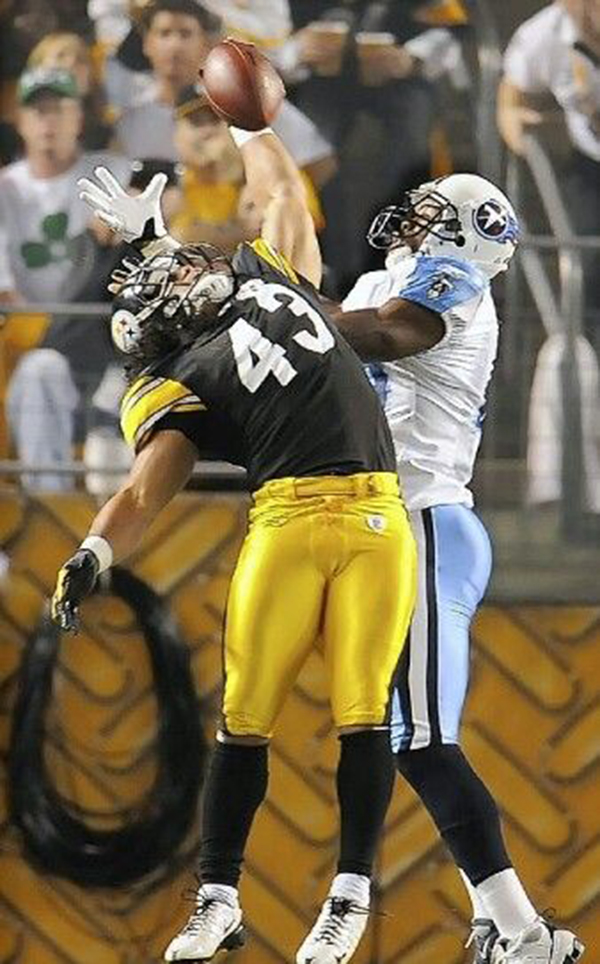 Today I saw a short vision of a Pittsburgh Steelers football player after he had scored a touchdown. My view was on the lower half of his body as he jumped way up high towards the fans in the bleachers. I saw the black, white, and yellow colors in his uniform. As he was moving straight up, a hand from below reached up and grabbed his ankle just above his white cleats. His upward movement was stopped by this hand pulling him back down. That was it.

The Pittsburgh Steelers are the only NFL team whose name is based on a metal rather than a living being. Their logo is based on the logo of the American Iron and Steel Institute (AISI). I believe their team name, their colors, and the white cleats were all references to precious metals, gold and silver.

My interpretation is the player jumping up confirms metals are going to be moving up soon, but the move up will be stopped by a strong pull back down, which was represented by the hand grabbing the ankle.

An upward movement confirms what I saw in my previous post about a black and white cat preparing to eat from my white plate. However, the cat was only preparing to eat while the football player was already moving up and already being pulled back down. I believe this indicates this move is no longer on hold, but is now upon us and will not last long. There has been a lot of downward pressure on prices since the Fed announced an interest rate hike on December 14, so I am expecting to see the overall downward trend resume after this brief move up. I was not shown any dates or prices.

The information shared here relies on interpretations that might not be accurate. It is provided only as a starting point for prayerful consideration and not as a recommendation for investing.

I had a dream last night where I was at our ministry’s large annual end of the year conference. It happened to be a Wednesday. I had a small amount of money Invested in oil stocks. I wasn’t sure when to convert it to FAX instead. Then, from the pulpit I heard the pastor interrupt and say that all major stock indexes in the US had were down dramatically. I pulled out my phone and checked my stock app. The Dow was down 2432 points (that number is approximate) and the others were down also as well. It was a Wednesday. I emailed my two close friends and told them to sell and buy FAZ immediately. I then looked again and the Dow was only down 31 points. I sent the big V article to some friends showing that it was being fulfilled. I began to wonder when the big final crash would occur.

Interpretation: I had been pondering James’ big V vision and wondering if the V meant that it would be a 5 day process or that the bottom of the V would occur in the middle of the week. The big drop number felt like an actual inter day drop value. The later drop value drop of 31 points actually felt like it pointed to an approximate date. (Our conference happens December 28-31). My personal application was that I needed to go ahead and buy some FAZ before I thought. (I am a new investor and just getting started with small amounts of money.)

Prices rarely move in a straight line, but usually in waves with partial retraces of previous moves. I believe what I am seeing is a relatively small move, a partial retrace of last week’s drop, that will be quickly reversed. As I stated, the overall trend remains down.

I don’t believe this is the start of the three legs up, which seems likely to be the point of the Steelers player getting pulled down. I believe the next move up will be only a partial retrace of last week’s drop. The overall trend remains down to the long term support level, which I believe will be around $15.00. I was not shown dates for the three legs up, but my guess is it begins after dropping to the support level and might coincide with bearish moves in equities.

Looks like things are slowly moving into place with a stronger dollar on the rise and silver dropping.all we need it a big downturn in the markets and FAZ rocket to take the profit’s to buy silver for the transfer of wealth and support the church. Plan on buying more FAZ in the next few weeks when I can

James, the football player had scored a touch-down. You have to touch the “down” (low) first perhaps? So if you are correct about the next low being $15, you might not see it until then, not counting the normal bumps and wiggles on the way down. Just a thought. SNS

Thanks SNS. I appreciate the help with interpreting because it is quite challenging when no dates or prices are included. I have more confidence in the prices I have seen over the past few weeks, which is why I still believe the overall trend is down. If there is a spike prior to reaching $15.00, I expect it to reverse quickly.

Hey,
Thanks so much for sharing this post. This was such an interesting interpretation on the Steelers!
Best,
Dennis

James, do you have any new insight for silver?

I wrote an update here: https://z3news.com/w/silver-prices-testing-hurricane-theory/

This is off topic but regarding economic.

When will be Rev 13:17 apply? On the beginning of Tribulation or in the last 3 1/2 years of tribulation?

Anto, Revelation 13:7 will happen when the A/C takes power over the ten kingdoms and asks for worship. This is after the 7 seal and 7 trumpet judgments.

Bob, thanks for your explaination, so it means it will be effect on the last 3 1/2 years of tribulation.

James. did you see any new numbers or insights? Do you still hold the long position? Thanks!

Monday morning, I saw more numbers, including $14.00, $14.01, and $14.66, which I believe are all spot silver prices. Those prices confirm what I stated in my post, the overall trend remains bearish.

I am still holding a long position because of seeing the cat and the Pittsburgh Steelers football player, which both indicate some kind of upward movement, but I don’t have any information on how far up it goes. Monday’s price movements make me wonder if my interpretations are wrong. Grabbing the football player’s ankle might mean the upward movement gets stopped before it moves very far. The cat was not yet eating, so it might reveal a longer term perspective rather than a near term move, which would confirm the three legs up (three Christmas trees), which likely come after reaching the bottom.

I had a dream on the Dec 18th I was at the top of a giant Silver slide. 15 ft wide and probably 30 feet down. I had no choice but to go down it and I did very fast. But I knew the the way of escape was down. God was saying “This is the way” Psalm 32:8

I had a dream about Putin and Gold 2-3 years ago. Putin had me putting change in brown coin holders. As I was grabbing change from the bag suddenly there appeared 2 Large Gold coins and 3 smaller ones. I believe there are 2 Large Gold moves coming then smaller ones but each move will be over extended periods of time. At the beginning of this dream I saw through a window a large ship (Gold) crash into the shore. Then the ship reversed course rapidly. Then Putin appeared and the Gold coins which were the interpretation of the ships..

Hmmm… Ever seen the documentary “Touching The Void” about a Mountaineer who gets trapped in a crevasse? Great documentary btw

Can you interpret the dream pls David?

Basically God is showing me a way of escape. If the slide represents Silver than it is going much lower. I do not interpret my dreams, only the Holy Spirit can give revelation to meaning.
I had a dream a month ago(10/13/2016) and I went to get my car keys at a friends house(a realtor). He was in bed with a hangover(bad sign for real estate) A small bull dog started tugging at my pant leg. Then I was handed my keys 1 was a large Gold key the other a Gold Bullion Bar which was light.
So the interpretation then was a small up move in Gold which happened Gold was under $1260 on Oct 13 then went above $1300 in November then down from there. The realtor was after the dog so it seems the Real Estate market is the next sign then I receive or purchase my Gold.
Just a note, I never ask God to give me stock or Gold info in dreams. I trust God to show me what He wants me to see or know.
I seek His face not His hand.

David, this may not be a correct interpretation, so its’ just an idea. The width of the slide relative to how far down it goes may represent range trading down. Let’s say for example we were going to go down $1 from $16 to get to $15, assuming that’s the correct bottom based on James’ revelation. So if the slide was $0.50 wide, maybe that’s the maximum size of the “bounces” in range trading ($0.50) on the way down. SNS

Thanks John. We very much appreciate your generous support for Z3news.com.

I woke up a couple of months ago with “silver to go down to $14” in my head.
I should have listened a bit more carefully….

Thanks for sharing this confirmation Jenny.