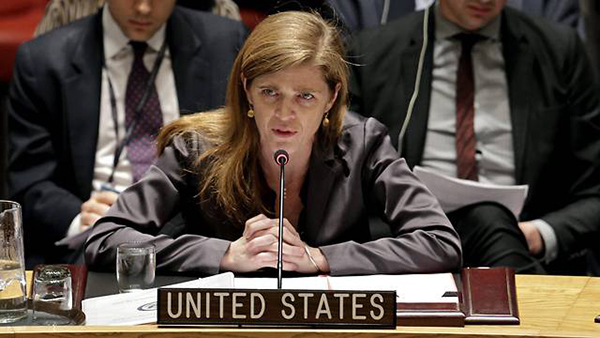 In a dramatic shift in U.S. policy, the United States chose not to use its’ veto power to block a United Nations resolution demanding Israel “immediately and completely cease all settlement activities in the occupied Palestinian territory, including East Jerusalem.” The resolution also states Israeli settlements there have “no legal validity and constitutes a flagrant violation under International law.”

The UN resolution makes an outrageous claim that Israeli settlements located within the borders of Israel have “no legal validity,” which is like telling American citizens they have no legal right to live in Kansas or Florida or any part of the United States.

The resolution calls Israeli settlements a “flagrant violation under International law,” which is absurd because there are no laws preventing citizens from living within the borders of their own country. The UN statement refers to the Fourth Geneva Convention, which deals with the occupation of a sovereign nation by a foreign military power, but that does not apply in this case because Israel is not occupying another sovereign nation. The State of Palestine has never existed as a sovereign nation anywhere on earth, has never been recognized as a member of the United Nations, has no land of their own, and has only existed as a concept created by the United Nations in 1947 in their attempts to create a two-state solution with the Jewish people in the land of Israel.

The Palestinians claim Jerusalem as their capital and Gaza as their largest city, which is outrageous because both are located within the borders of Israel. (Source: Wikipedia). That would be like the United States claiming Moscow as our capital city and expecting the Russians to be okay with that.

U.S. Ambassador to the UN Samantha Powers attempted to justify today’s U.S. abstention by claiming the prospects for a two-state solution dramatically decreased since 2011 due to Israel’s continued settlements in Palestinian land, which she called illegal.

There are two problems with her statement:

The solution to finding peace in the Middle East is as simple as reading and believing the Bible because it answers all questions of who owns the land of Israel.

God continued His everlasting covenant with Jacob, the grandson of Abraham, whose name was changed by God to Israel, and to his descendants (Genesis 17:7-8 and 26:3-4).

“The land which I gave to Abraham and Isaac, I will give it to you, and I will give the land to your descendants after you.” (Genesis 35:12)

The prophet Zechariah warned that whoever touches Israel touches the apple of God’s eye (Zechariah 2:8). He also warned God will make Jerusalem a heavy stone for all the nations and all who lift it will be severely injured.

1 The burden of the word of the Lord concerning Israel. Thus declares the Lord who stretches out the heavens, lays the foundation of the earth, and forms the spirit of man within him,
2 “Behold, I am going to make Jerusalem a cup that causes reeling to all the peoples around; and when the siege is against Jerusalem, it will also be against Judah.
3 It will come about in that day that I will make Jerusalem a heavy stone for all the peoples; all who lift it will be severely injured. And all the nations of the earth will be gathered against it. (Zechariah 12:3)

By failing to recognize God’s eternal covenant, the United States has demonstrated disregard and disbelief in God and His word. Our abstention in the UN vote equates to taking sides against God and aligning with His enemies, both spiritual and physical. By our actions, we have effectively called God a liar, which history shows is a big mistake.

Historians have documented many examples of disasters striking the United States whenever we have pressured Israel to divide their land.

On February 18 2011, a similar UN resolution was proposed, but the U.S. wisely stood with Israel and vetoed it. No major disasters struck the United States in the weeks or months following the vote.

In 2005, President George W. Bush’s “Roadmap to Peace” forced Jewish residents to evacuate their homes in the Gaza Strip and ordered bulldozers to destroy their homes. On August 23 2005, the same day the last Israeli settlers were evacuated, a small insignificant tropical storm formed in the Atlantic Ocean. The storm, which was named Katrina, defied all computer models as it developed into a devastating hurricane and slammed into New Orleans on August 29 2005. It was the costliest natural disaster in United States history. At least 1,245 people were killed and another 66 still listed as missing. Katrina forced thousands of American citizens to evacuate their homes and many homes were destroyed. (Source: Wikipedia)

The events in 2005 did not involve any UN resolution. The last time the United States abstained on a UN Security Council resolution regarding Israeli settlements was under the leadership of President Jimmy Carter. The U.S. refused to veto UN Resolution 446, which allowed it to pass on March 22 1979. That resolution claimed Israeli settlements “have no legal validity and constitute a serious obstruction to achieving a comprehensive, just and lasting peace in the Middle East.” (Source: Wikipedia)

The world celebrated the passing of the UN resolution because four days later on March 26 1979, in a ceremony at the White House, the Egypt-Israel Peace Treaty was signed. However, it appears not everyone was happy about it.

Many more examples have been documented showing direct consequences for betraying Israel, especially when we have pressured them to divide their land like we did today. For more, see John P. McTernan’s book, “As America Has Done to Israel.”

This is very disturbing. I have contacted my congressman, Senators, and the White house via their respective web pages…

you might as well contact satan (but don’t do that) for good it will do.
Both parties are hopelessly corrupted.

Battendown the hatches, America! Take cover! Prepare for Yahweh’s response! May God have mercy on America.

My prayer to God in heaven is that He be very specific and put an earthquake centered right under the WHITEHOUSE. Amen.

look out now. God will not be mocked. We are going to reap big time for what we have just done…. Keep your eyes open…… Stay alert and stay awake…. and pray Psalm 91 over yourself and your family so your protected….

Obama couldn’t generate his civil war so he chose to spit in the LORD’s face. America is sadly tied to his bad decision(s).

So are we Matt. NZ was one of the proposes of the resolution after Egypt pulled out. Serious for us too.

I just now listened to Pastor B. Faircloth’s sermon which is in response to the UN vote. Wow. If you want to know what’s coming to the USA—if you still think we have a “reprieve” for a while—listen to it. I wish the entire country could hear it.

Can you give us the link to Faircloths message?

Javita, I don’t know how to do all that. He’s Pastor Benjamin Faircloth—he is on you-tube and facebook. Hopefully someone here can help you!

I agree, Jesse. This is the prophetic message of the hour.

Here are the nations that voted “yes” to this resolution:

Only the United States abstained.

There were zero “no” votes

What about the African nations?

This makes my heart incredibly sad…our government does not represent the will of the American people. It is shameful in so many ways, may God have mercy. Apologies to our good friends in a Israel. Humble repentance.

Thanks for this information James. May God have mercy and grace in what will surely follow.

Wow, I didn’t quite realize that the UN resolution gave the Philistines all of East Jerusalem, including the Temple Mount!!
Divided Jerusalem.

The UK is beginning to shake. Where I live we have had severe disruption, roads have been closed, ferries cancelled, we’ve had power cuts in the far north due to storm Barbara and storm Conor. Then today I’ve heard parts of London have had no water!

God have mercy on the US

Not a chance. No mercy on Sodom and Gomorrah, although
Lot’s family survived (not his wife, though). One judgement of
the U.S.A., comin’ up.