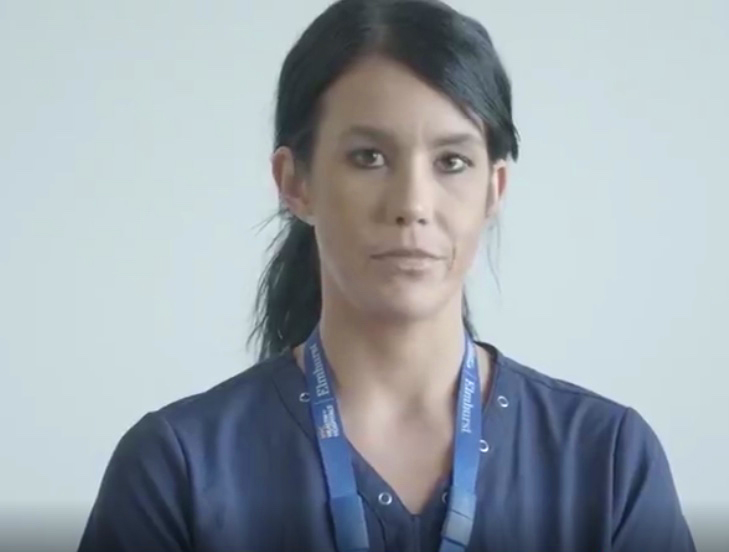 Nurse Erin Marie Olszewski has answered the call of duty many times in her life, putting her safety at risk in acts of patriotism and service. At age seventeen, Erin enlisted in the Army and deployed in support of Operation Iraqi Freedom. While in country, she received the Army Commendation Medal for meritorious service. She was combat injured. Erin eventually exited service as a sergeant and became a civilian nurse in 2012.

Erin answered the call of duty again in 2020 by putting her safety at risk during the COVID-19 crisis. This mother of three and patient advocate volunteered again for service, leaving her home, family, and hospital position to offer her professional nursing skills to help in NYC, the epicenter of the pandemic in the US. She was assigned to Elmhurst Hospital, the epicenter of the epicenter. Now, she is reporting on what happened inside Elmhurst Hospital, putting herself and her career in jeopardy.

In this 70-minute video, she shares her first-hand eyewitness testimony of the terrible healthcare treatment of patients at Elmhurst Hospital in Queens, New York, which resulted in many deaths.

Much of which points to what may be the real reason black and brown Americans seem to be disproportionately affected by COVID-19. They are likely not dying because of some alleged genetic predisposition or a peculiar array of Covi-combustible comorbidities. But they are certainly dying from an underlying condition: a defunded, criminally negligent, and corrupt hospital system, which during this crisis seems to take extra pains to do them in, and which may be financially incentivized to do so.

Experimented on by unsupervised doctors-in-training, misdiagnosed, and rushed onto ventilators based on edicts from anonymous supervisors, Elmhurst and other public hospital patients have not stood a chance. And yet, confirmed by a new study from Yale, hydroxychloroquine and zinc and/or other therapies have been shown to work, especially when given early to those few people who actually develop symptoms of COVID-19.

Praise GOD for Nurse Erin and her Esther like boldness to speak out and stand up! May she be blessed! Brethren let us cover her in prayer. We need more doers and not just hearers

The government doesn’t have everybody’s interest in mind, no government has ever had and they never will, the government is only for the psychopath elites to control us with the money, religions and the politics. They have no empathy they don’t love or care they constantly create chaos and conflict and hatred war and disunity for the control and the profit and the enslavement of the people, there is no profit in peace and unity. The most big pharma doctors, corporation managers, politicians, police, soldiers and the clergy are order followers, and the order followers are the most evil people in the world. Everything that the loving and caring patient advocate Nurse Erin Marie Olszewski has said is true and all that and much worse has happened to me when I was in the hospital from covid19. The drugs and the ventilators that the hospitals force on you and give it to you are the ones that really kill you, and it was a miracle that I have survived, but with terrible side effects from the drugs and the ventilator. I have been at home from the hospital for 4 months now and I have peripheral neuropathy, shooting, burning, stabbing nerve pain and tingling and numbness, right foot drop, fatigue, muscle pain, joint and bone pain, can’t sleep, negative thoughts, no balance, painful and very difficult to walk even short distance even with crutches. I was put on the ventilator machine and drug induced coma for 35 days and 55 days in the ICU and 12 days one step down from the ICU and 28 days in the physio ward, before that I was sick at home for 10 days self isolation from covid19,”wasted 10 days” but I got worse and was taking to the hospital. My mental faculties are… Read more »

Thanks for sharing your amazing testimony Djelal. So glad you defied the odds and survived the ventilator. Amazing how our federal government pays tens of thousands of dollars to hospitals for each covid patient put on a ventilator. That by itself shows something very sinister is behind this man-made bioweapon, funded directly by Jesuit Tony Fauci’s organization. Perhaps the ventilators are another way to increase the covid death count, as much evidence has surfaced showing many ways they’ve tried to manipulate the numbers.

I take my hat off to you Erin for exposing this scandal well done.
It makes me wonder if the same stuff is happening in uk hospitals which I guess looking at this it could be.

Lesson: the bigger the hospital, the bigger the system, the more the tail wags the dog. It becomes a mass-production, one-size-fits-all treatment mill. DO NOT listen to doctors or experts or authorities who tell you otherwise, and avoid especially these big, public, subsidy-based hospitals As always, educate yourself first and don’t rely on the system to save you.