You are here: Home » News » Jesuit Schemes by Nation » Nicaragua » U.S. punishes Nicaragua with tougher sanctions due to free and fair election results
Share this post:

The resounding victory of Comandante Daniel Ortega on November 7, when he was reelected with 75.87% of the votes for a fifth five-year term, the fourth consecutive, had the Ley Renacer as a reaction from the Biden administration, even though the electoral contest was attended by six national parties, including the Sandinista National Liberation Front (FSLN), and many other regional ones.

Immediately there were calls to disavow the elections, to invoke the Inter-American Democratic Charter (IDC) of the OAS to expel Nicaragua from this organization and to increase economic sanctions. Before the polls closed, Joe Biden called the elections a “farce” and pointed out that “the Ortega and Murillo family govern Nicaragua as autocrats, no different from the Somoza family against which Ortega and the Sandinistas fought four decades ago”, as is necessary, those of Josep Borrell, diplomatic chief of the European Union, were not long in coming.

On November 19, through its foreign minister, Denis Moncada, the Nicaraguan government announced its withdrawal from the OAS declaring that “its mission is to facilitate the hegemony of the United States, with its interventionism, over the countries of Latin America and the Caribbean”.

As a legacy of Donald Trump, the current U.S. government has preferred to opt for unilateral “sanctions” to suffocate the Nicaraguan economy rather than enter into OAS debates.

The Renacer law (or Reinforcing Nicaragua’s Adherence to the Conditions for Electoral Reform Act), enacted within hours of the elections, opens the door to tougher sanctions against the Nicaraguan people. Senators Marco Rubio, Ted Cruz and Congressmen Juan Vargas and Maria Elvira Salazar, all with extensive records of interference and even support for terrorism against Cuba, championed the bill which was approved in early August by the Senate.

It is an instrument that allows requesting multilateral banks to restrict the granting of loans and even to review Nicaragua’s membership in the Central American Free Trade Agreement (CAFTA). The United States is Nicaragua’s main trading partner, importing 60% of its products. Other analysts predict that Biden would prefer not to stifle Nicaragua economically so as not to provoke a new migratory wave that would repeat the situation of Haiti or the “Northern Triangle” of Central America (Guatemala, Honduras and El Salvador). It is opportune to remember the complicated migratory situation in the region in which Nicaragua contributes only 6.8% of Central American immigrants to the United States while 86% come from those three countries.

The response of the Ortega-led government in withdrawing from the OAS takes the wind out of the sails of the organization’s officials and consultants, whose members had instructed the Permanent Council to appoint a commission to undertake diplomatic efforts at the highest level and to seek “a peaceful and effective solution to the political and social crisis in Nicaragua”. The plan included a report within a maximum of 75 days that would lead to the convening of a special session of the General Assembly and the invocation of Article 21 of the IDC for its expulsion.

The different public authorities and even opposition parties supported the government’s decision against the OAS statements and agreements of interference and last Monday 29th the alternate permanent representative of Nicaragua to the organization, Michael Campbell, refuted the summons of the Permanent Council in which reports on before and after the elections were presented. 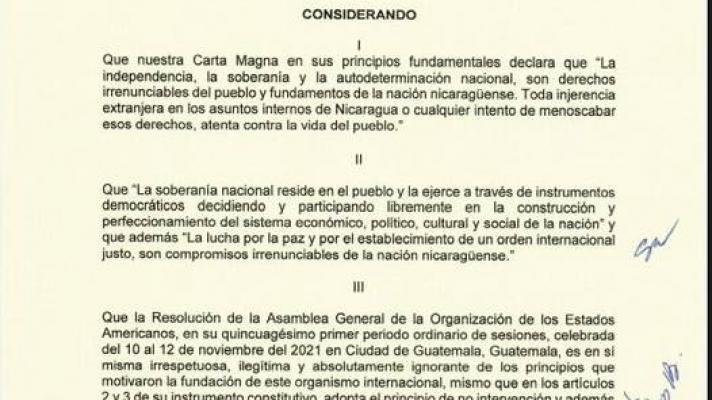 Both the Nicaraguan Parliament and its highest court urged the Executive to initiate the withdrawal of the OAS. CRÉDITS: Archivo

The official described as “false” the reports presented by the Inter-American Commission on Human Rights (IACHR) and the Regional Office of the UN High Commissioner for Human Rights, stressing that they promote the “cruel campaign of aggressions” against the Nicaraguan people and division instead of “solidarity”. He added that they “cover up the perverse attacks against the population victimized by the coup perpetrators: humble Nicaraguans murdered, raped and wounded their homes razed and burned, the pain of families who suffered in living image the burning of their relatives by hordes encouraged and financed in 2018 by foreign governments and agents.”

He was referring to the violent protests financed from the United States in 2018 similar to the guarimbas instrumented in Venezuela of which such reports serve as “sounding boards”.

That same year China became the second largest buyer of Nicaraguan products after the United States, which does not seem a coincidence. The Asian country increased its purchases of sugar in addition to mineral products, prepared bovine hides and skins, waste paper and coffee gold, among others that it already bought.

Mision Verdad reports international news from the Bolivarian Republic of Venezuela, providing an alternative to the mainstream news media. Their mission is to report the truth (Verdad), exposing the corrupt globalist agenda. Their primary site is published in Spanish but they also have an English site available.