You are here: Home » Prophecies » “The Most Tumultuous, Confusing Time This Nation Has Known in Over 160 Years”
Share this post: 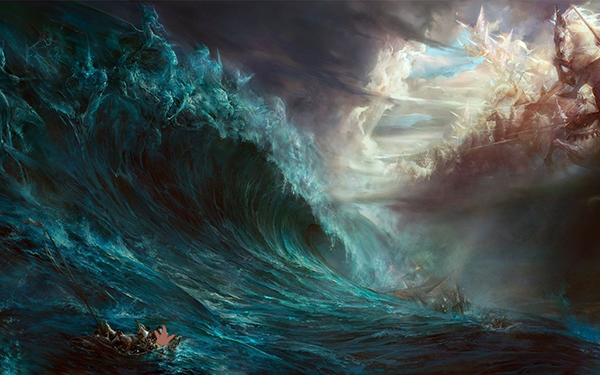 In his April 2016 newsletter, Prophet Chuck Pierce delivered a prophetic warning for America identifying April 25 2016 as a major turning point. Today, he re-issued the same warning in an email to his subscribers, as shown below. Chuck Pierce is founder of Glory of Zion International. I shared a small part of this message in my previous post, but the following provides the complete message.

“Starting Monday (April 25) through October 20, 2016 will be the most tumultuous, confusing time this nation has known in over 160 or 170 years. We have now crossed over into a time that will determine our future. I want you to know how you are connected in the Body of Christ. I want you to know the Body of Christ will not be the same. You stand at a crossroad and must know how to turn! This is a time that America determines its future! But understand this: this is a time that those leading the Kingdom of God must move into their next identity.

“I need My intercessors. You have entered into a time of the Tabernacle of David being exemplified and emerging in the earth. All religious culture across the earth must now shift. Be willing to be the Judah expression that creates MY prototype for the future. In Black America and the African nations, the expression of God will unseat a wrong movement that will vie for authority in days ahead. Only My people, in their culture, can unseat the violence and hate in their bloodline. The Asian church will rise up and create a prototype we’ve never seen. Israel will come into its greatest conflict since 1967. You have entered a new season! Let Judah arise!

“If you will shift into a new time of worship and declaration, I will set ambushes for your enemies. If not, they will ambush you. By My hand, I have set things for you to discover as you walk out your day. From the new prototype of war, praise, and leadership that I am arising in the earth, I WILL have a harvest of your enemies. The structure is in the blood and My Blood overcomes every other structure. But My Blood must be appropriated! I will have a people who bind the strongman and take his captured wealth. Know who you are! Know your enemy! But make Me and how I think your priority!”

April 25 on our calendar was Nisan 17 on the Hebrew calendar, so Chuck Pierce’s warning confirms the word received received by Z3 contributor Phanuel regarding Nisan 17, which identified it as the day of the new beginning. Phanuel’s word was also confirmed by equities markets all over the world being in a “sea of red” on Nisan 17, just as he stated.

Chuck Pierce identified April 25 through October 20 as the dates when America will go through the most tumultuous times in the past 160 or 170 years, which is an amazing statement considering all that has happened during that time. I believe his warning confirms other warnings of chaos surrounding the Presidential election, growing civil unrest, and a crash in the equities markets. Our enemy has planned great destruction for us, but we can fight back!

Chuck Pierce identified this period would be a crossroads in which we would determine what happens later depending upon several specific things we must do:

Our response can make an eternal difference in what happens next. We are in a war zone and it is time for God’s people to wake up, rise up, and fight back!

Chuck Pierce has now released his new book “A Time to Triumph” which depicts what he was shown through 2026. It can now be ordered from Glory of Zion website for $12.00 through September 15. Many have been waiting for this book.

“know how to turn” there is much in this statement. For the Elect of God, “the turning” is a full understanding of what one can conceive in the mind can take place in the natural. That indeed, the war we fight can be engaged through turning. If I “see” in my mind conquering the enemy of God, in the turning this actually takes place. I hope I have explain that appropriately. James please feel free to add to this. Kasey

James, I received a word regarding 100-160 days of chaos. This post caught my eye. 160 years equating to 100-160 days of turmoil? Also, the Federal Reserve is 103 years old… there is definitely some connection there. Central bankers are propping up this market for as long as they can… I ask for your prayers because I am receiving words almost hourly…it’s disorienting but peaceful at the same time because I know He is using me. I feel that I may have already been called to be a Joseph and the Lord is sealing His SERVANTS, the 144,000 SEALED in Revelation 7. PRAY FOR THOSE OTHERS WHO WILL BE CALLED AS WELL. I had a friend, Correy, tell me that a man prophesied over another man who was being called to be a Joseph!!! PRAISE GOD FOR HIS FAITHFULNESS!!!

Peace and blessings to you brothers and sisters!

The Day of the Lord

“And afterward,
I will pour out my Spirit on all people.
Your sons and daughters will prophesy,
your old men will dream dreams,
your young men will see visions.

Sobering, from Steve Quayle’s site:
Rolling Out The Red Carpet To Destruction

“A mind is a terrible thing to waste” and that is indeed a tragedy.
Innocence lost can never be regained and bears lifelong gravity.
This is a story of 3 little boys who had their innocence undermined
And a little girl who had hers stolen in an egregious and heinous crime.

While at play in what was believed the safety of her apartment complex,
Not in some far off land but in Idaho, USA, she is forced to reap the effects,
Of the folly of political correctness to make all believe that Islam is a religion of peace.
And at five years old she is attacked, her innocence ravaged by this religious beast.

Although the perpetrators were little boys the mastermind was a religious ideology,
Instilled in them at a tender age so they would cleave to its theology.
How could boys so young plan to commit such an evil deed?
I believe they too are victims, victims of the Islamic creed.

Now this little girl must live in constant fear along with her siblings, parents and neighbors.
How will she deal with this event as she grows? Will in her mind remain memory’s sabre,
Of the moment when she was robbed of safety, her childhood and innocence?
I hold that the greatest guilt belongs to those in Washington who are so insolent.

We have rolled out the red carpet with flowers and fanfare to destruction
There is no justice in the courts for they too have fallen to this seduction
To threaten our citizens and defend the infiltration of our communities,
And for political correctness they offer to any other all immunity.

Is Idaho an isolated event or is Idaho the Index Case for a coming epidemic
Of more Islamic nurturing of little boys to wreak on infidels hell’s endemic?
How much money changes hands to welcome falsely named refugees?
For 30 pieces of silver one can buy untold treachery.

If this little Idaho girl is the primary patient of this perverted pandemic
Your wives, your daughters and even your sons aren’t safe from the epidemic.
The pervasive attitude in this Nation is to quell the Gospel which is the vaccine
And our crumbling borders have destroyed the opportunity for quarantine.

Conspiracy theory, bias, racism, and islamophobia are all terms to hide the facts.
*“In a time of universal deceit-telling the truth is a revolutionary act.”
There are more victims than I have yet described in this unsightly tale
The remaining victims are the citizens of this country as we welcome the horseman pale.

I pray for those enslaved by the doctrine of Islam which is Jihad.
Jesus died for Muslims and desires to free from their bonds.
While we must recognize the need for prayer we must not forget
The followers of Islam accede to Sharia for Islam translated means submit.

If we continue to threaten the Word of God and the voice of reason with threats of arrest
Our children will be raped and our security stolen as common sense is suppressed.
The urine that was expelled upon a little girl’s innocent frame,
Will run through our streets mingled with our blood to America’s shame.

How many victims will suffer for how many years for a political goal?
The guilty, without repentance will ultimately be sentenced to Sheol.
Is your family safe? Have you sought your own repentance?
I would not face tomorrow without Jesus for the enemy is relentless.

The war is on and the battle may be coming to the place you live.
Pray for today’s victims and the peace that only Jesus gives.
Pray for the awakening of the people of this great land,
Pray there will be an end to vileness and a Godly flame is fanned.

Be watchful that you are not deceived by the enemy
He would have you face this battle without weaponry
Regardless of what may come tomorrow, “the weapons of our warfare are not carnal,
But mighty through God to the pulling down of strong holds,” and these weapons are eternal.

I was warned long ago not to trust Russia or China.

Great word of encouragement, James! This hour is not for the faint of heart, nor a time to shrink back. Our God has made us able. With His empowerment we can do what He has called us to do. May we all be found ever faithful, all the way to the end.

I saw foreign air troops invading the USA and landing on our flat farm land. They are after our crops. I feel this is what the book of Joel talks about.

God protected my family and I and showed us what to do in my dream!

The word of the Lord came to me on July 8, 2016..
“America is descending into Chaos, a Violent Chaos”

James,
Powerful and timely! The Lord showed me this morning how crucial it is that we commit everything to Him, to completely detach from this world, and keep our eyes and ears trained towards Him. He MUST be our only focus now. We have to be able to hear every Word, every instruction given, and be quick to obey.

Our Lord not only wants to see us through this storm, but His desire is that we bring many others through with us!
GB

Why is Patrick from Sponge Bob in the boat in the picture? 🙂

seeing if he has faith to cross to the other side