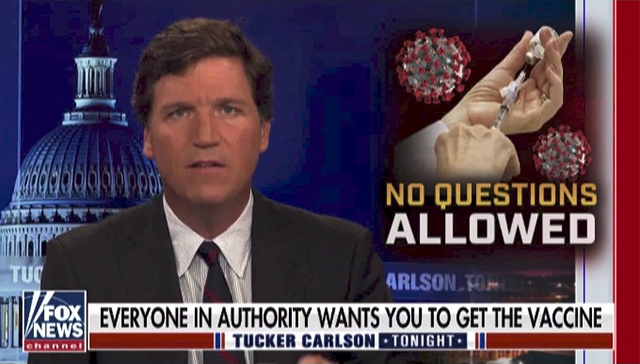 In his May 5, 2021 program aired on Fox News, host Tucker Carlson shared the CDC’s numbers for adverse events reported by recipients of the COVID-19 shots, as shown in the 15-minute video below. In previous years, sharing CDC numbers would not be a big deal, but since the start of COVID-19 shots in December 2020, a massive censorship campaign has been launched to prevent this. As a result, many sites have had their accounts shut down at major platforms including YouTube, Facebook and Twitter.

His presentation even goes against the narrative of his employer, Fox News, which has promoted the shots while avoiding mentioning the adverse reactions and criticizing those who have raised questions about it. So, I think he deserves a lot of credit for his courageous stand by simply asking what we would normally consider a logical question, “Shouldn’t we at least consider the risks?”

To put this in perspective, he pointed out,

“Every flu season, we give flu vaccines to over 160 million Americans. And every year a relatively small number of people seem to die after getting those shots. To be precise, in 2019, that number was 203 people. The year before that, 2018, it was 119 people. In 2017, it was a total of just 85 people who died after getting the flu shot.

So the question is, how do those numbers compare to the apparent death rate associated with the coronavirus “vaccines” now being distributed across the country? And these numbers come from the same set of government numbers that we just read to you from. Between late December of 2020 and April 23, 2021, a total of 3,362 people apparently died after getting the COVID shots in the United States.”

Tucker Carlson did not have access to the latest numbers since they were just released today through April 30, 2021, showing total reported deaths have already risen to 3,837. He concluded,

“For whatever reason, what is happening now with COVID “vaccines” is not even close to what has happened with previous vaccines.”

For example, he pointed out that in 1976, 45 million Americans received the swine flu vaccine. After 53 vaccine recipients died soon afterwards, the federal government stopped administering any further swine flu vaccines. Yet in 2021, the government has not even raised any concerns and has shut down anyone who even mentions the number of deaths and adverse reactions reported to the CDC.

As another example, during the 2010-2015 period, only one person died in the United States after receiving the menveo vaccine which is given to prevent bacterial meningitis.

To put these numbers in perspective, in the first four months of COVID-19 shots, more deaths were reported than from all previous vaccines combined during the 15-year period from mid-1997 to the end of 2013.

He also exposed the serious problem with VAERS numbers being under-reported, as revealed by a 2010 Harvard Pilgrim study funded by the Department of Health and Human Services which concluded that less than 1% of all adverse events ever get reported to the CDC VAERS. Which then led to his next question,

“If the vaccine injury reporting system is flawed, and clearly it is flawed, why hasn’t it been fixed? And more to the point, why has there not been an independent vaccine safety board empaneled to assess what is happening?… But amazingly, none of that has been done. No one even mentions the numbers. In fact, you’re not allowed to. You’ll be pulled off the Internet if you do.”

I found it interesting that Fox News routinely shares clips from his monologues on their YouTube channel, but for whatever reason, they skipped this one.