You are here: Home » Prophecies » Tsunami Coming to the East Coast of the United States
Share this post: 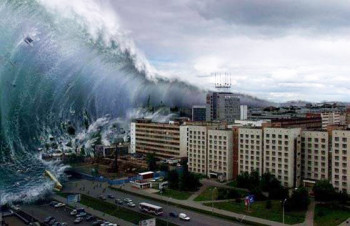 I had dream where I was on vacation with my family in a condo on the beach (in what felt like the east coast, somewhere between VA & Florida). I remember the front of the house that faced the water was all huge glass windows. I remember standing in the living room looking out at the ocean, when way off in the distance, I could see a dark line across the horizon that did not look normal.

As I watched, the dark line started to grow in thickness very rapidly. Then, it came into view and I realized it was a wall of water coming at the beach house with intense speed. I remember being mesmorized by the line in the distance that was getting bigger and bigger by the second. By the time I knew what it was and started screaming to the rest of the people in the house, it was already too late.

The wall of water looked like the wall of water in the movie “The Day After Tomorrow”. I’ve never seen anything like it. I received that dream soon after I was first saved in 2002. I can only imagine that it was part of the same vision God showed me in 2008 in which I saw the state of Florida under deep water.