You are here: Home » News » Jesuit Agendas » Political News » “Trump Will Become President. He Will Be Used to Clean and Purify the Nation.”
Share this post: 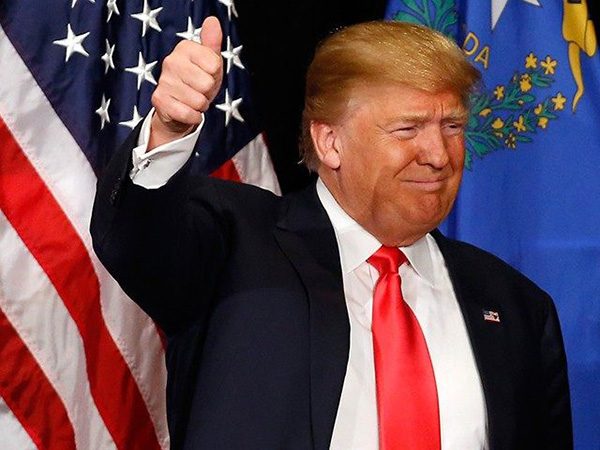 Speaking in session ten of the 2016 Lancaster Prophetic Conference on August 13 2016, Sadhu Sundar Selvaraj shared the following message starting at 2:41:30 in the video shown at the bottom of this post and continuing for about nine minutes. The following text is a transcript of that part of his message.

I will stand on my guard post and station myself on the rampart; and I will keep watch to see what He will speak to me, and how I may reply when I am reproved. (Habakkuk 2:1)

That is what it is. And when you wait on God, you will participate in one of three gatherings. Number one, the gathering of God. I call it God’s gathering. See Job 1:6 and 2:1, Isaiah 6:1-8 and 42:9, and 1 Kings 22:19-23. This is a gathering where people, saints in heaven, and even some saints on earth will be caught up to heaven and they will participate in this gathering before God where proclamations are made, where the will of God is met.

Last year, I was caught up to such a gathering and a very important announcement on Rosh Hashanah day last year. I was fasting and praying in Jerusalem. When I was caught up and the Lord was making very important assignments, an announcement, and I witnessed that. So, that is the first kind. You participate in the gathering of God. That is the first kind.

I have been privileged by the grace of God to participate in that council as a member of the council to hear decisions they make and to discuss about issues of nations. The first time that I ever went to the council was in the year 2008, just before the U.S. general elections. That was the first time that Mr. Obama was running for election. I went to this council and Abraham is the chairman of this council. And he asked me to come closer to him, so I stood closer. He had a file in his hand and on the file was written the word U.S.A. And he looked at the file and he said, ‘Obama will be elected President.’

You know, that was the year (Sarah) Palin and the other guy, what was his name? John McCain, they were running for election and all Christians were working for that group. So I pleaded in his behalf. I said, ‘Sir, we don’t want this Obama. We want this group.’

So I was told, ‘Now go and tell the people.’

This was one week before the election. Then when the second term came, the same thing happened. I was again caught up to the council and I heard them discussing. It is what we have decided.

Now you are in the midst of a new election, but you know but I must tell you something honestly. In the past, I was quite concerned about the U.S. general elections, but this year I just wouldn’t be bothered. I just didn’t know why. I just wasn’t interested at all. I didn’t want to bother to even find out, God what do you think? Who will be standing in that office? I didn’t even bother. It was totally out of my mind; you know? But on the first night when Brother Neville Johnson was preaching, and while he was preaching, I was just looking at him preaching, suddenly I was caught up in the spirit and I found my soul standing before the council, the very council where I always used to go and I saw father Abraham and I was standing beside him. And I was very surprised to see Donald Trump come and stand in that room. This is what I was told,

This was the vision that I saw on the 10th of August at 8:23 pm. Since I was told not to share, I just kept it to myself and I wasn’t planning to share this at all, but while we were seated there I showed this to Brother Neville. I said, ‘Does this bear witness to you?’ I asked him and he said, ‘100% I agree with this.’

So first we had an agreement and now I am sharing with you what I saw in the council.

You see, this is one of the privileges when you walk with God. You will be caught up in the council to hear decisions that are made in heaven and then to know the seasons and the times in which we are living and how to conduct ourselves. Even sometimes to forewarn what is going to come to pass.

The third kind of gathering is the communion of the saints. Now, this I am sure you are already very familiar with. You have heard this over and over again. See Hebrews 12:1, Zechariah 3:7-8, and a good example that I shared with you the other day is John’s example in Revelation 1:1 when an angel, which was not an angel, but a saint, a prophet in heaven. See Revelation 22:7-9 and you can also read the experience of the prophet Daniel in Daniel 8:13-19. He also participated in the communion of the saints in his time.”

.I believe God can chose the least of us to do the most, and who are we to know what is in God’s mind or his plan. Some of us are here to merely witness . I think God’s favored are the people that God chooses to be his messengers …his prophets and their track record stands on it’s own. God leads his favored. I was shown judgement that involves a massive earthquake and tsunami I saw millions homeless, and people living outside with nothing to do it was a bad scene for sure. What is bizarre is we are seeing a massive homeless population here in Portland Or this I was telling people years ago that was revealed to me, but in my vision it will only get worse . There is still time to pray, meditate and fast

The church and many Christians gather a very dark legacy for themselves. They didn’t show love, but judgment. Instead of seeking Union, they spread division. Trump is one of the promises for the lasts days. In the book of revelation, two beasts were promised, the antichrist and the false prophet. They will pass as saviors of the mankind and will fool many people.

In last day God dont bring a union..but Division between Goat and Sheep..He bring justice and His Wrath in last days..

It’s America’s government’s involvement in satanism and her spreading it worldwide which will result in her demise. Quit blaming the Christians. Also, partnering with the “sons of god” and betraying humanity and committing sins against Yahweh’s natural laws. God will not be mocked.

it agrees with Nita Johnson vision. she said in 2012 God told her he would put a Cyrus in the white house Mark Taylor simular things about trump.. However, I am a little skeptical about some of his past claims such as Jesus there is no pre-trib rapture when others like Maurice Sklar and Ken Peters saw a pre trib rapture though let me be fair in saying Ken only saw the resurrection of the dead but maurice said it was saints also. They only know and prophesy in part so I always look for confirmations. so we got their weight their words careful because even those who have been walking with God for years can get it wrong.

Let us pray and let God Guide Trump for ruling the nation and make it even more beautiful. let us not judge but pray instead. Let us look forward not to look past…… past will never do any things. But let us pray and seek God’s guidance for him. And a leader must know few lesson from Bible as follow:

16 But after Uzziah became powerful, his pride led to his downfall. He was unfaithful to the Lord his God, and entered the temple of the Lord to burn incense on the altar of incense. 17 Azariah the priest with eighty other courageous priests of the Lord followed him in. 18 They confronted King Uzziah and said, “It is not right for you, Uzziah, to burn incense to the Lord. That is for the priests, the descendants of Aaron, who have been consecrated to burn incense. Leave the sanctuary, for you have been unfaithful; and you will not be honored by the Lord God.”

19 Uzziah, who had a censer in his hand ready to burn incense, became angry. While he was raging at the priests in their presence before the incense altar in the Lord’s temple, leprosy[a] broke out on his forehead. 20 When Azariah the chief priest and all the other priests looked at him, they saw that he had leprosy on his forehead, so they hurried him out. Indeed, he himself was eager to leave, because the Lord had afflicted him.

21 King Uzziah had leprosy until the day he died. He lived in a separate house[b]—leprous, and banned from the temple of the Lord. Jotham his son had charge of the palace and governed the people of the land.

I just listened to Trunews interview update between Rick Wiles and Mark Taylor which was recorded on 11/9/16. This streamcast is called “Trump Prophecy Fulfilled”. Many of you would find it interesting. Mark said many things will be overcome if we continue to press in with prayer.

and further – is judgement now postponed even tho some have said it was set?

well – that has set the cat amongst the pigeons. many are now going to have to recant on what they have said, “prophesied”, and publicly apologise for their erroneous comments and that includes many loved prophets prophetesses.
trump has been elected president. the election wasnt suspended, it wasnt postponed it wasnt shut down due to martial law and obama isnt the last president of the united states – i never actually believed he was a true president anyway –
the above comments from sadhu also make a mockery of a comment from someone that trump would be elected then assassinated.
i hope they will humble themselves and acknowledge their mistake. lets face it – sometimes we get things wrong.
congratulations mr trump

There are many “Christians” in Sadhu Sundar Singh’s home state in India baying for his blood and ready to declare him a false prophet. It is not easy for him to publicly declare such an easily verifiable prophecy. Now that Trump has won, they will be disappointed.

Hi Edison
He has talked about those Christians a few times. They really want his head, but always end up disappointed. Sadhu is a true friend of God and one of the few true prophets around.

There are 2 kind of rejection:
1. Sadhu so hard about living in holines that may some people who want following christ but still love the flesh

How can you judge? Look at the fruits

I mean…point 1..people reject him because they still love the flesh as christian and sadhu so hard to them

Italy is shaking again violently. Please keep italy in prayers if you are willing….
http://www.dailymail.co.uk/news/article-3875648/Powerful-earthquake-hits-ancient-city-Rome-central-Italy.html

Praying…..have friends not far. Thanks for sharing.
Bless you Chloe.

Ouch. That sounds like such a terrible disaster. Definitely praying.