You are here: Home » Prophecies » Trojan Horse Rolled Down the Street But No One Paid Attention
Share this post: 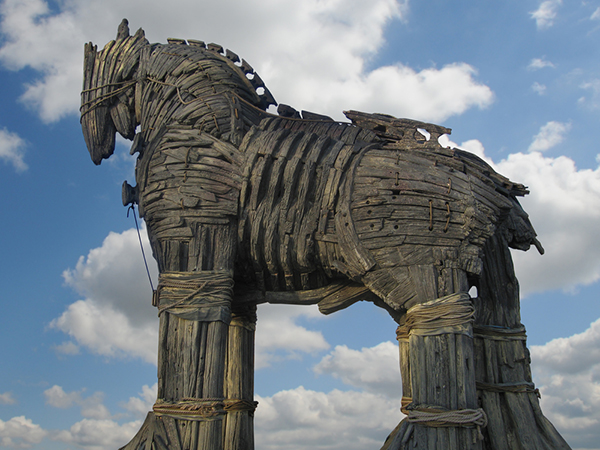 On July 27 2016, I dreamed I was in a city with lots of tall buildings walking on the street with a sister in Christ.

I saw a very large airplane fly very low overhead just over the tops of the buildings. It looked like a typical cargo plane. Then I saw many helicopters flying together like in a pattern. This was all very ominous.

Then I saw a huge horse structure that looked to be about five stories tall and I thought to myself “Trojan Horse.” It looked to be in the shape of an actual horse but was very tall and perhaps the length of a football field. It seemed to be rolling down the street over about a block from where we were.

My friend and I knew we needed to get across town away from this area and wanted to buy a bus ticket, but neither of us had any money or the right card to swipe to gain access to the bus.

Then the scene changed and we were in an apartment building. I knew I needed to change my clothes into something more appropriate. I looked in the closet, but only saw frilly, girly clothes. I wanted to find something to wear that would cover me. Nothing in the closet seemed ideal. End of dream

Interpretation:
The first part of the dream can be interpreted quite literally. What I saw was a representation of a (near) future time when our “own” (supposed) military and police will be active in our skies and in our streets. It will become “normal” to see military aircraft such as planes and helicopters in our skies patrolling and protecting. In the dream I felt an inner conflict while seeing the planes that somehow I knew they weren’t directly foreigners attacking us, but at the same time, I knew that the military crafts were not “friendly” towards me. This felt like a time of marshal law and also a time when the police and military were on high alert against attacks.

The Trojan Horse is profound. I believe seeing an actual Trojan Horse in this dream is a clear warning for our nation to be on guard. America will be invaded in a hidden way, but God wants us to be aware of the invasion and to be looking for it, unlike the citizens of Troy who opened their gates to the enemy unknowingly.

Because the horse was a block away, but in view, I believe this indicates that once the invasion occurs we will have a short amount of time to find safety. The Trojan horse seemed to roll down the street, but no one else was paying attention. I could see it and I knew something was not right. In other dreams and visions I have had, I was shown UN forces would move across our country. I believe our government leaders at the very top will welcome foreign troops under the guise of helping us restore order, but that in reality, many thousands of citizens and especially Christians will be persecuted, held in captivity, and killed.

From Wikipedia:
The Trojan Horse is a tale from the Trojan War about the subterfuge that the Greeks used to enter the city of Troy and won the war. In the canonical version, after a fruitless 10-year siege, the Greeks constructed a huge wooden horse, and hid a select force of men inside. The Greeks pretended to sail away, and the Trojans pulled the horse into their city as a victory trophy. That night the Greek force crept out of the horse and opened the gates for the rest of the Greek army, which had sailed back under cover of night. The Greeks entered and destroyed the city of Troy, decisively ending the war.

Metaphorically a “Trojan Horse” has come to mean any trick or stratagem that causes a target to invite a foe into a securely protected bastion or place.

In the next part of the dream, me and a sister in Christ needed to get away from this area but we were not prepared. This speaks to the need for every child of God to become prepared now. No more waiting. No more putting it off. We must become prepared spiritually with hearts that have been healed so that the enemy has no more legal right to come in, and so that we can hear the voice of God clearly.

Not being able to buy a bus ticket has to do with preparation in the physical, but I believe that it also has to do with true Christians, followers of Jesus, who no longer choose to be a part of the Babylonian system that is prevalent throughout the world today. I am reminded of the mark of the beast that is coming in the years ahead when we must be prepared with discernment to make the only choice that leads to eternal salvation:

“And that no man might buy or sell, save he that had the mark, or the name of the beast, or the number of his name.” (‭‭Revelation‬ ‭13:17‬ ‭KJV‬‬)

In the last part of the dream, I had found shelter, but knew that I needed to get away to really find safety. I was trying to find something different to wear because what I had on was not appropriate, and the clothes I had to put on from the closet were not right either. It was like I was going to have to settle for what I had, even though I knew it wasn’t going to help me or work well. This also speaks to preparation in the physical and spiritual. There is going to come a time when the work we’ve done in the Lord is either going to see us through, or we are going to be left unprepared.

We are instructed to put on the full armor of God now, not later, so that we can be protected and also be prepared to battle against the one true enemy, Satan and his hoards.

11 Put on the whole armour of God, that ye may be able to stand against the wiles of the devil.
12 For we wrestle not against flesh and blood, but against principalities, against powers, against the rulers of the darkness of this world, against spiritual wickedness in high places.
13 Wherefore take unto you the whole armour of God, that ye may be able to withstand in the evil day, and having done all, to stand.
14 Stand therefore, having your loins girt about with truth, and having on the breastplate of righteousness;
15 And your feet shod with the preparation of the gospel of peace;
16 Above all, taking the shield of faith, wherewith ye shall be able to quench all the fiery darts of the wicked.
17 And take the helmet of salvation, and the sword of the Spirit, which is the word of God:
18 Praying always with all prayer and supplication in the Spirit, and watching thereunto with all perseverance and supplication for all saints;
19 And for me, that utterance may be given unto me, that I may open my mouth boldly, to make known the mystery of the gospel,
20 For which I am an ambassador in bonds: that therein I may speak boldly, as I ought to speak.
‭‭(Ephesians‬ ‭6:11-20‬ ‭KJV)‬‬

In the dream, other people were just going about life. They weren’t paying attention to all the signs of reduced freedoms with the heightened security and patrols, and they weren’t able to see the threat though it was right in front of their faces 75 feet tall and 100 yards long. As scripture instructs us, when we are being told to not worry because there is peace and safety, destruction will come suddenly.

I asked, “Jesus, what do you want to say about this dream?”

I heard, “I never cease to call out to my sleeping body. Awake and come to me. I am right here, ready to receive you. The time for gathering the oil is nearly over. Will you be ready to receive me?”

1 Then shall the kingdom of heaven be likened unto ten virgins, which took their lamps, and went forth to meet the bridegroom.
2 And five of them were wise, and five were foolish.
3 They that were foolish took their lamps, and took no oil with them:
4 But the wise took oil in their vessels with their lamps.
5 While the bridegroom tarried, they all slumbered and slept.
6 And at midnight there was a cry made, Behold, the bridegroom cometh; go ye out to meet him.
7 Then all those virgins arose, and trimmed their lamps.
8 And the foolish said unto the wise, Give us of your oil; for our lamps are gone out.
9 But the wise answered, saying, Not so; lest there be not enough for us and you: but go ye rather to them that sell, and buy for yourselves.
10 And while they went to buy, the bridegroom came; and they that were ready went in with him to the marriage: and the door was shut.
11 Afterward came also the other virgins, saying, Lord, Lord, open to us.
12 But he answered and said, Verily I say unto you, I know you not.
13 Watch therefore, for ye know neither the day nor the hour wherein the Son of man cometh.
‭‭(Matthew‬ ‭25:1-13 KJV)